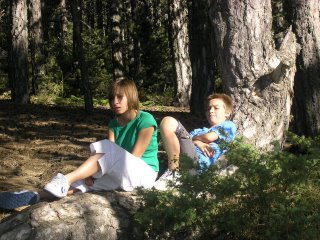 Today is the feast of Santa Lucia, one of the patron saints of my daughter, Andrea Lucia.


St Lucy of Syracuse : Lucy was born toward the end of the third century and lived in Syracuse, Sicily. She was the daughter of very noble and rich parents. Her father died when she was still young. Lucy secretly promised Jesus that she would never marry so that she could be his alone. She was a lovely girl, with beautiful eyes. More than one young noble set his heart on her. Her mother urged her to marry one whom she had chosen for Lucy. But the girl would not consent. Then she thought of a plan to win her mother. She knew her mother was suffering from hemorrhages. She convinced her to go to the shrine of St. Agatha and pray for her recovery. Lucy went along with her and together they prayed. When God heard their prayers and cured
her mother, Lucy told her of her vow to be Christ's bride. Her mother let Lucy follow her vocation, out of gratitude for her cure. But the young pagan to whom she had promised Lucy was furious at losing out. In his bitter anger, he accused her of
being a Christian. He threatened her with the frightening torture of being blinded. But Lucy was even willing to lose both her eyes rather than belong to anyone but Jesus. And that is just what happened. Many statues show St. Lucy holding her
lovely eyes in the palm of her hand. Jesus rewarded her for her heroic love. He worked a miracle and gave her back her eyes, more beautiful than ever. The pagan judge tried to send the saint to a house of sinful women. He hoped that Lucy might be tempted to give up Christ. But when they tried to carry her away, God made her body so heavy that they could not budge her. In the end, she was stabbed and became a martyr for Jesus in the year 304. Her name in Latin means Light and, as her
feast-day fell in December, she became associated with the one true Light who was coming as the redeemer of the world, the Light that would lighten the nations, the Light that would banish darkness and let the eyes of all behold Truth incarnate.
In many countries, and Scandanavia in particular, her feast day is celebrated with the youngest daughter of the family wearing a crown of candles and bringing in the first meal of the day.

Caption I wrote somehow didn't make it on to the page:

Andrea (left), and brother, Winslow, in the Troodos Mountains of Cyprus.

Beautiful children, Albion! (though Winslow would probably perfer a different adjective)
You must be doing something right.
ed