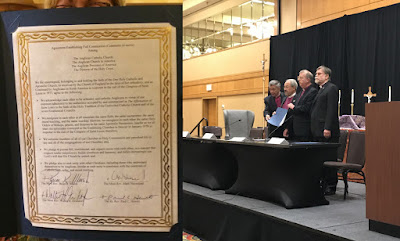 As promised, I write my reflections on the 2017 Joint Anglican Synods. For those not knowing what it was, the Anglican Diocese of the Holy Cross (DHC), the Anglican Province in America (APA), the Anglican Church in America (ACA), and the Anglican Catholic Church (ACC) came together last week in Atlanta Georgia. Each jurisdiction held the business sessions necessary to a provincial synod separately, inasmuch as those meetings are about all sorts of specific things, many of which are put to a vote, some involving budgets, etc. But the spiritual and social activities, from church services to meals, were all held together. On the last day of the gathering, Friday October 6, all synod business having been concluded, everything was done together. In the morning, the four leading bishops signed the agreement for full communion. This was followed by a man calling out "Praise God!" and a spontaneous rendering, sung by all of us, of the Doxology. A little bit later the four jurisdictions held a Mass together.

Whether they drew lots or simply discussed who would do what (I can ask my Archbishop if anyone thinks it matters how), the celebrant was Bishop Paul Hewitt, and the preacher was Bishop Grundorf. In his sermon, Bishop Grundorf preached on the theme "For such a time as this," words of Mordecai from the Book of Esther. As the keynote address the night before, by Fr. Charles Clendenin, Bishop Grundorf's sermon was direct, to the point, and very honest about the forty years long of our wandering (Psalm 95:10). He also spoke to the times in which we find ourselves, and about the challenges and opportunities before us. I believe both men were more than a keynote speaker and a homilist. They spoke as prophets, as I said this past Sunday in my own sermon (at this link you may find the sermon for the 17th Sunday after Trinity 2017).

Earlier, when the four leading bishops were preparing to sign the agreement, Bishop Hewitt spoke of the "hand of God" on us, and of "the anointing" of the Holy Spirit. When considering the Biblically significant number of forty years (since the St. Louis Congress in 1977), and the leading of four bishops (evoking the memory of the first four Continuing bishops of the Denver Consecrations a few months after the Congress of St. Louis), it does appear that God Himself is the One Who has arranged these events, and Who is speaking to us "for such a time as this." I believe that God Himself judged it best for us to wander in division until He cleansed out from us much of the sins and error still in our old Episcopal Church and Church of Canada hard hearts, most especially the deadly sin of pride. As the ancient prophets of Israel told on their own people, and as the people eventually heard it to become a people prepared by God, so it is for us at this time.

For my own reflections to be complete for you, I recommend hearing the sermon I preached two days later, as I linked above.

Press conference during the Joint Synods

The hymn you hear is very appropriate. This was during the receiving of the Holy Communion. Check this spot for my reflections on the 2017 Joint Synods Mass, which I will be writing and posting soon.
Posted by Fr. Robert Hart at Saturday, October 07, 2017 2 comments:

of the collection taken at the 2017 Joint Synods Mass will be used to help ACA parishes and people in Puerto Rico, because of the terrible damage from the hurricane.

I will write my impressions of the Joint Synods after discharging the usual duties of my ministry here brought on by what seems to be, after this week, the sudden arrival of the weekend. Suffice to say, it is the hand of God at work that has created this new beginning after the biblically significant period of forty years.
Posted by Fr. Robert Hart at Saturday, October 07, 2017 No comments:

You can listen in to the Evensong service we just completed, thanks to Fr. Richard Tarsitano at St. Michael and All Angels Anglican Catholic Church, by clicking here.
Posted by Fr. Robert Hart at Thursday, October 05, 2017 No comments:

The joint Anglican synods are well underway in Atlanta Georgia, marking a new and long overdue initiative by leading bishops to unify the Continuing Church. I am busy taking part, and will write about it when I return. In the meantime I may be able to post a bit here and there as time permits.
Posted by Fr. Robert Hart at Wednesday, October 04, 2017 No comments: