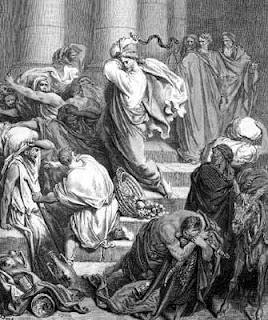 Rom. 13:8-14 * Matt. 21:1-13
For us, today is New Year’s Day. Advent is the first season of the Church year, and the idea of New Year’s resolutions ought to pale in comparison to the God-ward turning that is represented by the first of our two major Penitential seasons. I hope we all understand why we must resist the emphasis on shopping and the secular pressures about holiday preparation that compete for our attention. The world has decided that “Christmas” is the name of a shopping season that runs between Thanksgiving Day and the Feast of Saint Stephen on December 26th. Don’t give in.

The spirit of the world wants to take away your Advent, and then your Christmas too. Christmas is, first and foremost, a feast of the Church, named, as it is, the Christ Mass. It is the feast of the Nativity (in the glorious light of the Incarnation of the Word). The emphasis is on Christ’s coming in the flesh and taking human nature into His uncreated, eternal divine Person: and, only in this understanding is it a celebration of His birth in Bethlehem, when "the babe, the word's redeemer, first revealed His sacred face."

One "pop" song, that frequently adds to the noise pollution in public places and stores, is a song that I absolutely hate. It is called “Do you hear what I hear?” It removes the Divinity of Christ from the picture, and celebrates nothing more than the birth of, as the song so vacuously says, “a child, a child, freezing in the cold.” The song ends with the king saying to the people everywhere, “pray for peace people everywhere.” Is that really what the king said? Was it not, rather, “go and kill every male child under two years old, and bring me word again,” in a mad effort to destroy Christ? The voice that the world wants to hear is the voice of the spirit that was in Herod. That spirit wants to kill Christ, to take away your Christmas, and, before that, your advent.

Advent is very important for what it is. It is not Christmas, not yet. Frankly, I wish we did not even put up our trees before Christmas Eve, like it used to be. But, even so, remember this: Christmas starts on the 25th of December and lasts until January 6th. But, for now, it is Advent; it is a Penitential season. We have before us two passages from the New Testament, rich with the meaning of Advent, to start us off. Advent did not originally prepare the Church for a celebration of the birth of our Lord, but rather for His coming again in glory; it is the season with eschatological meaning, looking to the future. Now, the word eschatological (or eschatology) comes from the word Eschaton. It means the End. And, therefore we emphasize the last things of the resurrection and eternity: Death, judgment, Heaven and Hell. Mostly, we emphasize the coming again of Jesus Christ in glory to judge the quick and the dead.

So, the Epistle reading gives us clear warning to turn from sin, to repent and live in the light. And, the Gospel reading gives us a glimpse of Christ coming as king and meting out judgment. First let us consider the Epistle. On the subject of self-examination and turning from sins, we really have to ask God to show us the truth about ourselves. It is not wise to trust our own opinion of ourselves. Jesus said, “Men loved darkness rather than light because their deeds were evil.” Sadly enough, that is the truth about everybody. We would rather not see the truth about ourselves, or hear what the Holy Spirit brings to our attention. So, we have defense mechanisms. The first is comparison. “I am not as bad as this publican.” Jesus said to the Pharisees and the Sadducees, “the harlots and the publicans (that is, tax collectors) enter into the kingdom of heaven before you, because they repented at the preaching of John [the Baptist].” So much for the comparisons they were making. Yes, there is always someone worse than you. When all else fails, I like to remind myself that I am better than Hitler, because I have not killed a few million people lately. However, it is better for me to read the Sermon on the Mount, and take it to heart, praying that the Holy Spirit will shine His light on my sins, even though that particular light hurts my eyes.

Another method is the group guilt dodge. In fact this is among the most dangerous things we can do. I am convinced that many people whom I have known, avoid repenting of their own real sins by lamenting the guilt of their group. They deplore and repent of the sin of white racism, or something like that- something safe. Adding danger to danger, they seem to feel quite meritorious and self-satisfied, because they have convinced themselves of their own moral superiority by “repenting” of a group sin- especially since they are truly convinced that they are, actually, above such a thing in real life. In certain circles this dodge is quite popular, a real favorite. It is about as genuine a form of penitence as the hypocrisy of the Pharisee, who said: "I thank Thee God that I am not as other men are." It is self-deception.

The worst kind of penitence is when someone feels proud for repenting of the group sin.

Now, it may seem strange that I have said of today’s Gospel that, in it, we see a picture of the future. The story is, after all a true account of events that happened in the past. In fact, when Jesus entered into Jerusalem, he was hailed as a king by the cheering crowds who met Him. And the prayers of the crowd angered the powers of earth. The people cried “Hosanna to the Son of David.” This means two things. They were crying out to Him to be their Savior. “Hosanna” is not a joyful word. It is a cry asking to be saved. It contains a form of the very Name of Jesus, that is, the Name Yeshua- meaning “Savior.” They identified Him as the Messiah, the Son of David. And, as soon as He entered the city and the temple, He meted out His judgment, cleansing it of the dishonest cheats who had perfected a system to defraud the poor, hard working Jewish worshipers. Later, about the Final Judgment on the Last day, Saint Peter would write: “For the time is come that judgment must begin at the house of God: and if it first begin at us, what shall the end be of them that obey not the gospel of God? And if the righteous scarcely be saved, where shall the ungodly and the sinner appear? (I Pet. 4: 17,18)”

In every way, the story of what the Lord Jesus Christ did that day, is a picture of what He will do when He comes again. He did not yet bring the kingdom in its fullness; but he did bring the kingdom to bear on the House of God. When we pray “Thy Kingdom come,” we ask that He bring His rule to bear upon us: His rule, “his government and peace” which is unending upon the throne of David. To the measure that we mean that prayer, our comfortable world will be shaken up. But, it is better to be shaken now than at His coming again in glory on the Last Day.

In this Gospel passage, we see important elements of His Second Coming, elements that are true to the Person of the Son of God, the everlasting Son of the everlasting Father. He is the only king and savior. He is the judge “Whose fan is in his hand, and he will throughly purge his floor, and gather his wheat into the garner; but he will burn up the chaff with unquenchable fire (Matt. 3:12).” Judgment will begin at the House of God, until His whole creation is cleansed and purified, made ready for a habitation of His righteousness, a dwelling place of His glory among men. The purpose of a Penitential season is to learn to sharpen and focus our self-examination, the same self-examination that we should do every time we draw near to receive the Body and Blood of Christ. I know that a “feel good” religion is the popular model for success in today’s “spiritual” market; but the only good feeling we should ever trust is that spoken of by the Psalmist: “Blessed is he whose transgression is forgiven, whose sin is covered (Psalm 32:1).”

Audio of sermon for Christ the King, preached at St. Benedict's 2016
Posted by Fr. Robert Hart at Sunday, November 20, 2016 No comments:

To my fellow American Christians

“I exhort therefore, that, first of all, supplications, prayers, intercessions, and giving of thanks, be made for all men; For kings, and for all that are in authority; that we may lead a quiet and peaceable life in all godliness and honesty. For this is good and acceptable in the sight of God our Saviour; Who will have all men to be saved, and to come unto the knowledge of the truth.(I Timothy 2:1-4).”

Let me do a bit of preaching to my fellow Christians. I know it is irresistible to criticize, analyze, and even to attempt to prognosticate. However, as the above quotation teaches, whatever else we say, this is one directive about what we ought to do with our tongues, whatever else we may freely say.

O LORD our Governor, whose glory is in all the world; We commend this nation to thy merciful care, that being guided by thy , we may dwell secure in thy peace. Grant to [Barak] THE PRESIDENT OF THE UNITED STATES, [and to Donald our President elect] and to all in Authority, wisdom and strength to know and to do thy will. Fill them with the love of truth and righteousness; and make them ever mindful of their calling to serve this people in thy fear; through Jesus Christ our Lord, who liveth and reigneth with thee and the Holy Ghost, one God, world without end. Amen.