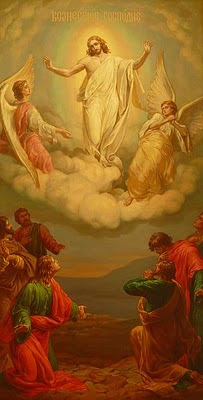 The opening of the Book of Acts should remind us of an Old Testament story that foreshadows Christ's Ascension.

And Elijah said unto him, Tarry, I pray thee, here; for the LORD hath sent me to Jordan. And he said, As the LORD liveth, and as thy soul liveth, I will not leave thee. And they two went on. And fifty men of the sons of the prophets went, and stood to view afar off: and they two stood by Jordan. And Elijah took his mantle, and wrapped it together, and smote the waters, and they were divided hither and thither, so that they two went over on dry ground. And it came to pass, when they were gone over, that Elijah said unto Elisha, Ask what I shall do for thee, before I be taken away from thee. And Elisha said, I pray thee, let a double portion of thy spirit be upon me. And he said, Thou hast asked a hard thing: nevertheless, if thou see me when I am taken from thee, it shall be so unto thee; but if not, it shall not be so. And it came to pass, as they still went on, and talked, that, behold, there appeared a chariot of fire, and horses of fire, and parted them both asunder; and Elijah went up by a whirlwind into heaven. And Elisha saw it, and he cried, My father, my father, the chariot of Israel, and the horsemen thereof. And he saw him no more: and he took hold of his own clothes, and rent them in two pieces. He took up also the mantle of Elijah that fell from him, and went back, and stood by the bank of Jordan; And he took the mantle of Elijah that fell from him, and smote the waters, and said, Where is the LORD God of Elijah? and when he also had smitten the waters, they parted hither and thither: and Elisha went over.
II Kings 2:6-14

Do you see in this story why the response is given to the priest, "and with thy spirit," rather than "and also be with you?" "The spirit of Elijah" does not refer simply to his own spirit, but to the grace of the Holy Spirit giving supernatural gifts to his human spirit. A careful reading of II Kings shows that Elisha goes on to do exactly everything in his miraculous ministry double what Elijah had done. For example, Elijah brought one child back to life, and Elisha brought two people back to life (one by relics, when the dead body of a young man was restored to life as his body touched Elisha's bones). Elisha did greater works than Elijah, that is, greater in number.

When we consider the Ascension, we must pay attention to the emphasis given by these scriptures to the coming of the Holy Spirit, so that the Apostolic Church would continue the ministry of Christ as an extension of his incarnation in the fallen world.

Ye shall receive power, after that the Holy Ghost is come upon you: and ye shall be witnesses unto me both in Jerusalem, and in all Judaea, and in Samaria, and unto the uttermost part of the earth. And when he had spoken these things, while they beheld, he was taken up; and a cloud received him out of their sight. And while they looked stedfastly toward heaven as he went up, behold, two men stood by them in white apparel; Which also said, Ye men of Galilee, why stand ye gazing up into heaven? this same Jesus, which is taken up from you into heaven, shall so come in like manner as ye have seen him go into heaven. Acts 1:8-11

Just as the prophet or prophets who wrote the Books of the Kings made points when writing about the foreshadowing, St. Luke has written these same points into his account of the fulfillment. Jesus tells them that they will receive power after the Holy Spirit will come upon them. They beheld him as he went up, just as Elisha beheld Elijah; or rather, Elisha had to look upon Elijah so that the scripture could foreshadow the fulfillment by Christ. With their eyes on his translation into that hidden dimension that surrounds us, called Heaven, the disciples beheld Christ as he is in spirit. That is, the incarnate Son of the Living God, a sight known as given only by the Holy Spirit. They saw the man who is firstborn, which means rightful heir, owning all of creation. They saw that his proper place is not in the fallen world, but at the Father's right hand.
They looked as the cloud took him out of their sight, presumably the cloud of witnesses who rose with him, as he lad captivity captive; and the disciples met to pray for ten days until he gave gifts to men, dividing the spoil with the strong- made strong because they receive the power (δύναμις) of the Holy Spirit.1

We have been led to think of the Ascension as Christ's coronation. This is not the emphasis of the scriptures, because the New Testament clearly reserves that significance to the day in which he will come again in glory to judge the living and the dead, when the Father will put every enemy under his feet. These scriptures we have read are concerned, rather, with the continuation of Christ's own charismatic (χάρις) ministry through his Church, to spread the Gospel to all nations in the working out of salvation among all peoples of the earth.2 "Verily, verily, I say unto you, He that believeth on me, the works that I do shall he do also; and greater works than these shall he do; because I go unto my Father." (John 14:12) Elisha saw Elijah, and did greater works, double the number in fact. The Apostles saw Christ as he was taken out of their sight by the cloud, and the Church does greater works, because it is in many places where the Holy Spirit uses many hands to continue the works of Jesus Christ.

The emphasis on the Ascension that we receive from the scriptures we have read this day is expressed by Saint Paul.

But all these (charisms) worketh that one and the selfsame Spirit, dividing to every man severally as he will. For as the body is one, and hath many members, and all the members of that one body, being many, are one body: so also is Christ. For by one Spirit are we all baptized into one body, whether we be Jews or Gentiles, whether we be bond or free; and have been all made to drink into one Spirit. For the body is not one member, but many...Now ye are the body of Christ, and members in particular. And God hath set some in the church, first apostles, secondarily prophets, thirdly teachers, after that miracles, then gifts of healings, helps, governments, diversities of tongues. Are all apostles? are all prophets? are all teachers? are all workers of miracles? Have all the gifts of healing? do all speak with tongues? do all interpret? I Corinthians 12:11-14, 27-30

Wherefore he saith, When he ascended up on high, he led captivity captive, and gave gifts unto men. (Now that he ascended, what is it but that he also descended first into the lower parts of the earth? He that descended is the same also that ascended up far above all heavens, that he might fill all things.) And he gave some, apostles; and some, prophets; and some, evangelists; and some, pastors and teachers; For the perfecting of the saints, for the work of the ministry, for the edifying of the body of Christ: Till we all come in the unity of the faith, and of the knowledge of the Son of God, unto a perfect man, unto the measure of the stature of the fullness of Christ. Ephesians 4:8-13

These lists of gifts are different, along with yet other lists different still. What we see in these words of St. Paul, and what is taught clearly in the Book of Acts, is the dependence of the Apostolic Church on the Holy Spirit, for grace and power, to be Alter Christus to the world, just as the apostolic ministry of men in Holy Orders is Alter Christus to the Body of Christ. When I say "the Apostolic Church," I do not mean to speak in any way whatsoever of an era, the times of the Apostles. No. We are the Apostolic Church, as we learn from the Creeds, and the witness of the Fathers. The same Holy Spirit that was poured out on the day of Pentecost remains with us- if we dare to believe it. And, the Holy Spirit, after two thousand years of granting charismatic (χάρις) power (δύναμις) to the Body of Christ has never grown old or weary. Christ is seated at the Father's right hand, and he is very active through us in the fallen world where the people of every nation need to hear that witness proclaimed that we have received from the witnesses of his resurrection.

The God of our Lord Jesus Christ, the Father of glory, give unto you the spirit of wisdom and revelation in the knowledge of him: The eyes of your understanding being enlightened; that ye may know what is the hope of his calling, and what the riches of the glory of his inheritance in the saints, And what is the exceeding greatness of his power to usward who believe, according to the working of his mighty power, Which he wrought in Christ, when he raised him from the dead, and set him at his own right hand in the heavenly places, Far above all principality, and power, and might, and dominion, and every name that is named, not only in this world, but also in that which is to come: And hath put all things under his feet, and gave him to be the head over all things to the church, Which is his body, the fullness of him that filleth all in all. Ephesians 1:17-23

And a happy Himmelfahrt to you all!

And when he had spoken these things, while they beheld, he was taken up; and a cloud received him out of their sight. And while they looked stedfastly toward heaven as he went up, behold, two men stood by them in white apparel; Which also said, Ye men of Galilee, why stand ye gazing up into heaven? this same Jesus, which is taken up from you into heaven, shall so come in like manner as ye have seen him go into heaven. Acts 1:8-11

My question, Fr Hart, is this: When Christ was "taken up and a cloud received him" was his body "assumed" or did he ascend of his own power?

I am unaware of any revelation in Scripture that answers that directly. But, it always says He ascended, which implies the latter.