Answering the crisis of authority

In Book III of his Laws, Richard Hooker argued for the high place that Christians must give to reason (or, as is sometimes said, right reason). In his arguments, he gave no room for the way in which modern revisionists attempt to distort his work. What emerges from an honest reading is that Reason itself is tied to sacred Tradition, or the Church with her authority. It is in keeping with fidelity to what has been received (again, following St. Vincent, "what has been believed always everywhere and by all.") that "we have the mind of Christ." (I Cor. 2:16) This is the answer to revisionists, and also to the so-called Reasserters who follow the idea that the only argument for the authority of scripture must come from the scripture itself.

Wayne Grudem (himself a Baptist, but the Anglican "Reasserters" clearly regard him as an authority) argued this idea in his Systematic Theology. He stated the position that only the scriptures have the authority to verify their own authority, an obviously circular argument that collapses in on itself; and it is something that the Fathers of the Church would have found, at best, quite unnecessary. After all, the Fathers of the Church were very much aware of having received authoritative tradition, a consistent teaching handed down from the Apostles, that other part of Apostolic Succession that must accompany the Laying on of hands. Allowing the authority of this Tradition to answer the demands of Reason secures the place both of Scripture and its proper interpretation by Apostolic teaching.

The tautology of Grudem's argument is dangerous, as is demonstrated in the same book. For he wrote that if we found a work that could be identified as a writing by one of the Apostles, we would have to regard it as scripture. This exists in a modern version of Protestantism, or neo-Evangelicalism, that often stresses that the scriptures are the Word of God as they were in the original autographa (original autographs). Of course, we have no access to any autographa of scripture, and therefore no settled authority, really, for anything- that is, if we buy that model of authority.

The authoritative Tradition of the Church answers the demands of Reason, and also gives us a fixed and authoritative Canon of Scripture that modern Evangelicalism, by its circular argument and concept of an ever elusive autographa, simply cannot have. And, this genuine crisis of authority exists in the "Reasserter" camp too. What they fail to see, also, is how well their position plays into the hands of the most heretical and apostate revisionists, aiding them in everything from women's "ordination" to the blessing of same sex unions. The authority of scripture, without the authority of the Church that has handed down a recognized body of teaching to guide our understanding of scripture, can be used by anybody to teach anything. They can argue endlessly, but never prevail over those who are "ever learning and never able to come to the knowledge of the truth." (II Tim. 3:7)

It has been pointed out that Richard Hooker, due to the era in which he lived, did sometimes use the word "tradition" in a negative way. Because he could, at times, use it in that way, it is all the more significant when he used it positively, in this case to speak of the authority of the Church not just in matters of polity, but of doctrine. So it is that he makes the case for the authority of the Church to teach that the Scriptures are the very words of God himself, and that they contain all things necessary for salvation.

XIII. Because we maintain that in Scripture we are taught all things necessary unto salvation; hereupon very childishly it is by some demanded, what Scripture can teach us the sacred authority of the Scripture, upon the knowledge whereof our whole faith and salvation dependeth? As though there were any kind of science in the world which leadeth men into knowledge without presupposing a number of things already known. No science doth make known the first principles whereon it buildeth, but they are always either taken as plain and manifest in themselves, or as proved and granted already, some former knowledge having made them evident. Scripture teacheth all supernatural revealed truth, without the knowledge whereof salvation cannot be attained. The main principle whereupon our belief of all things therein contained dependeth, is, that the Scriptures are the oracles of God himself. This in itself we cannot say is evident. For then all men that hear it would acknowledge it in heart, as they do when they hear that “every whole is more than any part of that whole,” because this in itself is evident. The other we know that all do not acknowledge when they hear it. There must be therefore some former knowledge presupposed which doth herein assure the hearts of all believers. Scripture teacheth us that saving truth which God hath discovered unto the world by revelation, and it presumeth us taught otherwise that itself is divine and sacred.

XIV. The question then being by what means we are taught this ; some answer that to learn it we have no other way than only tradition; as namely that so we believe because both we from our predecessors and they from theirs have so received. But is this enough? That which all men’s experience teacheth them may not in any wise be denied. And by experience we all know, that the first outward motive leading men so to esteem of the Scripture is the authority of God’s Church1 . For when we know the whole Church of God hath that opinion of the Scripture, we judge it even at the first an impudent thing for any man bred and brought up in the Church to be of a contrary mind without cause. Afterwards the more we bestow our labour in reading or hearing the mysteries thereof, the more we find that the thing itself doth answer our received opinion concerning it. So that the former inducement prevailing somewhat with us before, doth now much more prevail, when the very thing hath ministered farther reason. If infidels or atheists chance at any time to call it in question, this giveth us occasion to sift what reason there is, whereby the testimony of the Church concerning Scripture, and our own persuasion which Scripture itself hath confirmed, may be proved a truth infallible. In which case the ancient Fathers being often constrained to shew, what warrant they had so much to rely upon the Scriptures, endeavoured still to maintain the authority of the books of God by arguments such as unbelievers themselves must needs think reasonable, if they judged thereof as they should. Neither is it a thing impossible or greatly hard, even by such kind of proofs so to manifest and clear that point, that no man living shall be able to deny it, without denying some apparent principle such as all men acknowledge to be true. Wherefore if I believe the Gospel, yet is reason of singular use, for that it confirmeth me in this my belief the more: if I do not as yet believe, nevertheless to bring me to the number of believers except reason did somewhat help, and were an instrument which God doth use unto such purposes, what should it boot to dispute with infidels or godless persons for their conversion and persuasion in that point? 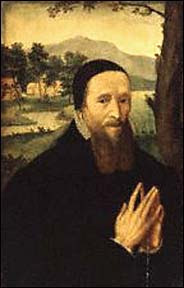 Grrrr. The software swallowed up a long and, I thought, rather good comment. Well, try again.

Thank you, Father Hart, for a wonderful exposition of an important matter.

Scripture is not alone, never has been alone, and was not intended to be alone. Sola Scriptura is a monstrous misstatement.

The Scriptures were never intended for individual use (though such use is often a good thing). Every book of the Bible was written to be proclaimed aloud and publicly in the assembly of God's people, where it can be interpreted and explained, and this remains its chief and most valid use.

It is Tradition, in the sense of the living teaching of a living church that identified the books of the Bible, distinguished them from mere good books, and recognized them as divinely inspired It is Tradition that preserved these books, using them in the worship of God, and wrestled an authoritative interpretation from their words. It is Tradition that identified in those words the cardinal doctrines of the Faith, rejecting those same damnable errors (and the many lesser errors) that keep emerging among some of those who proclaim sola scriptura.

There are no autographs, and may never have been. St. Paul did not write his letters, but dictated them, a practice probably common to others. Some may have dictated to several scribes simulraneously. Others may well have written more than one version of their books. Perhaps this could account for the variant endings to Mark. In all these scenarios, where is the one single autograph? And, even if such a thing were found, how would one know?

One final thought: if an interpreter "finds" an interpretation that is not already well-accepted in the Tradition, he is almost certainly quite wrong.

The first version was better, but, alas, lost.

The software ate your autographon, eh, Ed? It only aided in the proof of your point!

I just love it when someone asks 'where does it say in the Bible that women can't be priests (etc)'? I want to respond, rudely, with a question: 'Where does it say that they can?'

"My Bible says ..." is the frequent answer given by Evangelicals.

1. It's not MY Bible. It belongs to the Church.
2. It doesn't say what the Church doesn't say. If I think it does, I'm wrong. I misunderstood.

I'm passionate about this issue, having been a pastor in a supposed Bible only sect for 15 years. The only way to make that work was by instituting a supreme authority for interpreting the Bible. General Assembly in our case, as infallible as the Pope. Other groups have other ways of defining the "fundamentals" that they must believe, accepting by faith that the Bible supports them, even if Christians of all ages have said that it does not. If there is no authoritative interpretation, there is no stable doctrine, and every man can teach what he will. That is precisely the position held by the revisionists, and leads only to unbelief. There is no certainty in our use of the Bible without the principle in our masthead: "Quod ubi ..."

A well and beautifully written exposition of the faith. That it had to be written makes me sad as I wish more had read and understood the fathers before they decided they were owed ordination.