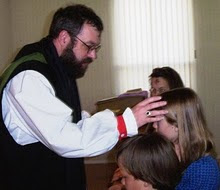 Having taken at least a couple of weeks to pray and consider, the Bishop of the Missionary Diocese of the West, United Episcopal Church North America (UECNA), has accepted our invitation to join us here at The Continuum. The Right Rev. Peter Robinson also serves as Rector of St. Paul's Anglican Church, Prescott, Arizona. Bishop Robinson has been writing very sound educational articles on his own blog for quite some time, The Old High Churchman. We trust he will bring that same wisdom to our pages.

You may read about Bishop Robinson by reading his blogger profile, and that may be done by clicking his picture on the right of this page. In addition, the website for St. Paul's says this:

After leaving High School, the future Bishop Robinson read history and theology at the College of Ripon and York St. John, North Yorkshire, graduating Bachelor of Arts (Honours) of the University of Leeds in June 1991. He grew up in a moderately High Church parish that had had a long succesion of "Prayer Book Catholic" vicars. After graduating from College, he served as a lay pastoral assistant in a liberal Evangelical Church of England parish in London, which he describes as being "an interesting experience, in that it taught me just how deep seated theological liberalism had become in the Church of England." He also discovered that his conservative views on the Authority of Scripture, the Creeds and the Liturgy - a discovery that led to barriers being erected by "the powers that be" in his home diocese to his being ordained there.

Following the vote to ordain women in the General Synod (11/11/1992), Peter left the Church of England worried by the exclusively "liberal catholic" outlook of the leadership of his home diocese, and skeptical of theological validity of the "two integrities" theory being propounded to keep Traditionalists in the Church of England...

Bishop Robinson first became interested in the United Episcopal Church in 2001 when leading his former parish in California. He rapidly concluded that the UECNA "was the old (Anglican or Episcopal) Church without the heresy" because of its retention of the 1928 Prayer Book and old Episcopal Church Constitution. However, in 2001 circumstances did not allow him to join the UECNA. Eventually, in 2007, both Fr. Peter and St Paul's Anglican Church were able to join the United Episcopal Church in North America. On 29th October 2008, the Rev. Peter Robinson was elected as a bishop-suffragan in the United Episcopal Church on 29th October 2008, and was consecrated 10th January 2009 by the Most Rev. Stephen Reber, Presiding Bishop of the UECNA, assisted by the Right Rev. D. Presley Hutchens of the ACC Diocese of New Orleans, and the Right Rev. William Wiygul of the APCK Diocese of the Southern States. The consecration was held at Trinity Lutheran Church, St Louis, MO.
Posted by Fr. Robert Hart at Tuesday, February 16, 2010

I am pleased that +Peter Robinson has
accepted the invitation to join The Continuum team.What an excellent lineup of contributors this site has!Congratulations to Fathers Hart,Kirby and Nalls for making such a wise choice and thank you Bishop Robinson for signing on.

Bishop Robinson will be a sound and solid addition to the AC team. I have followed his writings for years and respect his learning and his viewpoint immensely. This is great!
LKW

Wow, this is great. By some Providence I had actually JUST posted this post on "Prydain" about none other than Bishop Robinson. He will be a truly good fit for the work you are doing.

And to think that there are yet people who believe that God doesn't answer prayers. This was certainly an answer to mine. But considering my decided bias for the smarts of the team, it wasn't quite like attempting to draw for an inside straight.

A good day for everyone.

Now I have one less link to turn to in the morning read with coffee!

Not so! You will not have one less link. The Old High Churchman will, I am quite sure, remain.

I had JUST started reading your blog via this blog (really enjoyed it), but I've got a couple of questions --

Can in your opinion a united Continuing Church sustain both Anglo-Catholics as myself and Central Churchmen like yourself? Since neither of us is going away, how do you propose to practically effect a "broad" reading of the Affirmation?

I appreciate your thoughtful contributions.

Thank you Bp. Robinson for taking the time to extend your valuable teaching ministry to the larger Continuum!

Wow!!! I'm pretty speechless at this point. One of my favorite Bishops has come to the Continuum. I look forward to his wisdom, which I have found very helpful from his own blog, adding to the collected wisdom of those who post here.

It will certainly be good to see Bishop Robinson's comments on the Continuum. I have read his blog regularly in recent months and find that he provides a valuable voice in continuing Anglicanism.