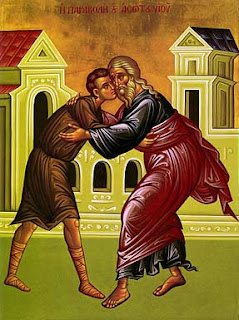 Reflections on the Prodigal Son (for Trinity IX)

2. Another character is the elder brother, the one who does not know that he too is a sinner. Neither does he care that his bitterness grieves his father, because, after all, he is right. Right, that is, in that he is correct. If ever we forget that everything we do in Church is all about the Father’s love for sinners (including ourselves), we become the elder brother. In every Holy Communion service we quote Saint Paul in the Comfortable Words: “Christ Jesus came into the world to save sinners.” The elder brother takes many forms, and that includes the forms he takes among Anglican Catholics like ourselves. I have been present in services where people were more concerned with a performance than with anything else; more concerned with observing all the little fussy details of the choreography found in Ritual Notes from the Alcuin Club, than with worshiping God in spirit and in truth. Infinitely more important than getting all the details right about when to step to the right or left, how any times to swing the thurible, or which candles to light first, is remembering why we are here to begin with.

Everything we hear from God’s Word, and every sacrament we receive, is all because Christ Jesus came into the world to save sinners. The elder brother is not capable of obeying the words of Saint Paul, “Do the work of an evangelist.” He cannot do this work, because he is so very correct about how unworthy the younger brother is; he would never have sought for his lost brother. And, because of this his heart is far from that of his father. He cannot make merry because joy depends upon love. And, to understand his father he would have to be filled with the love that forgives and restores.

3. Finally we must consider the prodigal son himself. Anyone who cannot identify with this repentant sinner (including his elder brother) wallows in self-deception because, as the Beloved Disciple wrote: “If we say that we have no sin, we deceive ourselves, and the truth is not in us. If we confess our sins, he is faithful and just to forgive us our sins, and to cleanse us from all unrighteousness. If we say that we have not sinned, we make him a liar, and his word is not in us (I John 1:8-10).” In order to learn about sin, I did not really need a textbook in Seminary. All I ever needed was to look in the mirror. Like Count Dracula, some people have no mirrors in their houses, and could not see their reflections even if they did. What is the mirror but the word of God, the perfect Law of liberty that James tells us we must look into? (James 1:22-25) The laver in which the priests cleansed themselves before entering the Holy Place was made of mirrors, all of which helped them to wash. Look into God’s word, and let the truth convict you of your own sins.

When I teach people about Confession and Absolution I tell them that they must remember that Christ is the Advocate for us; but we appear before a priest (and the Priest) to make confession as witnesses for the prosecution. Without excuses, without sugar-coating, we must testify against ourselves, and let the love of the Father come through to us by way of this sacrament of Christ’s own priesthood. We must learn to identify with the prodigal son, to be able to say, “I have sinned against heaven and before thee, and am no more worthy to be called thy son.” “'Bring forth the best robe, and put it on him; and put a ring on his hand, and shoes on his feet: and bring hither the fatted calf, and kill it; and let us eat, and be merry: for this my son was dead, and is alive again; he was lost, and is found.’ And they began to be merry.” In other words, spoken through the priest, “Our Lord Jesus Christ, who hath left power to his Church to absolve all sinners who truly repent and believe in Him, of His great mercy forgive thee thine offences: And by His authority committed to me, I absolve thee from all thy sins, In the name of the Father, and of the Son, and of the Holy Ghost. Amen." So too, with the General Confession for “all who truly turn to him.”

Saint Paul tells us that we are all called to become saints, both in the opening chapter of I Corinthians, and in the opening chapter of Romans. My Roman Catholic mother-in-law once, in 1984, gave me a dose of “nun theology.” Her bad understanding of her Catholic Faith became quite clear as I was told that we should never think that any of us could be like the saints: They are “special people who were able to be holy.” This makes them sound like superheroes, bitten by just the right spider so they can shoot webs out of themselves, or that they can fly because they come from Krypton. On the other hand, I have had Fundamentalist friends who preach that once you “come to Jesus” you are no longer a sinner, but rather you are already a saint. However, what Saint Paul told the Corinthians and the Romans was that they were called to become saints, because holiness of life is a vocation for every Christian.

But, unless we first identify with the prodigal son, we haven’t a snowflake’s chance in “the other place” of becoming saints. Knowing we are called to become saints, but seeing the terrible truth in the mirror of God’s word, we must be willing to appear for the prosecution in order to receive the grace of forgiveness. The joy of sin-forgiven creates charity; and this, in turn, fuels the ability to do the work of an evangelist.

The parable of the prodigal son convinced me to go with the Continuum rather than jettison Anglicanism altogether for Rome or Orthodoxy.

Indeed, the sin of the prodigal son was to squander his personal patrimony. Of course, an Englishman going to Rome or Orthodoxy would not constitute a complete squandering of his patrimony, as catholic Christianity is the greater part of it, it would still unnecessarily squander some very comforting and edifying portions thereof.

Hopefully, the Continuum can provide a real, true home for Anglicans who feel compelled to leave Canterbury and 815 due to recent negative developments.

Well, db, I can appreciate that as long as our Orthodox and Roman Catholic friends do not think we are calling their sacraments and theology "the husks which the swine did eat." For myself, I am sure that is not your meaning.

I hope db means that within Anglicanism it is still possible to preach the doctrines of sovereign and unconditional grace, which are less clear in Rome and Orthodoxy.
As your splendid sermon points out, this is the real issue of the parable.
LKW

An absolutely excellent sermon save for the little point about Ritual Notes being from the Alcuin Club. Nothing could be farther from the truth. The Alcuin Club once was about how to obey the rubrics of the 1662 edition of the Book of Common Prayer while Ritual Notes was intended to show one how to make the prayer book services compatible with the rubrics of the Tridentine missal. Ritual Notes was the work of folks whom one would never elsewise have heard of while some of the greatest Anglican names of the last century sat on the committee of the Alcuin Club, chief among them Charles Gore and Walter Howard Frere.
This is a small point and affects the argument of the sermon not at all, but those who follow Ritual Notes always seem ashamed of being openly Anglican and aped a Rome now almost completely vanished while those of us who followed the Alcuin Club publications to the point that they, too, fell to the modernists only wanted to be Anglicans and unashamed. We would still like to be that and believe it possible while the other seems more and more like King Ludwig's castles. We, in the words of db, do not intend "to squander . . . .(our) patrimony . . ." or any part of it which is why we are such fans of the Continuum and would like permission to link to it from our parish website as a prime example of the faith we teach and the theology which we believe.

The Alcuin Club did not create Ritual Notes, but we do have an old copy in our Library that they published. Thank you for the clarification, and for the kind words.