A fresh look at the Sermon on the Mount 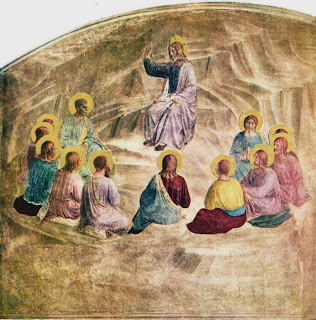 When it comes to the Sermon on the Mount, even readers of The Abolition of Man by C.S. Lewis seem blissfully unaware of his premise, that our Lord did not bring any new teaching on morality, or any novel approach to ethics. Furthermore, this seems even more true concerning the second half of that premise: that had the Lord introduced startling new concepts of morality never before known, we should suspect him of fraud and doubt his goodness. How then do we read the Sermon on the Mount, especially those parts in which we have heard from those of old time, and then we hear the words, “But I say unto you…” as if he was presenting an original thought with an air of authority? Lewis presented the anthropological and historical evidence that demonstrates universal knowledge of morality and ethics among all of the various ancient nations, even amidst their paganism. And, though the light in them was, by the Divine standard, darkness, it was light enough to make them aware of right and wrong (Romans 1: 19, 20). How much more was the understanding of a people true light indeed, as that light shone among the Jews, whose morality came from the Law revealed by God to his servant Moses.

We have been conditioned to think that, in the Sermon on the Mount, Jesus was presenting new insights into morality hitherto unknown by Israel. But, the Lord was teaching the true meaning of the Law, a revelation that had become ancient even by that time. All of his authoritative teaching about right and wrong, and the application of the commandments of God to the deepest and most hidden places of the heart, were clearly evident in the Old Testament scriptures. There was nothing new in his moral teaching.

What was new, however, was the teaching he presented in that sermon on the subject of himself. The startling new doctrine in the Sermon on the Mount was his claim to divinity, a unique relationship to the Father by which he claimed equality with God; the claim that another Gospel, According to John, declares to be the direct cause of his trial and death.

But, in his rabbinical teaching on morality, he commented on the Torah. Compare his words, from these examples, with what we find in the Old Testament.

“He that revengeth shall find vengeance from the Lord, and he will surely keep his sins [in remembrance.] Forgive thy neighbour the hurt that he hath done unto thee, so shall thy sins also be forgiven when thou prayest. One man beareth hatred against another, and doth he seek pardon from the Lord? He sheweth no mercy to a man, which is like himself: and doth he ask forgiveness of his own sins? If he that is but flesh nourish hatred, who will intreat for pardon of his sins? Remember thy end, and let enmity cease; [remember] corruption and death, and abide in the commandments. Remember the commandments, and bear no malice to thy neighbour: [remember] the covenant of the Highest, and wink at ignorance.”
Ecclesiasticus (or Sirach) 28:1-7

“Ye have heard that it was said by them of old time, Thou shalt not commit adultery:
But I say unto you, That whosoever looketh on a woman to lust after her hath committed adultery with her already in his heart.”
Matthew. 5: 27, 28

“I made a covenant with mine eyes; why then should I think upon a maid?”
Job 31:1

(Indeed, the understanding of ancient Jews was that such lust and covetousness directed at an unmarried woman was to covet one destined to become another man’s wife.)

In these teachings the Lord was clarifying the meaning of the Law that must be engraved by the Holy Spirit on the human heart as one of the benefits of the New Covenant (Jer. 31: 31-34). The words of David ring loud: “Behold, thou desirest truth in the inward parts: and in the hidden part thou shalt make me to know wisdom… Create in me a clean heart, O God; and renew a right spirit within me.” (Psalm 51: 6, 10) By making this teaching plain and clear on the mountain, he demonstrated that he was the Prophet like unto Moses that would speak with unique authority (Deut. 18: 15), and that the New Covenant would be established through him.

In the Sermon on the Mount, the new and startling doctrine was his own claim to divinity. He does not say “thus saith the Lord,” but rather, “I say unto you.” After this, he goes as far as to begin his teachings with the familiar phrase- familiar to us since he used it so often- “Amen, amen, I say unto you…” No prophet dared to speak this way. And no prophet ever spoke of himself as the One who will exercise the powers of God on the day of judgment. But, our Lord speaks of himself as the One who will judge all men on the last day, as a Man who has the authority of Almighty God:

"Not every one that saith unto me, Lord, Lord, shall enter into the kingdom of heaven; but he that doeth the will of my Father which is in heaven. Many will say to me in that day, Lord, Lord, have we not prophesied in thy name? and in thy name have cast out devils? and in thy name done many wonderful works? And then will I profess unto them, I never knew you: depart from me, ye that work iniquity.”
Matthew. 7: 21-23

For this we have no Old Testament parallel, nothing at all to which we can make a comparison. Never a man spoke like this man.

Indeed, new and shocking teaching clearly is found in the Sermon on the Mount; but let’s get it right. This is where we find it: In the Lord's words about himself. The cryptic anti-Semitism that fancies the notion of Jewish ignorance about right and wrong, that subtle thing that colors too much of our thinking, needs to be exorcised from the Christian’s mind forever. What the Lord said that day was new and shocking (just as it was new and shocking on another day when he told them that they must eat of his flesh and drink of his blood to have eternal life). But, it was not his moral teaching that was new and shocking, for the people had been instructed in the Law and the Prophets from childhood. What was new and shocking was his claim to equality with God, this claim from a Man who sat teaching that day on the mount, “pleased as man with man to dwell, Jesus our Emmanuel.”

Oh, goody! More ammo! This time, to use against the anti-Christians who admire our Lord's teachings (i.e., His moral teachings), which they have probably never closely read. And against another group: the perpetrators of the Nice Heresy, which is the teaching that Jesus was Nice, and we should be, too (which includes letting women be priests if they really want to, and not expressing doctrinal views too firmly, or at all).

I think we're all on the one page in recognising that the measure of Jesus isn't what He taught (good as that is) but what He was (and is), and what He did.

Thank you, Fr. Hart, for this excellent post. As well as clearing up some common misconceptions (which I so easily fall back into), observations such as yours help to revivify ancient Christological "formulations"; in the sense that I am once again dumbfounded by the claims of Jesus.