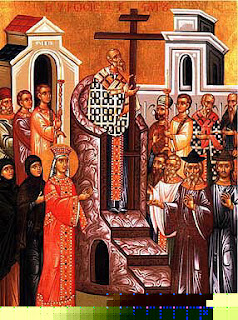 We could not speak of the exaltation of the Holy Cross unless we believed in what happened on the third day. Without the resurrection, the cross is only a symbol of cruelty and death. With the resurrection of our Lord and Savior Jesus Christ the cruelty is overshadowed by love, and death is swallowed up in life. So we think of that brief line from the Epistle to the Hebrews: “Looking unto Jesus the author and finisher of our faith; who for the joy that was set before him endured the cross, despising the shame, and is set down at the right hand of the throne of God.” -Heb. 12:2

What was that joy that our Lord looked to? For Himself there was no gain; the Epistle reading from Philippians begins by proclaiming that first important truth of Christology, that He was equal with God. As we read on we come to that misunderstood Greek phrase that has been a source of confusion in modern times, the phrase that translates literally as “he emptied himself.” So it is that some think that he left his divine nature behind, and fit his being into a human frame. However, the phrase “made himself of no reputation,” with that word keno-o (a form of kenos), taken in the context of the very sentence itself, means the same thing as that later phrase translated, “he humbled himself.” He humbled himself by taking human nature into his divine being, limited nature into his infinite person, time into his eternity, and death into his creative life. So, as Saint Peter tells us, it was not possible for death to hold him (Acts 2:24). But, he did submit himself to execution at the hands of his own creatures; and, speaking of his readiness to do always the will of the Father, St. Paul writes:, “he became obedient unto death even the death of the cross.” What was the joy that was set before him?

His joy is the redemption of fallen mankind, the joy of love. Saint Anselm, one time Archbishop of Canterbury, tells us that the rewards due the Son for his obedience unto death, even the death of the cross, have been graciously earned for us, and that to us our Lord Jesus gives all of the benefits of his passion and death, having need himself of nothing.1 By means of his cross and death our Lord Jesus has forever pronounced the judgment that fell on the prince of this world, and has cast him out. The Lord, by his death, has destroyed the works of the Devil; he has conquered Satan, sin and death once for all. He has, as the Lamb of God, taken away the sins of the world. By his rising to life again he has destroyed death itself, spoiling it of power, robbing it of its bitter sting, trampling it under foot. He allowed his heel to be thus bruised that the head of the serpent would be wounded- mortally wounded with the final blow. And now what is his joy by which he endured the cross? It is the joy of love, that having made us clean from sin and free from death, he is not ashamed to call us brethren (Heb. 2:11).

To follow him, we too must take up the cross every day. We have to embrace the ascetic disciplines necessary to our own salvation, by which we say no to sin because we say yes to God. And, how shall we endure the cross, if not also by the joy that is set before us? Our joy is described by Saint John:

“Behold, what manner of love the Father hath bestowed upon us, that we should be called the sons of God: therefore the world knoweth us not, because it knew him not. Beloved, now are we the sons of God, and it doth not yet appear what we shall be: but we know that, when he shall appear, we shall be like him; for we shall see him as he is. And every man that hath this hope in him purifieth himself, even as he is pure.” – I John 3:1-3

Hope gives us this joy, and without this hope we would not work to purify ourselves, to be pure as he is pure, to be holy because the Lord our God is holy (Lev. 20:7).

Around a century ago it became trendy to give uncritical acceptance to Higher Criticism, a school of thought that subjects the scriptures to tests of authenticity based on mere whims, fancies and theories that have no basis in scientific and historical fact, no documentation and no intellectual merit. At first the theses of this school were put forth as theory, and then once they were quoted often enough, they were treated as substantiated fact, the “critical” method purported to be in use never turned on itself as honesty demands.2 Among the changes that took place in mainstream Protestant denominations, especially in their seminaries, was a new look at Easter, based on the assumption that Jesus must be dead, since dead men stay dead. As a result, many theories were put forth to explain away the post resurrection appearances of the Lord to eyewitnesses. What all of these theories have in common, other than the presumption that rationalism is objectively true, and that everything must have a scientific explanation (except, apparently, the mind itself that comprehends science), is that everyone of them takes more faith than belief in Christ’s bodily resurrection. The theories are good for a laugh, but not for much else.

However, for some their faith was overthrown. Once the joy of Easter was removed, and with it the hope of all believers, who could endure the cross? If we want to know why mainstream denominations, including the Episcopal Church, have embraced and excused sinful practices as "alternative lifestyles," and have lost the will and authority to preach that men should repent, as indeed God commands all men everywhere to do (Acts 17:30), this is the reason. They did not begin by embracing sin, but by losing their hope. They lost the expectation and anticipation of sharing in Christ’s resurrection and immortality. Without joy set before them, how can they endure the cross? They were enemies of the cross of Christ (Phil. 3:18) only after losing the joy of believing; for if the tomb cannot be opened, how can anyone endure the cross? Without the exaltation of the Holy Cross by the resurrection of Christ from the dead, who can endure the cross of death? They are left with “eat, drink and be merry, for tomorrow we die.”

This day is the feast of the Exaltation of the Holy Cross, because we believe that our Lord, having been obedient unto death, even the death of the cross, is himself now highly exalted by the Father, and has, among the creatures he without shame calls his brethren, a name above every name, that at the name of Jesus every knee shall bow and every tongue confess that Jesus Christ is Lord. His cross is exalted because in his resurrection he overcame death itself, and so it is we know that by his cross he has freed us from our sins. Because we know he is alive, and that when he comes we shall see him as he is and be transformed into that perfect image, made like unto Christ the Son and perfect icon of God the Father, by the power of the Holy Spirit who raised him in holiness, we too can endure the cross for the joy set before us. Our joy is that we are raised with him and seated in heavenly places, and “our light affliction, which is but for a moment, worketh for us a far more exceeding and eternal weight of glory (II Cor. 4:17).”

1. St. Anselm, Cur Deus Homo
2. For a good examination of the historical process of how this school gained wide acceptance see Historical Criticism of the Bible, by Eta Linnemann, translated by Robert Yarbrough, 1990, Grand Rapids.
Posted by Fr. Robert Hart at Thursday, September 13, 2007

Great reminder of the blessing of the cross.