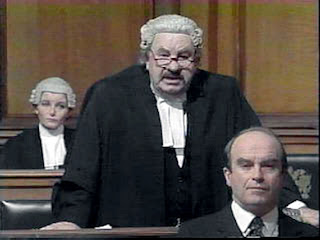 
Overweight middle aged men, especially those of us with bad habits like smoking cigars and drinking things stronger than water, need our heroes too, perhaps even role models. Might it be just a bit strange, one might ask, for a member of the clergy to find himself drawn to a character who expresses no religious convictions, other than the presumption of innocence in English Common Law, and reverence for small cigars and affordable wine? His father was a Church of England Vicar who decided, after several years of ministry, that he no longer believed any of the 39 Articles, and hated Bible studies. And, the creator of the character, John Mortimer, is himself a lawyer who, long ago, defended the rights of pornographers to be published in England. He defended Lady Chaterley’s Lover, though, to his credit, he never defended it as literature.

But, I just cannot help it. Rumpole is the hero for me, a man I want to be like when my old age comes (which is any day now). Let some emulate the eternal thirty-something youth of James Bond, the physical strength of Schwarzenegger characters (none of whom I could name), or the gun-slinging fast draws of the old West. I want to be like Rumpole. First of all, from the physical perspective, it is easy. But here is where I surprise you: from a moral perspective it contains a challenge, and a challenge not unworthy of a Christian, not even of a clergyman like me.

You see, old rotund, Wordsworth spouting Horace Rumpole of the Bailey, is written, and for several years was played on Television by the great Leo McKern, with subtle but very observable strength of character, true courage and compassion. Not that he would want it to get around. Take his marriage for example; despite all the humor about “She who must be obeyed,” Horace is actually a very good and faithful husband, and was a responsible and loving father to their only son the whole time that he grew up. In the stories, these facts (of fiction) are made absolutely clear.

But, it is in the legal profession, and his genuinely heroic way of defending his clients, that Rumpole sets a good example for us, and in a special sort of way, even for clergymen. For, if we clergymen took the highest ideals of our Profession as seriously and as passionately as Rumpole takes his profession, the world might be evangelized in a decade. Take one of the earliest stories in the whole Rumpole canon, Rumpole and the Learned Friends.

Rumpole is defending a man known to have a criminal record, accused of safe blowing at a post office. Right away the streetwise barrister suspects that the evidence against his client was forged by a corrupt police inspector, known in the underworld as “Dirty” Dickerson. The judge, as Rumpole knows, will take a very dim view of any attack made on the reputation of a policeman, especially on behalf of a known criminal. Nonetheless, Rumpole, having obtained his client’s instructions to do so, makes his attack in court. But, something unusual happens; in this case Rumpole loses; at least at first.

When the judge begins to indicate that he is about to hand out a very stiff sentence because of the attack, the client cries out in the courtroom, lying about his own advocate: “I never wanted my barrister to ask them questions! I told him to keep quiet!” At this point it is our hero that faces danger, the likelihood of a suspension from the Bar, which would mean professional ruin.

His wife and his friends all want to help, and the best way to help is simply to advise old Rumpole to admit his mistake to the tribunal, and apologize to the inspector. So, he finds himself conversing with his friend and fellow barrister, George Frobisher, at which time Rumpole admits that it is quite probable that his client really was guilty. Both George and Hilda Rumpole assume that this means that justice was done. Not so our hero.

“We can’t decide guilt or innocence. That’s not for us, you know that George. That’s for twelve puzzled old darlings pulled off the street for three boring days with a safe blower. But we can make sure they’re not lied to, not deceived, not tricked by some smiling copper who wants to take away their decision from them by a few conjuring tricks in a dark cell.”

To defend this principle, the rotund barrister is willing to go down in flames. The ends do not justify the means, at least not in his corner of the world, the Old Bailey, where the rule of Law demands the Presumption of Innocence, and places the burden of proof on the prosecution. How often the public interest appears to be served by taking an easy course, one that is favored by a majority, and where it’s not really all that bad to fudge the rules a bit, as long as all ends well. Why not apologize and let the dirty copper win his battle, since he got a bad guy, and that’s good? But Rumpole, our hero, stands on principle.

Fortunately, he is no idiot, and he manages with some good and sneaky help to prove the guilt of the police inspector, and thus spring his client, and remove all danger of suspension, as well as all stain of character, from himself. But, he was ready to lose all for the sake of principle. If his profession cannot be what it ought to be, he will go into the country and grow vegetables for a meager living. Oh, what we clergy could learn from this.

Rumpole never prosecutes, and he never wants to be a judge; “there but for the grace of God…” he quotes to himself in one story. Even outside of court, when his fellow barristers, or the helplessly self-destructive judge Guthrie Featherstone, mange through sheer stupidity to entangle themselves in all sorts of trouble, the heroic defender works behind the scenes, usually anonymously, to spring them from the snares of their own making. They never appreciate his kindness; indeed, they never know how much his compassion got the better of him so that he came to their aid in time of need (though his left hand never knew…).

Yes, there is a lot we can learn from the old barrister. And, I often want to write and ask Mr. Mortimer if his character did not pick up something more than we read about from the Faith of his priestly father, even though the old man suffered his own doubt and disappointment. After all, we could all turn out a lot worse than Rumpole of the Bailey.
Posted by Fr. Robert Hart at Thursday, August 30, 2007

"If his profession cannot be what it ought to be, he will go into the country and grow vegetables for a meager living. Oh, what we clergy could learn from this."

Where does this fit with the indelibility of Holy Orders?

Fr. Hart,
I always wondered why I was so attracted to that series. Very insightful of you and I thank you for it!
Fr, Joseph DeHart, ACC priest

It fits quite nicely.

A priest is a priest and there is indeed nothing to be done to change that.

When, however, is a priest entitled to practice his ministry? In Catholic ecclesiology, that is only with the permission of his bishop. Lacking such permission he has no proper authority to do so, and, in such a case, would do better to pray quietly by himself while growing vegetables.

Another question: Which is the higher obligation of a Christian priest? To exercise the prerogatives of office, or to practice Christian charity? If a man's continuance in the active priestly office will, for whatever reason, work to the hurt of souls, then it becomes his duty, for the very sake of his office, to withdraw and go plant vegetables.

I've not yet read Rumpole, but now have him on my list. He seems to be an illustration of this principle.

Thank you, Fr. Hart, for a beautifully written and superbly thought-out essay on one of my favorite characters as well. Perhaps you could one day write something on The Simpsons--or maybe you already have?

Sandra McColl wrote:
Where does this fit with the indelibility of Holy Orders?

This was written for an ecumenical readership some time ago, many of whom have no such understanding. Still, it works for us, because we need the attitude of all or nothing- either we serve Christ in our priestly vocation or we find another way to serve Him. But, we do not compromise.

Isn't that why many left the corrupted Anglican churches in the first place? In the U.S. that meant, for some, sacrifices of some or all of their pension, a harder life, lack of benefits and less income, etc. In place of well paying highly visible parishes, some went out and grew vegetables, or made tents, while starting up a proper Anglican mission.

Ed: His obligation is therefore to find a bishop under whom he can function. The prerogatives of office are a duty as much as they are a privilege.

Fr Hart: Exactly: 'while starting up a proper Anglican mission'. Very good piece, though, and I always enjoyed Rumpole.

If you're serious about writing to John Mortimer then you should do so without delay. Its my understanding that he is very much the invalid, and approaching the end of his life..

The seeking of a bishop under whom he can function is a possibility today only because of the scandal of division. If there were, as there should be, one bishop for one place, it would then be a prayerful choice whether to exercize one's primary vocation as a Christian in the place to which one has been called (even if as a layman), or to follow a call to another place. Threre are no priestly prerogatives that are independent of the workings of the church. Under existing circumstances I will not judge the priest who seeks another bishop, but neither will I judge the priest who feels his calling is to submit and live out his ministry as if a layman.

In my own case (not the same as I have not received orders), I am convinced that I have an authentic vocation (accompanied by 25 years of service as a Protestant minister), and that I should have been ordained. I am also quite certain that, if I shopped for an amenable bishop, I could becoime ordained. However, I am where I aqm called to be, in the jurisdicition where God has placed me, and have found that here it won't happen. So be it.

For me it would be wrong to seek this kind of remedy.