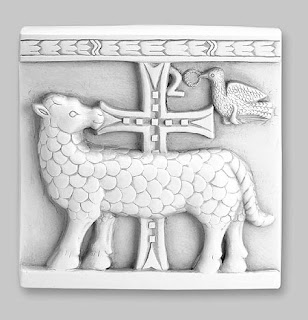 Glory be to Jesus
Who in bitter pains
Poured for me the life-blood
From His sacred veins.


The hymns of the Church have always been quite rich with references to the blood of Jesus Christ as the cleansing fountain, freeing us from sin and death. The hymns are often Eucharistic, and often they are simple bare statements of gratitude for His atoning death and sacrifice such as the verse I have quoted. If we are to understand our salvation and appreciate it as the Bible reveals it, we must return to this tradition; we must speak often with reverence and gratitude for the shed blood of our Savior. We must speak often of the Lamb of God who takes away the sin of the world.

The Old Testament is rich with many pictures of the blood of Jesus Christ. We recall the sacrifice that Noah offered after leaving the Ark, and that only after he offered it did the Lord promise never again to destroy mankind by the waters of a flood. We see Abraham offering sacrifices on that night when God appeared to him, walking between the sacrifices and promising him that his seed would be the salvation and blessing for all of fallen mankind in every nation. In the days of Moses we see the Passover, and the many laws of atoning sacrifice to be carried out by the priests in the temple.

Let’s look at the Passover. Remember what God told Moses, that the destroyer would pass through Egypt taking the lives of all the firstborn. The people of Israel were told to slay a lamb and put the blood on the doorposts of every home of the Hebrews. God said “When I see the blood I will pass over you, and the plague shall not be upon you to destroy you, when I smite the land of Egypt.” (Ex. 12;13) “When I see the blood…” There was no other protection. When John the Baptist said, “Behold the Lamb of God, which taketh away the sin of the world” (John 1:29) he made direct reference to the Passover, and spoke then of the coming death of our Lord. Then, when we read the Law that God gave to Moses, we see that the priests made atonement for repentant sinners by the shedding of blood, by slaying the sacrifice.

The blood of sacrifice is spoken of in two ways when we see the pictures, the shadows and types in the Old Testament that prepare us to know Jesus Christ: As the Epistle from Hebrews for today tells us, and as I have already reminded you when speaking about Abraham, the shed blood of sacrifice is necessary to establish a covenant. And, when the priests of the temple would perform their sacred ministry, the blood of sacrifice was necessary for the forgiveness of sin. And, as you shall see, what this means for you, is that the salvation of your soul has been provided by God’s certain covenantal promise, and by Christ’s offering up of himself, as the same epistle to the Hebrews puts it, “once for all.”

Of certain facts you can be sure. One obvious fact is that you are a sinner, as am I. For this reason alone, the subject of today’s feast is relevant to you, and it addresses your deepest need. Such talk may make you squeamish, and it really is not a “nice” thing to talk about in church. But, what you may have noticed is that nothing in our whole liturgy is nice; It is beautiful, powerful and spiritual. But, it cannot be nice because it speaks directly to the most important need that you have. The entire celebration of this Holy Communion tells the story of your salvation and mine. Even if this sermon were to fall flat, and I were to fail in all my efforts to communicate, the words of this service, all true and directly Biblical, tell the story- the whole story. In this service you hear of the great drama of our fall into sin and death, the danger and despair brought on by sin, and the need of our soul to be reconciled to God. Then it tells the Good News of His initiative in sending His only begotten Son into the world to save sinners, such as you and me.
The shed blood speaks of His covenant. In the sixth chapter of John’s Gospel, when Jesus tells us that His flesh is food indeed, and His blood is drink indeed, he gives the promise of salvation not just to the crowd, the whole number of His true followers; He gives that promise to the individual: He gives it to you. This is why we should resist every effort to retranslate the words from “I will raise him up on the last day” into “I will them up on the last day.” “Them?” How many of them? All or a few? No. The promise is made to each individual when read as Jesus spoke it. It is made to you.

God never breaks His covenant, but keeps it to a thousand generations; that is he keeps it forever. This covenant that promises you the forgiveness of sins and the inheritance of eternal life is no mere sentimental capricious whim of God, deciding in a moment of favorable emotion to forgive your sins and let you live forever. It is the covenant promise established in the blood of His Son. In fact, you and I had no input into this divine plan. We did not decide on a way for God to show us mercy; it was the Father’s initiative to have mercy on us in such a way that His holiness was not compromised. Furthermore, the promise by which you are given a sure and certain hope was not made primarily to us, but was made first of all by the Father to the Son; that is, by a promise within the Trinity of the eternal Godhead, carried out by the Word made flesh who offered Himself without spot to God.

This Atonement was made for you by the true High Priest. Once a year the High priest, on Yom Kippur- the Day of Atonement, carried the blood of the sin offering into the Holy of Holies, in the temple, and sprinkled it on the mercy seat atop the Ark of the Covenant, a picture of the very throne room of God. So, Christ offered Himself once, and when he was risen from the dead and ascended on high into the very throne room of His Father, before sitting at the right hand of the majesty on high, he presented His own blood as the spotless, sinless sacrifice. God said to Moses, “For the life of the flesh is in the blood: and I have given it to you upon the altar to make an atonement for your souls: for it is the blood that maketh an atonement for the soul.” (Lev. 17:11)

When I read this in Hebrew, I saw that it could be translated “the soul of the flesh is in the blood.” This adds to the power of the words that follow: “and I have given it to you upon the altar to make an atonement for your souls: for it is the blood that maketh an atonement for the soul.” Think then on those words from Isaiah about the Suffering Servant: “He hath poured out his soul unto death: and he was numbered with the transgressors; and he bare the sin of many, and made intercession for the transgressors.” (Isa. 53:12)

I want you to know that it is always wrong for a Christian to speak of an act of reparation, that is an act of repentance that makes up in some way for a wrong, as “an atonement.” Such reparation is often a necessary part of repentance, but it is not an atonement. Atonement speaks of your need to be reconciled to God, and it carries with it the reality that all sins are of infinite consequence because God, the One always wronged by sin, is infinite. All sin is of eternal consequence, because God is eternal. Therefore, we have only one Atonement. Even the sacrifices of the Old Testament were not real atonements, as they had no meaning until the day Christ died and made all of them into part of that reality. Your need to be reconciled to God is of infinite and eternal consequence for you; and God has provided the means to forgive you and welcome you into His eternal fellowship by the bloody death of His only begotten Son. That is the one and only Atonement.

The Old Testament altars looked ahead to Christ’s coming sacrifice, and that is why blood was shed on them. Our altar looks back at an accomplished fact: “It is finished.” Our sacrifice involves no killing and no shedding of blood, and so it testifies loudly for all to hear that Christ was once offered to take away the sins of the world. There is just one sacrifice, and only one Mass, even as often the Church enters into it. Our service is not nice; it is powerful, lofty and spiritual because we are here joined to the true sacrifice itself, and taken to the foot of the cross. Look up at the bleeding sacrifice as you pray with us this day, and see what “sorrow and love flow mingled down,” look into His eyes, covered with the blood from the crown of thorns, as He pours for you the life-blood from His sacred veins.

And, joining Eucharistic devotion with simple bare gratitude, once you have made your confession of sin and been cleansed in your conscience by the great gift of absolution made possible by His precious death and sacrifice, come near and receive this sacrament to your comfort. The best way to express your thanksgiving to God is to say with the Psalmist: “I will receive the cup of salvation, and call upon the name of the Lord.” (Psalm 116: 12)