An Old Bishop for a New Year 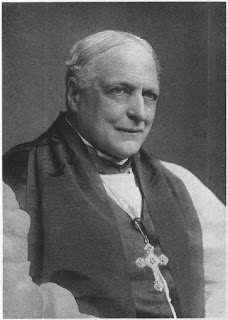 "Press on the Kingdom!"

-Customary Farewell to Clergy of the Rt. Rev. C.C. Grafton

At the beginning of a New Year, it is good to reflect on the past. In particular, it is an occasion to be quiet, to reflect on the joys and sorrows of the year last past, and to contemplate what the future might hold. As an aid to such meditation, a little lectio divina is most appropriate. And so it is this New Year's Day 2010 I found myself as I frequently do-visiting the collected works of that great Anglo-Catholic Bishop Charles Grafton. He is our part of the great Anglican patrimony that is more than a song, or a style, or the speech of a bygone era. This is a small part of our substantive inheritance, a distinctive of centuries of divine thought.

Bishop Grafton’s writings, like those of so many Anglican theologians and divines, prove prescient at any number of levels. Whether the question is formation of clergy, development of religious orders, practical running of a diocese, or large theological questions, the good bishop’s words echo across the years and exhort with all charity. In my meanderings, I found a letter from January of 1906 especially germane to what the Church is likely face in the coming year.

Now, as then, there never was a greater need for united prayer among Catholics, especially Anglo-Catholics. The “mainstream” church has been secularized and not only is dividing, but also the branches of the Christian church are being opposed to each other, and those who would live the faith Catholic within Anglicanism are accosted by those who would trade it all for perceived "unity", or "safety" or "completeness". Fair warning, though. Even within that large body called the Roman Catholic Church there are numerous splits and factions, whole-scale disobedience over dogma, and the spirit of the age-the zeitgeist-abounds. You will face the very same issues you seek to escape, yet a hundred-fold and a man-made document will afford poor shelter no matter how solemn its claimed status.

It seems as if we are reverting to the times before Constantine and persecution. This state everywhere is fighting the church of Christ. Throughout the world, she is driven from the public square, her priests and followers mocked, hounded and killed at a brisk pace.

As Bishop Grafton noted, the world-spirit disbelieves in and hates catholicity. It is full of cynical unbelief in a creed. Satan has raised up a number of false religions, especially in our country and seeks to help them with supernatural gifts. For Grafton the problem was Mormonism, spiritualism, Taoism, and Christian Science. Some of these remain although packaged in new wrapping and type with more colorful ribbons. We face a world immersed in spiritualism, neo-paganism, earth worship, witchcraft, and other movements that have risen to be called “religions”.

As well, there is an un-Catholic and human spirit of philanthropy in subtle, and not so subtle, forms of socialism and other so-called “progressivism.” All of which is not based on Christ, but on notions of human-driven progress and anthrocentrism. Leaders appear as great man and great women-seemingly good, temperate, purer than the light, full of schemes for the people of advancement.

But, as Bishop Grafton warned, “they are false and counterfeit Christs.” They are signs of the latter age. Indeed, we are living in a time and a country wherein “Satan and his fallen angels are having tremendous power.” It appears to be their time-Bishop Grafton called it “the age of Satan.” He viewed America or the United States as the field of the great final conflict. If the sheer push of secularism, materialism and drift toward the lowest possible moral standards and unbridled sexuality are a measure, this surely is the case.

But the message now and for all time is that the Church cannot be crushed out of existence. The “Two Witnesses" of the Word and Sacraments will rise and stand on their feet. They are doing so even now in tens of thousands of places. Charles Grafton predicted that hidden or at least semi-hidden from the world, there will be a great spiritual movement, and souls will be drawn to Christ, and their spiritual states will be made, and, then, Christ will come. It is the kingdom of this world that will suffer complete destruction, and the wickedness of man will cease. It may well be that Continuing Anglicanism may provide a crucible in which such a movement can form-small, ignored, semi-cloaked, a mustard seed.

But all things are in turmoil, and the church at all levels and in all of her branches needs to be aroused. The prayers of the faithful can save it, and every prayer, no matter how small, helps on this grand consummation. And, for those in that part of the Church Catholic called “Continuing,” Bishop Grafton offers this thought to carry us through this next year and in the years to come:

We have our own imperfections, and are embarrassed by our temporary trials. But our church is being benefited thereby and straightened and becoming more consolidated. The fate of her children rises triumphantly in the midst of her trials. Her candle stand stands securely fixed. The storm may arise and the wave lash against the ship, but she rides in safety, because Christ is in her, the source of her invincible strength. It is only by increasing prayer to him that we evoke his saving power. Go read forth therefore, bravely, courageously, truthfully, knowing that Heaven is before us and Christ is at our side.

Excellent! Not only is the Continuum worth reading for its encouragement to carry on, and as a source for education (even the disagreements in comments are of immense value for learning), but it contains really good writing.

Grafton is my kind of guy!

My other favorite American bishop of old is John Henry Hobart, whose writings about the Catholicity of Anglicanism are still valuable 200 years later.

Deacon Down Under said...

Bishop Grafton is perhaps the most inspiring Anglican Bishop of the 19th and 20th century - apart from Bishop Chambers That some traditional Anglicans would reject his orders with theirs to join the Latin Church distresses me deeply.

Love the quote at the end.

What say we go to Fond Du Lac and take Blessed Bishop's sarcophagus from the heretics! A good ecumenical endeavor for the Continuing Church to engage together!

Of course since I am offering the idea we get to have him first!