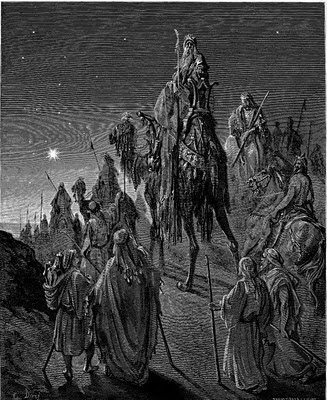 Because we celebrate the Birth of our Saviour on Dec. 25 and His Manifestation (that's what the word epiphany means) on Jan. 6, we might be tempted to think that His birth and His self-disclosure were two different events. His birth, in fact, was the beginning of Jesus' self-revelation as God in the flesh. The Epistle we read on Christmas Eve makes this clear, with Paul's ringing words, “the grace of God which bringeth salvation hath appeared to all men.” That verb “appeared” in the Greek is precisely the word from which “Epiphany” is derived.
It is fascinating to observe how the vocabulary of Holy Mother Church is borrowed, and promptly corrupted, into the secular language. All sorts of people nowadays who know nothing and care less about our holy days are nattering mindlessly about epiphanies. As non-Christians throw around a trendy word, it seems to mean a flash of insight or a surprising new idea. It originates purely and strictly in the human consciousness.
But as the Bible uses the word “appeared” or “epiphany,” it is a far greater thing. When the Wise Men saw the star, they discerned a new flash of light from the skies, as far away from them as it was unexpected by them. When the shepherds were startled by the glory of the Lord shining round about them, they did not congratulate themselves for having a new idea. When Isaiah wrote “the people who walked in darkness have seen a great light,” he did not mean that they remembered to bring their flash lights.
When God became man, and appeared at Bethlehem, to be wrapped in swaddling clothes and laid in a manger, something totally new occurred, something which had never been anticipated or precisely foreseen. For all the prophecies of Jesus which fill the pages of the Old Testament, never had it been revealed that the eternal Word would become flesh. That was not a human idea at all; such a thing had not even been revealed in advance. An enfleshment of the incorporeal God (“without body, parts or passions”) was unthinkable, to devout Jews, to sophisticated Greeks, to cultivated Romans alike.
The Incarnation, also known as the Epiphany of God in Jesus Christ, puts the whole human race into the predicament of Job, who was finally compelled to say, “I had heard of thee by the hearing of the ear, but now my eye sees thee.” Job did not claim to have suddenly stumbled on a new idea; he has seen God Himself! When we see in the mysteries of Christmas and Epiphany God Himself made flesh, we are reminded that Lent is not far off. So with Job let us say, “Therefore I despise myself and repent in dust and ashes.” As He was wrapped in swaddling clothes and laid in a manger, the Gospel story quickly tells us how He was wrapped in a shroud and laid in a tomb. That also is an epiphany we would never have arrived at on our own. LKW
Posted by Fr. Robert Hart at Monday, January 04, 2010

That also is an epiphany we would never have arrived at on our own. LKW

That is what amazes me about the so-called "great thinkers" in the Episcopal Church, such as Spong or some of those other johnnies. It seems that they cannot handle the way God does things, so they have to substitute one of their own, tired, mundane ideas that just about any bright 5 year old could think of.

And yet they try to make the claim that their shopworn ideas are fresh and new!

Reminds me of Jack Horner pulling out a plum and then remarking on how good he is!

They need to read John's prologue to his gospel and then re-read until they understand it. This is no plausible, human-created deity acting; this is the Creator of the Universe in action, doing a thing which no one would have conceived of!

The Lord has manifested forth his glory; O come let us adore him!