The Gospel for today sometimes makes me think of Gary Cooper as Sgt. York, sitting on the mountainside with his Bible, looking for answers. The words “Render unto Caesar the things that are Caesar’s, and unto God the things that are God’s” solved, for him, the question of conscience about taking up arms for his country. Some may want to debate whether or not this particular verse of scripture was written to address his specific question; but, he was right to inform his conscience with the word of God.

Often people want to render unto Caesar the things that are God’s, and that includes the conscience. We are taught by Saint Paul to be subject to the authorities, in modern terminology, to be model citizens (Romans 13:1f). In every way we obey the law, pay taxes, and respect the offices of those in government. In this way we render unto Caesar what is his due. However, the fact is that within a short time Saint Paul would be a prisoner, and all Christians living in the Roman empire would be fugitives and criminals, according to the state. In the Roman Empire, from Nero until Constantine (about 250 years), the crime of being a Christian was punishable by death. Is there a built in flaw in Saint Paul’s words? Why would law-breakers hold to a doctrine that requires them to be law abiding, model citizens?

To answer that question, we need to understand the boundary line, and that boundary line is the conscience. Furthermore, for a Christian, the conscience cannot be simply a matter of taste, or of feelings. We are required to inform the conscience by the word of God. When I see a “keep off the grass” sign I want to walk on the grass simply because of the sign: but that is not a matter of conscience. When I think the speed limit is too slow I want to break it, but that is not a matter of conscience either. This applies to all authority, even in the Church. When I was in Maryland years ago, my bishop then made it a matter of obedience that I was to go on a diet and lose weight; I thought long and hard searching for a reason why a diet would violate my conscience; but I could not find one.

The conscience of the Christian is supposed to be informed by the word of God, and so it is the duty of every Christian to learn the scriptures and to learn the meaning of the scriptures from the Tradition of the Church. When the conscience finds itself pitted against authority, it ought to be for a very clear and very real reason. When Saint Peter was before the Sanhedrin, they ordered him and his fellow apostles not to preach the Gospel. But, the risen Christ to whom was given all authority in Heaven and Earth, had commanded them to preach His Gospel to all Judea, and then to Samaria, and to the uttermost parts of the earth. Therefore, speaking with respect and humility, they made it clear that they were determined to obey the Higher Authority.

“And when they had brought them, they set them before the council: and the high priest asked them, saying, Did not we straitly command you that ye should not teach in this name? and, behold, ye have filled Jerusalem with your doctrine, and intend to bring this man's blood upon us. Then Peter and the other apostles answered and said, We ought to obey God rather than men.” (Acts 5: 27-29)

This was not rebellion; it was men under authority clarifying why they must obey God. When we speak of the role of the conscience, it must be based upon this very thing; obeying God, even if it must be “rather than men.”

Totalitarian regimes want to take the place of God. Tyrants want to displace the conscience. In the last Century Christians were subjected to more injustices than during the Roman persecution (and we see no sign that things are getting any better). In the 20th century more Christians died as martyrs than in all previous centuries of the Church combined. Hitler, Mussolini, Stalin, etc, all wanted to be obeyed absolutely, to dominate the conscience of their subjects, to be in the place of God. And, so it remains in this century. The Christians who have been killed for their faith knew something we need to know: We ought to obey God rather than men. When Jesus gave this answer, it was to a hostile question. The question was meant as a weapon, a clever no win scenario. But, the answer teaches us the priorities by which we order our lives as men under authority.

Your first obedience is to God. Your conscience was designed by the Creator to be the voice inside of you where his Law is written, the inner voice that resonates with the Holy Spirit, and with the word of God. Therefore, the Book of Exodus praises the midwives who refused to murder the male children at Pharaoh’s command. The Bible praises the faith of Rahab who hid the spies, and of Esther who entered the king’s chamber unbidden to plead for the lives of her people. The same Bible condemns the obedience that Doeg the Edomite rendered to Saul when he murdered the priests at Nob as commanded by the mad king. Moral priorities must never be set aside to obey Caesar. "I was only obeying orders," is no true defense, not only in a court room, but also before the throne of God.

In the Epistle we see the very high standard set for the clergy, that we are supposed to live as examples to be followed, just as Saint Paul said in another place, “Be followers of me, as I am of Christ (I Cor. 11:1)”- a tall order, and one that we cannot disregard. We all know about the scandal a few years ago in that other denomination, in which a man was elected to become a bishop even though he was living in “that kind of relationship” with another man. As I pointed out in the pages of Touchstone, before it ever got to that point, he ought to have been defrocked simply for leaving his wife, and abandoning his child. The priesthood has at its very core the sacraments, and also the ministry of the word of God. How can a man represent the sacraments and the word of God by his life, when he becomes notorious for violating and despising the sacrament of marriage, and thereby the whole sacramental ministry and life of the Church, and also thereby lives in open disobedience to the word of God in scripture? 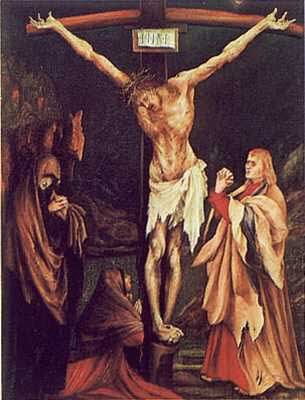 Of course it causes offense. It is supposed to! “The offense of the cross” was very real to the Apostle Paul, because he made the meaning of the cross very clear by his preaching. We must take up the cross in order to follow Jesus Christ; we must die every day to our own desires whenever they are against God’s revealed will. Also, the cross tells everyone, even the most self-righteous person, just how displeased God is with his sins. It forces him to face the truth about himself, from which he would rather shield his eyes. It gives us the objective standard of divine judgment that each of us deserves. I see Jesus Christ suffering and bleeding, and I see the just punishment I deserve. All pride is gone at the foot of the cross, as is all self-deception.

But, just as we see the sentence of divine judgment, it is only in the cross that we see mercy. It is there that we see the love of God fully revealed. In all human history, there is one event in which God has shown His love more than in any other time and place. A few years ago a young couple was in my office, in Arizona, because they wanted to find a church that, as they put it, matched their own values and beliefs, and where they could bring up children accordingly. But, they had come to me thinking, for some reason, we had something to do with the Episcopal Church; they were looking for a place that blessed “gay” unions, has women priests, and affirmed everybody in his chosen life style. They wanted “feel good” religion, with no cross at its core. Their definition of “love” was not from the thirteenth chapter of First Corinthians, but rather seemed to be all about physical satisfaction and gratification of desire. I asked them to tell me where, in the whole history of the world, we see the love of God more than in any other? They had no answer, so I had to provide the answer for them (even though a crucifix was hanging on the wall right before their eyes). I hope the Holy Spirit will use the words I spoke to trouble their hearts and lead them to the truth. The idea that “God commendeth His love toward us in that, while we were yet sinners, Christ died for us (Romans 5:8)” was brand new to them, a completely strange idea as if from another world.

The love of God in the cross tells us that His love is not an easy kind of love, filled with unconditional acceptance. Instead, it is a very demanding love. It not only forgives, but calls us to a higher and better place, giving every believer the vocation to become a saint. Love that is spoken through pain and suffering, scourging and spear, thorn and nails, shakes our world to its very foundation, making us start over and implore Him to make all things new. This is the love that is the offense of the cross. And, when we see this, we may begin to render unto God the things that are God’s.
Posted by Fr. Robert Hart at Saturday, November 14, 2009

Marvelous discourse, Fr. Hart! I especially appreciate the comments about the enemies of the cross desiring a weakened Jesus and a religion of comfort with no sacrifice and pain.

Quite to the point.