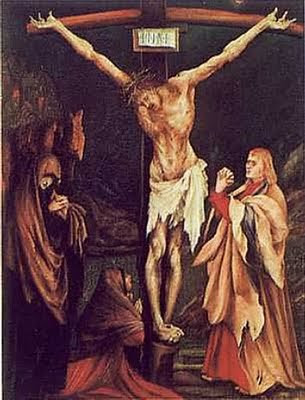 The Small Crucifixion by Matthias Grunewald

The parable of the Unforgiving Servant should remind us of words that the Lord spoke earlier in the same Gospel, in the sixth chapter:

After this manner therefore pray ye: Our Father which art in heaven, Hallowed be thy name. Thy kingdom come. Thy will be done in earth, as it is in heaven. Give us this day our daily bread. And forgive us our debts, as we forgive our debtors. And lead us not into temptation, but deliver us from evil: For thine is the kingdom, and the power, and the glory, for ever. Amen. For if ye forgive men their trespasses, your heavenly Father will also forgive you: But if ye forgive not men their trespasses, neither will your Father forgive your trespasses. (Matt. 6:9-15)

Later today in this service of Holy Communion we will be bold to say “Our Father.” Following the Prayer Book translation of 1549, we will use the word “trespasses” instead of the word “debts” from the King James Bible, published later, in 1611. However, the word “debts” is actually a more accurate translation of the Greek word ὀφείλημα (opheilema) .

The servant owed the king ten thousand talents, but was owed by his fellow servant a mere one hundred pence. The difference is staggering, sort of like a man who was released from a debt of a million dollars demanding full payment from another man who owed about, as one hundred pence suggests, ten dollars. Frankly, the use of absurdity is a method of humor that Christ employed in His teaching (“ye strain out a gnat and swallow a camel” - a perfectly ridiculous picture). But, the fact is that both men in this story were too poor to pay, and could have faced a lifetime of debtor’s prison or slavery unless they were given mercy.

When the Lord Jesus addresses the issue of our sins He forces us to face the fact that we are much too subjective. We do not look at the world objectively, but rather as it affects us, and how we feel. So He compares the act of repentance from our cherished sins to the pain of self-mutilation, an act of amputation. Go back to chapter five:

For people who are fond of their sins, to repent can feel like self-mutilation, as hard as pulling out an eye, or cutting off a hand. That bit of lust, that secret desire- how can they live without it? The price of holding on to sins, including cherished sins, is far worse than being maimed, loosing an eye or a hand. It is an eternity of separation from God. The danger is that those who do not repent in this life could cling to their sins forever, growing more attached to them, going only further into darkness, into Hell.

The same subjectivity that deceives us about our own sins, and makes repentance seem painful (painful, that is, until we have done it and realize that we are free), is the same cursed subjectivity that distorts the truth about the offenses that others have committed against us. And so it is that the mercy that was just shown to us, the mercy that forgave us our million-dollar debt, seems small compared to the ten dollars that other guy owes us. That is what sin does to our common sense; that is how it distorts our perspective.

I hope this puts the million-dollar debt against the ten-dollar debt into perspective. Furthermore, we have three classes of wrongs. Some wrongs are very real, for if you live in the real world, somebody somewhere, perhaps even somebody close to you, has hurt you or wronged you. These are the real offenses against you. Other wrongs are simply perceived wrongs, but they seem to be real. Perceived wrongs can be accidental, or maybe even things others have done innocently or even quite correctly because they had to; but from our perspective they appear to be wrong. A third category is the grudge, the wrong we refuse to forgive. Be it real or simply perceived, be it a wrong done to us, or a grudge we bear out of loyalty to another person who bore his own grudge, and for whose sake we must carry on the grudge so as not to feel disloyal to a friend, one who may be dead or alive. Whatever, if we bear a grudge for own sake or for the sake of someone else, it is killing us, bringing death into our own spirit unless we cast it off.

I know, I know, it feels like a bigger debt than ten dollars. Bad enough those strangers who hurt you; but if it is a person close to you… That person ought to be dropped into boiling oil, because his ten-dollar debt is so big, so much bigger than the million you once owed the king before he frankly forgave you all. There it is, the curse of subjectivity. Do you know why you are asked to forgive your debtor? For the same reason that God your Father forgives you your debts. You must forgive for the sake of the One Who shed His blood to atone for every sin against God. He bought their forgiveness from the Father, and for His sake you must pray for their salvation.

What will you really mean when you pray today, “forgive us our trespasses, as we forgive those who have trespassed against us?” Taken in one sense you maybe would not want to ask such a thing. Who would want to limit God’s mercy to the smallness of our mercy? To understand the meaning of this prayer, look at the version of the same prayer from the Gospel of Luke: “And forgive us our sins; for we also forgive every one that is indebted to us.” (Luke 11:4)

And so we see that when you pray these words you are actually pronouncing forgiveness upon everyone who has hurt you. At least, that is how you are supposed to mean it. “Forgive us our debts, as we here and now forgive everyone who is our debtor.” You are pronouncing your forgiveness in the very words of this prayer. And, this brings us to that last problem of subjectivity. You are not forgiving because your emotions agree with the need you have to show mercy. Indeed, your emotions may not agree. But, like that repentance that may seem to be as impossible as cutting off a hand, the pain is not real. The freedom that follows the effort, once the deed is done and the decision made, outweighs the pain we had imagined. Destroy your resentment, cast if off, have done with it, and find your freedom. 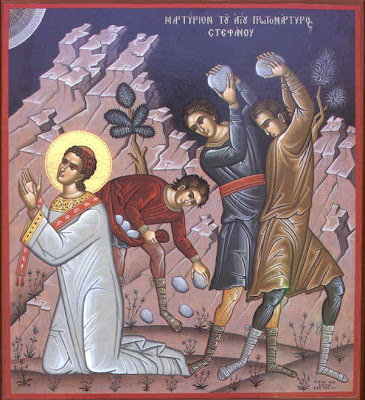 Ye stiffnecked and uncircumcised in heart and ears, ye do always resist the Holy Ghost: as your fathers did, so do ye. Which of the prophets have not your fathers persecuted? and they have slain them which shewed before of the coming of the Just One; of whom ye have been now the betrayers and murderers: Who have received the law by the disposition of angels, and have not kept it. When they heard these things, they were cut to the heart, and they gnashed on him with their teeth. But he, being full of the Holy Ghost, looked up steadfastly into heaven, and saw the glory of God, and Jesus standing on the right hand of God. And said, Behold, I see the heavens opened, and the Son of man standing on the right hand of God. Then they cried out with a loud voice, and stopped their ears, and ran upon him with one accord, and cast him out of the city, and stoned him: and the witnesses laid down their clothes at a young man's feet, whose name was Saul. And they stoned Stephen, calling upon God, and saying, Lord Jesus, receive my spirit. And he kneeled down, and cried with a loud voice, Lord, lay not this sin to their charge. And when he had said this, he fell asleep. (Acts 7:57-60)

Saint Stephen had an advantage that Zechariah, centuries before, did not have. We do not criticize Zechariah for demanding justice when he died, because, unlike Saint Stephen, he could not look back to Jesus Christ on the cross. We all know the words from the Gospel of Luke: words spoken by Jesus as He was hanging upon the cross: “Then said Jesus, Father, forgive them; for they know not what they do.” (Luke 24: 34) The Word made Flesh, God the Son in His human nature, showed us what mercy truly is. We already knew that God, from heaven, forgives sins. God cannot be harmed, wronged or deprived of anything. Yet, as a Man, it is God who was mocked, beaten and crucified by sinful men, and who pronounced forgiveness. No angel can preach on this subject as well as you and I can, for it takes human frailty to understand the reality of forgiveness, especially if we forgive after we have suffered.

So we do not criticize the holy prophet, Zechariah, of the Old Testament; Instead, we see that Saint Stephen had even more grace, for he could look back to God the Son, in His human nature, forgiving the very men who were murdering Him, who were enjoying the spectacle of His suffering, as they displayed the depths of schadenfreude. Saint Stephen could recall God in the flesh forgiving genuine pains that were inflicted upon His Person.

May our Lord Jesus, grant to us the joy that comes when we are free to love everyone, including those who have wronged us, with that charity placed within us by the Holy Ghost; for only that God-given charity can make us perfect, as our Father in heaven is perfect. Amen

1. "It is paid in full" is an acceptable alternative translation of the words rendered "It is finished" in John 19:30. The Greek word used is τελέω (teleo). It means to finish, and was used often to speak of complete payment of a debt.

tetelestai was the word used in the papyri meaning "paid in full" at the end of a running account of a debt. Fr Hart is right on the point.
LKW

Very good posting, Fr. Hart. It reminds me of how far short of the mark I fall.