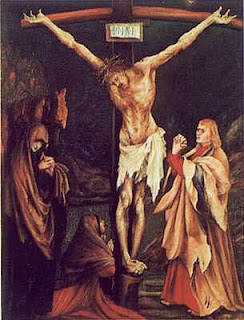 Now we come to this evening, the evening following the death and Passion of our Saviour. About this evening poets have spoken. About this evening, we find these passages at the ending of Bach’s St. Matthew Passion (translated from the German):
At evening, hour of calm and peace,
was Adam’s fall made manifest;
At evening too, the Lord’s redeeming love.
At evening, homeward turned the dove,
an olive-leaf the while she bore.
O beauteous time, O evening hour!
Our peace with God is evermore assured,
For Jesu hath His cross endured...
We sit down in tears and call to Thee in the tomb:
Rest softly, softly rest!
Rest, ye exhausted limbs,
Rest softly, rest well,
Your grave and tombstone
Shall for the unquiet conscience be a comfortable pillow
and the soul’s resting place.
In utmost bliss the eyes slumber there.
We sit down in tears and call to Thee in the tomb:
Rest softly, softly rest.
Yes, the unquiet conscience is itself a gift from God. We live in a time that follows decades of psycho-babble about the need for man to be liberated from the Tradition which demands that he suppress his desires and cravings, the alleged needs of his true nature as a noble savage. What rot, what foolishness, as if the conscience of man and his moral sense is the part of his nature that he must suppress. We have seen the results of this imagination, this high thing that has exalted itself against the knowledge of God, having created a broken society due to broken families, and the creation of broken individuals. These wander in darkness more severe than any since before the Gospel and the Church made a civilization where once stood only a world of pagan cruelty. Reversion back to this cruelty is the mark of our time, a false liberty celebrated less and less as people find themselves living with the tyranny of bad philosophy.

The conscience is the gift of God, and the feeling of guilt is not some medical disability to be cured. Thank God we have a conscience, and thank God we have enough self worth to feel guilt, for we know that we can live up to a higher calling than the calling of sin and death. We also know that we cannot do so without His grace. When this evening comes, and we see that Jesus has endured His cross, we are given both that calling and that grace.We read in the Epistle to the Hebrew that we have boldness to enter into the holiest, meaning into the very presence, the Real Presence [pointing to the ciborium on the side altar being Good Friday] of the Living God.
Hear again the words:
(Heb. 10:19f): Having therefore, brethren, boldness to enter into the holiest by the blood of Jesus, By a new and living way, which he hath consecrated for us, through the veil, that is to say, his flesh; And having an high priest over the house of God; Let us draw near with a true heart in full assurance of faith, having our hearts sprinkled from an evil conscience, and our bodies washed with pure water. Let us hold fast the profession of our faith without wavering; (for he is faithful that promised;)
This is the day which fulfills the meaning of the slaying of the Passover Lamb and also of Yom Kippur, that is, the Day of Atonement. That was the day in which the High Priest made the sin offering for the whole nation, and in which the scapegoat was led away. The Sin Offering that was killed was a type and shadow of the One True Sacrifice, the One True Offering made by the true High Priest, of which the sons of Aaron were themselves merely types and shadows. By His One Offering of Himself for sin, He put away sin forever. This is what the Epistle is mostly about, Christ the Kippur, the Atonement. The scapegoat was the type of Christ’s spirit descending to hell, to Hades actually, where He would preach to the spirits in prison, and bring the saints of the Old Testament out of their graves to be, with Him, the first fruits of Resurrection and of the World to Come (as we see from St. Matthew’s Gospel). But, on Good Friday we have come to the time of His death and burial. We can see that death and burial in one of two ways. Either it is a tragedy, no more than a simple injustice, one among millions in the history of a sinful and fallen world. Or, we can believe the truth which I preached to you on Palm Sunday, that no man took His life from Him; He gave it by His own power and His own will. He had power, as He said, to lay it down, and He had power to take it again.

His death is the One True Kippur, the atonement for all sin. “He is the Propitiation for our sins, and not for ours only, but also for the sins of the whole world.” He is the One for the many, by which the many who were made sinners in Adam are made righteous in Christ.We are told to come in full assurance of faith, having our hearts sprinkled from an evil conscience. That word, “sprinkled” needs to be explained. “Without,” says this same Epistle to the Hebrews, “the shedding of blood, there is no forgiveness for sins.” The sprinkling is with the blood of Christ, just as Moses sprinkled the people, just as the Levitical priests would sprinkle the blood of sacrifices. For us there is no need of animal blood; just as we need to kill no sacrifice on our altar, since the altar we have is meant to show that the True Sacrifice for sin was made, and we participate in that one Offering of Christ, both Priest and Sacrifice. The conscience and the heart are sprinkled by the blood of Christ if we come in full assurance of faith. This gift is effective, abundantly given to those who believe.

Again, the place of conscience must be understood. We feel the sting of conviction, the good and right office of guilt doing its wholesome work, whether or not the spirit of the age and the psycho-babblers agree. The conscience is aware of sin, aware of guilt, and forecasts the danger of judgment and of etrenal separation from God. We want to come to the Holy Place, but we dare not. It may help to abandon all true religion, and take up a contemporary “spirituality” in its place. You perhaps know my meaning, the kind of “spirituality” which has no moral obligation but to affirm oneself and to seek power as a possession. The effect, if we succeed in such a thing, is simply deception, and the worst kind of deception, for it teaches us to kill the voice of conscience, and to eschew guilt. It truly suppresses our nature, it suppresses conscience, and moral sense, and so causes the very maladies wrongly ascribed to the Tradition of the Catholic Faith, to the Word of God. The conscience is not quieted simply because it is hushed.

But, if ever it becomes quiet, God has given us over, and we are lost; the alienation beginning in this life cannot feel like freedom for very long, nor can it be eased after death.Let the conscience perform its wholesome and healing office. For with all our embrace of genuine guilty conviction, we also embrace the Gospel. The cross is at once our diagnosis and our cure. The cross shows sin in all of its ugly, violent and cruel reality. The cross shows the Divine sentence upon sin, and the rejection of all that sin is. The cross shows the love of God for all sinners everywhere, for you and for me. The cross is the forgiveness of sin, the poured out blood of sacrifice, the blood sprinkled on the mercy seat. It is the place where perfect justice and perfect mercy meet. It is the place of condemnation and of forgiveness. It is where our hearts are sprinkled and our consciences are made whole.When we have been to the cross, we can enter into the presence of God with boldness, being made new and alive through Jesus Christ. The conscience takes on an even higher function of being the voice of the Holy Spirit, the Law of God written on our hearts, not simply to convict, but to instruct in the way of freedom, of life and of peace with God.

So the Epistle continues:
23: Let us hold fast the profession of our faith without wavering; (for he is faithful that promised;) And let us consider one another to provoke unto love and to good works...
Beware of the kind of religion St. Paul warned against:
(Phil. 3: 17f ) :Brethren, be followers together of me, and mark them which walk so as ye have us for an ensample. (For many walk, of whom I have told you often, and now tell you even weeping, that they are the enemies of the cross of Christ: Whose end is destruction, whose God is their belly, and whose glory is in their shame, who mind earthly things.) For our conversation is in heaven; from whence also we look for the Saviour, the Lord Jesus Christ:
St. Paul spoke of enemies of the cross of Christ. Such people probably think themselves to be friends of Jesus Christ, and may delude themselves that they love Him. But, to hate His cross is to be His enemy; for it was His work, His great act of love. He did embrace it, and carry it, and let Himself be nailed to it. He commands, also, that we take up our cross, and say no to worldly lusts, and to all self exaltation. We are to walk in the way of Christ, the way of the cross. This is how to live with a good and healthy conscience.
Posted by Fr. Robert Hart at Friday, April 06, 2007