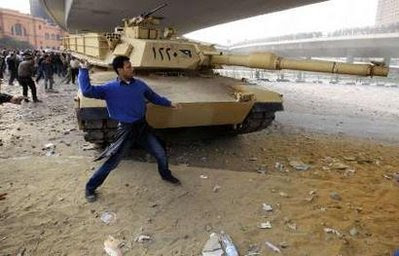 The current news about Egypt's political unrest certainly requires the prayers of Christians everywhere, especially "thy will be done." The Middle East is not safe for Democracy; in fact no place on earth really is. Benjamin Franklin said "Democracy is two wolves and a lamb voting on what to have for lunch. Liberty is a well-armed lamb contesting the vote." The image of Americans treating the unrest as some great opportunity to "spread Democracy" is particularly troubling. In 2006 the sloganeering of the Bush administration, about spreading Democracy, took a heavy blow when Palestinians voted to make Hamas the majority party, a terrorist organization bent on destroying the nation of Israel, and on killing Jews wherever they may be found (so says the Hamas charter). Democracy does not work for good in a psychiatric ward.

What we have in our own western countries is not really Democracy anyway, but the rule of law. In the United states that rule is inscribed in the Constitution, which establishes a democratic republic in which the rights of minorities are protected against the potential tyranny of an unjust majority. But, in the Middle East, with the Muslim Brotherhood waiting to seize the moment, the worst thing that can happen is for real democracy to take hold. The Islamist wolves would vote to eat the Christian lambs for lunch, and to go after Israel for dinner.

Egypt has, at this time, no official persecution. In fact it has laws to protect the Christians. The problem is, those laws are not enforced. As one Egyptian refugee, a Coptic Christian, told me back in 2005, "In my country the mass killing of Christians is commonplace." The local police throughout the country of Egypt generally follow up on the mass killings of Christians, and other atrocities, by persecuting the Christians who dare to complain and ask for police protection. We saw that in an especially dramatic way at the very beginning of the year.

Bad as it is, the situation could get worse. The national government of Egypt could be taken over by the same kind of Islamist radicals who control Iran, where conversion to Christianity is punishable by death, and where the government is making nuclear weapons intended for the destruction of Israel. The unrest in Egypt and throughout the Middle East seems much more likely to lead to an increase of danger, rather than to some great opportunity for spreading freedom. Democracy, as Benjamin Franklin defined it, is no small part of that danger.

Our prayers ought to be with the persecuted Christians, already enduring too much. Also, we might pray that God will restrain the powers of violence.

ALMIGHTY God, our heavenly Father, guide, we beseech thee, the Nations of the world into the way of justice and truth, and establish among them that peace which is the fruit of righteousness, that they may become the Kingdom of our Lord and Saviour Jesus Christ. Amen.
Posted by Fr. Robert Hart at Thursday, February 03, 2011