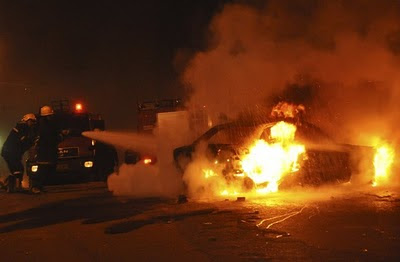 Egyptian firemen try to put out a fire on a vehicle following a car bombing in front of a Coptic Christian Church in the Egyptian city of Alexandria, Egypt, early Saturday, Jan. 1, 2011. The car exploded in front of the church as worshipers emerged from a New Year's Mass in the Mediterranean port city early Saturday, killing at least seven people (update, currently the death toll is 21), officials said. (AP Photo)
See story here.
Posted by Fr. Robert Hart at Saturday, January 01, 2011

I believe that it was Jonathan Lord Sacks, Chief Rabbi in England, who said, aptly, a propos of other Islamic bombings: "You don't get to heaven by creating hell on earth." Motivating such demonic action is a diamond hard, arrogant and ultimately nihilistic self-righteousness, the very essence of sin.

Naught for your comfort: