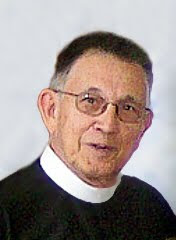 TODAY'S GOSPEL is a parable which is a sequel to the more familiar parable of the good seed of the Gospel falling on different kinds of soil with various responses. In the passage before us we see what happens when the Gospel falls on good soil. All is not well! An enemy (that is the devil) scatters bad seed there also, so that weeds grow along with the wheat.

We have here a picture of our still imperfect Church. From the time when our Lord first began to collect a company of disciples, some were more faithful than others. When the Church began to spread after His ascension, not all converts were truly converted. Many abandoned the faith under persecution or simply because of sin. St Paul wrote of "false brethren, crept in unawares," like Demas "in love with this present world," and Alexander the Coppersmith, "who did me great harm, for he strongly opposed our message."

This parable is the basis for a necessary distinction between the Church Invisible (the Church as God knows it) and the Church Visible (the church as we experience it). St Augustine of Hippo wrote, "There are many sheep without and many wolves within." Jesus firmly forbids any attempt on our part to root out the tares, to make the separation now. In a world of ambiguities, in which it is not just wrong but simply impossible to judge men's hearts, we cannot expect to have a perfect church consisting exclusively of good people. We can only give thanks to the Lord of the harvest who sends His rain and sunshine on the righteous and unrighteous alike, knowing that a separation will truly be made when He comes again.

Today's Collect, Epistle and Gospel are more likely to be read in the final Sundays of Trinity Season. This explains the reference to the harvest, when the wheat and tares, like the sheep and the goats, the faithful and the unfaithful, will have their final and permanent separation.

Our first reading today comes from Paul's apostolic letter to the Church at Colossae . It contains one striking expression, “singing psalms and hymns and spiritual songs, with thankfulness in your hearts to God.” Most of the passage is familiar advice which we can never hear often enough. But this verse (which has an echo in Ephesians 5:19) gives us an unusual glimpse into the liturgical practice of the Church in Paul's time.

The Biblical faith, in both Testaments, is a joyful, singing faith. One entire book of the Old Testament, the Book of Psalms, is nothing but a Hymnbook, designed for use in the Temple and synagogues. It is the only book of the Bible given in its entirety in our Prayer Book. In all the accounts of the Last Supper, when our dear Lord instituted the sacrament of His Body and Blood, we are told that they sung a hymn before leaving the upper room. This was certainly the Paschal “Hallel,” the series of Psalms which made up the Passover liturgy. In those days they had no printed hymnals so the liturgical leader himself chanted the psalms as a solo, with the others joining in with refrains. It is wonderful to imagine Jesus Himself leading the singing!

The expression “psalms, hymns, spiritual songs” seems to imply three types of compositions sung in the Christian assemblies. The “psalms” which Paul mentions were almost definitely the psalms of the Old Testament. The “hymns” were newly composed, celebrating Jesus and His victory. We have numerous traces of such hymns in Paul's letters and in the Book of Revelation. An example is the great hymn in Philippians 2, which you will find on page 134 of your Prayer Book and which is echoed in Hymn 356. As for the “spiritual songs,” we cannot be sure what Paul meant. But in that time there was little distinction between “hymns” and “prayers,” since prayers were always chanted and never just said. Perhaps Paul was thinking of something not unlike our spontaneous prayers.

This text is a reminder of how valuable and precious is our great heritage of hymn-singing. As much as we treasure our Prayer Book, without our Hymnals we would surely be spiritually impoverished. In the 600 hymns of The Hymnal 1940 (what a noble book it is!) we have 20 centuries of Christian spirituality, 20 centuries of saints both Catholic and Protestant, singing together to the praise and glory of the gracious God who made all things and who has redeemed us in Christ. We praise Him together now on earth and we will give glory to Him in heaven forever, singing the “new song” around the throne of the Lamb. LKW