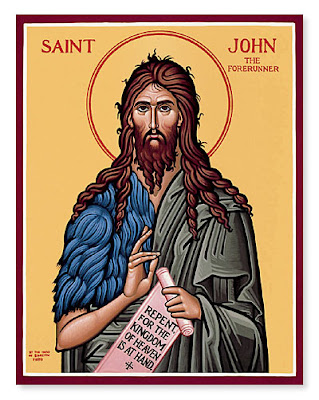 Again we are given that mysterious image of John the Baptist, the burning and shining light who bore witness by his life and death to Jesus Christ. “He must increase, and I must decrease,” said this prophet, this man whose unique vocation was that he bridged the Old Testament and the New. Two weeks ago we saw that all of the scriptures bore witness to Jesus Christ; and now, this last prophet of the Old Covenant bears direct witness to Christ, baptizing Him, and seeing the Spirit of God come upon Him as a dove out of Heaven. This last prophet of the Old Covenant is the first prophet of the New Covenant. The Lord said through the prophet Isaiah, “Behold, I will do a new thing; now it shall spring forth; shall ye not know it? I will even make a way in the wilderness, and rivers in the desert (Isa. 43: 19).” God called this prophet, this unique prophet, to show that the new thing, the New Covenant spoken of by Jeremiah the prophet (Jer. 31:31f) was upon them. John’s father was a priest under the Law of Moses, a descendent of Aaron. Therefore, John was also, by that Law, a priest. Yet, John the son of Zechariah, went into the desert to be the voice of one crying in the wilderness, “prepare the way of the Lord.”

Now, about the comings of Jesus Christ, and the life of this mysterious John the Baptist, we should dig a little deeper. The word “Christ” is from the Greek for the Hebrew word Meshiach, or as we pronounce it in English, Messiah. We have come to call the Lord by two names more than all others, Jesus and Christ. The one means Salvation- Y’shua. The other means “the anointed” – Meshiach. The implication is the Old Testament expression, “the Lord’s Anointed.” This comes with two pictures, as the word "messiah" is sprinkled generously throughout the pages of the Old Testament. The word speaks of priests and kings, and the anointing comes by the hand of a prophet.

The first men to be called meshiach were the brother of Moses, Aaron the High Priest, and his sons the priests. The King James Bible uses the phrase “the priest that is anointed.” The original Hebrew is h’ kohan h’ meshiach- “the priest the messiah.” The second class of men to be called messiah (meshiach) are the kings. David would not stretch forth his hand against Saul, because he was “the Lord’s anointed.” That is, the Lord’s messiah. Every priest was a messiah, and every king was a messiah. And, yet, the scriptures clearly speak of the one Man who would be both priest and king, and who would be the only hope of the whole world, being the one Jews call H’ Meshiach- The Messiah. So, first Messiah is the priest, and then after that He is the King.

John the Baptist prepared the way of the Lord by his message of repentance. Pondering these pictures of the Messiah as priest and King we are both warned and encouraged with both fear and hope. This is the meaning of Advent. It is of eternal consequence that we give heed.
Posted by Fr. Robert Hart at Saturday, December 20, 2008

This is a truly great sermon, and one that people throughout the church need to hear. This sermon makes clear that any attempt to reach perfection or goodness or fulfillment, self realization, nirvana, heaven, or whatever man's mind can conceive of as the ultimate reality can only be reached through Jesus Christ. There is no other way, and that is what infuriates the world and the devils.