Christmas The Feast of the Nativity 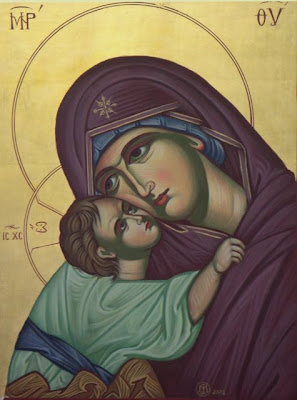 "Then the babe, the world's Redeemer

I never tire of the prologue to St. John’s Gospel. This is the Gospel for the first Mass of Christmas, which is also the last Gospel of almost every High Mass. These words are hakadesh hakadeshim- the holy of holies- in all of scripture.

I have no need this day to stand here and relate any personal story, or any tale of fiction. The finest and most entertaining story cannot begin to compare with these words which we have heard from scripture. Though we hear the opening of St. John’s Gospel on every Sunday outside of Advent and Lent, we cannot hear it enough. It cannot become tiresome though we were to read it daily. In fact, listen to the words of our hymns this day. In Hark the Herald, look at Charles Wesley’s words, especially the second verse (the verse beginning Christ by highest heaven adored). Such words as these can never become tiresome either.

A Roman Catholic priest of my acquaintance via e-mail, Fr. Joseph Wilson, wrote, in an article, that it is impossible to overemphasize the Incarnation. How right he is. Many heresies come about by overemphasis on one little part of Christian truth at the expense of the rest of it. This cannot happen to the doctrine of the Incarnation, for it contains all of the truth in itself. This truth, that Christ is God the Son come to us in the fullness both of His Divine Nature, and of His human nature, is the truth, the central doctrine, of Christianity. Take it away and we have nothing. Keep it, and we have everything. No wonder St. John also tells us that this simple true statement, that Jesus Christ is come in the flesh, is the one doctrine that the spirit of Antichrist refuses to permit.

The doctrine of the Incarnation contains all of the truth of Christianity. The full revelation of the Trinity becomes necessary for God is the Son, and God is the Father; but the Son is not the Father. And the Son is present with us by the Holy Spirit. But, the Son and the Father are not the Holy Spirit. Yet, every Jew always knew that there is only One God- sh’mai Israel... The truth of the Incarnation opens more questions than it gives answers; the questions are because God is revealed fully by Jesus as being, in His words, The Father, the Son and the Holy Ghost. He leaves us this new name for God, and teaches us that we can spend eternity asking questions about the infinity of the True and Living God because He will always be beyond our full comprehension. Yet, because He can walk among us as a man, in the person of the Son, we can know Him. He is beyond us forever; He is with us forever. His name is called Emmanuel- God with us.

The truth of the Incarnation tells us that we are sinners, lost because we are lost in sin. The light shines not against lesser light, but in the very darkness itself, a darkness that neither understands nor can solve the problem of this bothersome light. The darkness comprehended it not, the darkness into which we have fallen, and in which we were blind. Even many of the very chosen people themselves received not this Light; no wonder then that most of the world cannot receive Him either. Those who can receive Him do so because they face the light. This light hurts our eyes at first; for it tells the truth, the truth about ourselves which we wanted never to see nor hear.

The writer to the Hebrews wastes no time in telling us that this Man, the Son of God who is the very icon of the Father, in Whom the glory of God is perfectly seen, has purged our sins. The Gospel we read in the second Mass of Christmas is from St. Luke. In it the words of the angels are heard, “Glory to God in the Highest, and on earth peace, goodwill toward men.” What peace is this? Is it some magic that makes sinful and fallen men stop waging war, as if the cessation of violence is actually worthy in itself to be called peace? Is not the greater war shown to us in scripture? That God has a right to wage war upon man because of our sins? As early as the story of Noah’s flood we see that God accepted the sacrifice of Noah after the flood- a sacrifice that pointed to Christ’s own death on the cross as did all the sacrifices. We are told that God hung up His bow as a sign in the heavens. He hung up what we call the rainbow, His bow of warfare, and promised not to destroy mankind from the face of the earth. This is the peace of which the angels speak. The sacrifice that had been offered in the story of Noah, after he came out of the ark, was only a type and shadow of the cross, the shadow of which hung already, over a newborn infant Son lying asleep in a manger. This night is answered by "the night in which he was betrayed." Only by his cross, by his sacrifice, is peace made between God and fallen mankind.

“Nails, spear shall pierce Him through

a cross be borne for me for you,

hail, hail the Word made flesh,

the Babe the Son of Mary.”

All of the events to come, right up to His dying and rising again are foretold in these words of the angels. We do not see goodwill among men, as some misinterpret the angelic words, but goodwill toward men, from God. The whole revelation that God is Love is thus given to us, also, by the Incarnation. This is the great gift of love, that He would give His own Son; He offers the sacrifice that He would not allow our father Abraham to make. Abraham was ready to obey God, and prepared to offer his son, his only son Isaac whom he loved, upon whom had been laid the wood of the altar while they had climbed Mount Moriah.

Abraham was spared this terrible agony of slaying his beloved son, because God used this dramatic means to teach His people that He would never accept the sacrifice of their children, such sacrifices as the pagans made to what were no gods. But, God in His love gives His only begotten Son Whom He loves. This is the goodwill toward men. This goodwill was seen that night in the manger in Bethlehem; this goodwill was seen on the cross many years later on a Friday afternoon.

In the Incarnation, now revealed, we see that God would call a people to be His children, adopting them in the very Person of His only begotten Son; for as St. Paul tells us, we are in Christ. It is because we are in the Beloved, in the Son Himself, that we are chosen by God for salvation, instead of having been abandoned to the fate we had deserved for ourselves.

We see also that He would establish His Church, and give to it His Word and Sacraments for the salvation of all who believe the Gospel. St. John, in opening his First Epistle, tells us that he had been among those whose hands had handled, and whose eyes had seen the Word of Life; and he goes on to tell us that we too are called to fellowship with God and His Son Jesus Christ through the invitation of the apostles. St. John is telling us that in the Church the sacraments are given and God’s Word is spoken, that we may know Him. Without the Incarnation the apostles have no word to tell, and there is then no Word from God, nor any sacraments. Because of the Incarnation we are given the Word of His truth. And the sacraments stem from His own coming in the flesh, and are given to us only because He was given to us when He came in our own nature, a created nature that was alien to His uncreated Person as God the only Son, eternally begotten of the Father.

In his classic, On the Incarnation, St. Athanasius said that while Christ walked the earth as man, He still filled the heavens as God. The Council Of Chalcedon taught us that He is fully God, being of the same nature as that of the Father, and fully human, being of the same human nature as ourselves, like us in every way except for sin, having human nature from his mother Mary, the Virgin, the Theotokos- which means that God the Son has a mother; and he is "like us in every respect apart from sin."

None of this is explained to us. How is it that God is made man, that the Word is made flesh and that He dwelt among us, that we beheld His glory? We do not really know all the answers- which is part of the revelation. God cannot be figured out, dissected and explained. He cannot be understood, analyzed and described. But, He can be known through Christ, the Only Mediator Who Himself is God and Man.

How do sacraments work? How is bread and wine made into the Real Presence of the Living Christ? How does water, with the right words, give new life when applied to human flesh? How can priests, themselves men, forgive sins? How did Christ’s death take away the sins of the world? How does His resurrection save us from death? If we needed to know the answers in some mechanical way, then salvation would be reserved only for people far too clever for the likes of me. The point is to know that it is beyond our understanding, because we are not God. We know not the how of it. But, what we do not understand we can know; we can know the love of God shown to us in the coming of Christ into the world. “For God so loved the world,” and that is the why of it.

Far beyond the seraph’s thought,

Art Thou then so mean and lowly

O the magnitude of meekness!

Worth from worth immortal sprung;

O the strength of infant weakness,

if eternal is so young.

God all bounteous, all creative,

Whom no ills from good dissuade,

Is Incarnate and a native

Of the very world He made.

Now unto God the Father, God the Son and God the Holy Ghost, be ascribed, as is most justly due, all might, majesty, dominion, power and glory, now and forever. Amen
Posted by Fr. Robert Hart at Monday, December 22, 2008