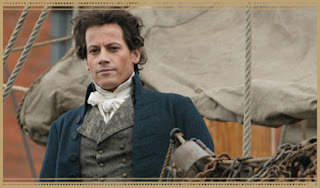 The great social reformer and Abolitionist, William Wilberforce, MP, managed to defeat the slave trade in the British Empire due to his patience, endurance, diligence, hard work, and above all, his deep and firmly stated Christian faith. The great 18th century Anglican was reinforced by his association with John Newton and with John Wesley.

The movie Amazing Grace, starring Ioan Gruffudd, with Albert Finney, written by Steven Knight, and directed by Michael Apted, tells the story of Wilberforce's fight. His Christian faith is not hidden under a bushel, as may have been done were this a Hollywood movie, rather than a British film. The movie is now available on DVD. I recommend it, and I especially recommend it as a movie that both entertains and educates, an excellent choice to show to children and young students.

I do not write such endorsements of movies often. In fact, never. But, this is an exception because it is truly a worthy film. It is both educational and inspiring. If any of us think that we may lose heart in the battles of our time, especially the battle for the sanctity of life, it can only help us to remember the battle fought by William Wilberforce.
Posted by Fr. Robert Hart at Tuesday, December 11, 2007

This movie is total propoganda. Wilberforce was scum.

Clean it up, okay?

And while I'm here, I have always been curious about your monicker: Are you a man of the cloth (rev'd) or are you in to NASCAR?

I have very little respect for anyone who would devote himself to attacks upon individuals and groups of people while hiding behind an alias, and finally I need to say something. If I could contact you in person, I wouldn't be doing this in a public format, but I can't.

Your comments on this site have been uniformly angry, sneering, and prejudiced, and now you refer us to a blatantly anti-semitic conspiracy-blathering site. Sir, I am not qualified to judge your soul, but in your words I see not a trace of Christian charity, not the smallest hint of the spirit of John 3:16, but rather the same rigidity, self-righteousness, and desire to lay all blame on someone else that Jesus condemned in the Pharisees. I could say much more, but perhaps it's wiser to stop at this point. I pray earnestly that you and those like you may trukly meet the Christ and be filled with His Spirit.

Intrigued by the short editorial on Wilberforce, I took a look at the Michael Hoffman website recommended by rev'd up. I had no idea that:

1. Judaism is an anti-Biblical religion
2. The Regime of Queen Elizabeth I is the "template for the masonic imperium and the intelligence agencies of the West.
3. The alchemical processing of humanity via psychodrama embedded in ritual crimes.

Wow! I am stunned at how this news was kept from me all of these years. In fact, I went right on line to get a copy of Mr. Hoffman's "THE HISTORY OF JUDAIC RITUAL MURDER" as well as his article with the aptly-named Paranoia Magazine in which he asserts that Ted Kaczynski (the Unabomber) is a scapegoat and that "Unabomb is a Federal government operation." As someone who spent three years in an EOD unit, I just had to finally learn that "truth".

Indeed, while I am not a psychologist, I think I am on safe ground in positing that the perpetrator of the "revisionisthistory" website not only drank the Kool-aid, but also came back for seconds!

I would say only to rev'd up, I'd be a bit more cautious in the sources of one's historical research. The websites of Holocaust-denying, anti-semite, paranoid, conspiracy theorists probably are not the best bets for building a world view--at least a world view that has any basis in reality.

On the other hand, if you find that you take the writings of a Michael Hoffman seriously, it may well be time to take a retreat and reconsider your vocation if you are, in foact,an ordained pastor, minister, priest or clergy of any sort.

Meantime, I'll join with Ed and pray for you.

Rev'd up has chosen not to respond to my invitation to identify him/herself. I have no idea whether he/she is/purports to be a clergyman/woman, but if he/she ever attempts to post something similar on this blog, he/she will be banned.

I WILL NOT TOLERATE racism, direct or oblique.

It is posthumous honor (Matt. 5:12) to Wilberforce that he is still abused and mistreated by fools- and I do mean you, rev'd up.

And now that we have dealt with that little bit of nastiness, may I say that William Wilberforce is indeed one of my heroes. The "Good Christian People" of Britain and its colonies had developed a form of slavery more intensely racist and (at least in theory) more inhuman than any of the forms then extant: a chattel slavery in which a person, merely because of the accident of birth, was considered less than human, entirely a thing to be owned, and not even entitled to the benefits of the Christian Faith (unless Master granted this as a special privi;ege). Wilberforce was a voice, sometimes nearly the only voice, against this enormous evil, and did, at least partially, succeed in his goal after much agony and effort.

One who would call him scum is either horribly ignorant or so filled with hate as to be unable to see the truth.