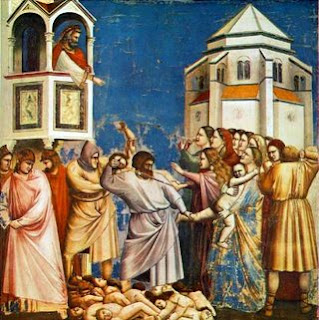 From the Roman Breviary

O God, whose praise the martyred Innocents did this day proclaim, not by speaking but by dying, do to death in us all the malice of sinfulness, that our lives may also proclaim thy faith, which our tongues profess. Through.

ALMIGHTY God, whose prayse this daye the yong innocentes thy witnesses hath confessed and shewed forth, not in speakyng but in dying; Mortifye and kyll all vyces in us, that in oure conuersacion oure lyfe maye expresse thy fayth, whiche with oure tongues we doe confesse; through Jesus Christe oure Lord.

O ALMIGHTY God, who out of the mouths of babes and sucklings hast ordained strength, and madest infants to glorify thee by their deaths; Mortify and kill all vices in us, and so strengthen us by thy grace, that by the innocency of our lives, and constancy of our faith even unto death, we may glorify thy holy Name; through Jesus Christ our Lord. Amen.

From comparing the Collects, it is clear that Cranmer sought to follow closely the themes set out by the Roman Catholic Church. By 1662, the testimony of the deaths of the children has been elaborated with an allusion to Psalm viii.

The feast itself is very old -- instituted in the fourth or fifth century. The historical details of the slaughter of the children are scant: Josephus doesn't seem to mention it at all when he compiles a list of the atrocities of Herod; perhaps it was small-fry in comparison with the list of his other crimes that aggrieved the learned Jewish historian. Nonetheless, the Comemmoration of the Holy Innocents was raised to a feast of the Double Second Class with octave by Pope Pius V in 1568. In England, the feast was historically known as Childermas.

Any loving parent will shudder and turn away from thinking about the events commemorating the execution of the savage, hate-filled orders of a paranoid king. Indeed the paintings of the classical artists depicting these events are horrible and hard to look at. Many of them depict, amid the slaughter and grief, a gleeful and ghastly picture of Herod giving out his order without a care, save only that his will be done. In reality, he will not see the event carried out, cocooned safe from culpability in his palace.

Yet how does this event affect even the soldiers themselves following the orders? Some of them are parents also, aren't they? Surely there is one soldier? One who has himself rejoiced over his tiny child recently born, sleeping soundly, squeaking a little, finding warmth and love upon the soft breast of the mother and wife. And yet the same soldier is commanded to smash his way into a small Bethlehem home with sword drawn to cut off the life of one who has barely begun to love, so that one man can sleep soundly in his bed.

Yet this happens daily. We do not like to think of it. We cast the brutality backwards in time to the excuse of a "more savage age", and in doing so we miss the slaughter of the Innocents around us.

This is not just a Pro-Life issue, though abortion is as much a slaughter of a person as is slaying a newborn. This is an issue of the death of innocence within each of us. Innocence - not nocens. The Romans would describe anything that was harmful or wicked as nocens so that one who was innocent was simply not nocens.

In Ipswich, England recently, five prostitutes have been murdered by a single killer. Yet each woman had been damaged long before that. Each woman was dependent on heroin and drugs. One was three months pregnant. Yet each woman was once a tiny squeaking baby who knew nothing but the need for warmth, love and peace. These poor women were infected with the nocenti corrupting their needs into something obscene.

Are they alone in their corruption?

No. For we tread there too in our nocenti - our needs and desires warped by the Darkness around us. No better, no worse. We are all infected.

Yet is is by way of these poor little Innocents that the infant light of Christ is protected in its vulnerability. This is a light that needs to grow and blossom despite being surrounded by the World's corrupting influences, but not being overcome by them, until this Innocent too is beaten, scourged, torn and pierced for our sake. But the light of this Innocent dies not -- a brief moment of darkness before the light burns brighter.

So it is that as the Holy Innocents hide the light in their own undefiled flesh, so too can we, with the help of their supplication, cast off the stinking corruption of our nocenti by our bathing in the blood of Christ whose birth we have celebrated three days before. This is our prayer, and, through faith in Him, it is granted.

At the time of Vatican II the RC, and in its 1979 "novus ordo" TEC both did away with the Circumcision of Christ. I can't help but think this was done on purpose to set up the liberal thinking of "Jesus our MOther", to justify women's ordination, etc. By doing away with this feast which clearly shows Christ as a male, they very cleverly set up the churches to accept apostasy.