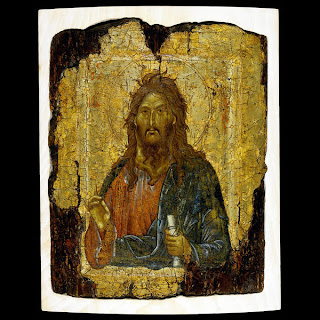 The Gospel reading for today reminds us that John the Baptist was the messenger who went before the face of the Lord to prepare the way. The words "my messenger" are the same as the name of the prophet who wrote the scripture that the Lord quoted- Malachi. It means "my messenger" or "my angel." For this reason John is pictured in iconography with the wings of an angel. Since the Gospel reminds us that John the Baptist was, in the words of the prophet Malachi, the special messenger who prepared the people to see Jesus Christ and to receive Him, it is timely to be reminded of why we have Penitential seasons; that is Advent and Lent. I believe everyone knows what goes on in New Orleans just before Lent. The Mardi Gras has become completely decadent and pornographically lewd. They have corrupted the idea into one of whooping it up right up until Lent comes, and spoils all the fun. Hardly a good way to prepare for Christ. I am glad that they don't do this before Advent as well.

Obviously, we don’t restrict Penance to just two seasons, anymore than we restrict faith in the Resurrection exclusively to the Easter season. Each season reinforces an important element of the Christian life in its fullness. Back in Maryland, before Saint Andrew’s moved into a historic and beautiful church, we had a hot water pot that boiled the water for the coffee, and, with only one room, we had to turn it on long before people came in and began to prepare for the service by praying; because otherwise they would hear the pot wailing and mourning with great lamentation and woe while the water boiled. We decided that it was a water pot for the Penitential seasons, for it wailed more forcefully than a piper’s Lament. But, it was the only water pot; so it always made its noise, and we always had to turn it on early; not just in Advent and Lent. And, like that deeply convicted water pot, we need to carry into the whole year the sober message of these seasons. And, neither, in these seasons, do we lose our joy and hope in Christ. In fact, if you paid attention to the scriptures and to the Collect, you see that the message is the message of John the Baptist; that is, to be prepared for the sudden appearance of the Lord Himself. As I pointed out two weeks ago, to be prepared to meet Christ in the final judgment, we all need to live here and now, properly prepared to receive Him in the Blessed Sacrament of His Body and Blood. So, this message of Advent, with its penance and its hope, is a year-round message, telling us to be prepared to receive Jesus Christ, Really and Truly Present among us and in us.

And, if you were paying attention to the Collect, and how it relates to the Epistle, you will see that bishops, priests and deacons are placed in His Church to be stewards of the mysteries of Christ, in order to teach His people this very thing: To be ready to meet Him. The picture of John the Baptist is used by the Church, in Advent, to remind the messengers that we too must prepare the people for the coming of the Lord, for the day when He shall appear in glory, and we shall all stand before the judgment seat of Christ.

Last year, in a sermon, I laid out before you the conditions that I set for a couple that comes to me to be married. Before I say anything else about that, let me say that my concern, my reason for saying what I said, was not out of concern for when such couples will appear; it was out of concern for you. I had heard some of you express things that alarmed me. I needed to make sure that my own congregation understands that, for us, the Times, they ain’t a’changin’. If we were interested in being politically correct affirming people, who accept everything, we could all have remained in a nice trendy church where they have abandoned moral standards; where nothing is a sin anymore (unless it violates Political Correctness); where the Hymn that ought to be sung every week is Cole Porter’s Anything Goes; where they want to marry men to men and women to women, and probably a man, at some point in the near future, to his horse. Most of us who left a certain modern trendy denomination did so for one major reason: We know that God’s word does not change; and we know that this is because He does not change His mind.

Now, what I did say was not about living arrangements; it was about sleeping arrangements. Simply put, if a couple is used to having sexual intimacy, I want them to agree to stop until after the wedding, and to confess pre-marital sex as a sin. And, before any of you think to close the door on any couple, please don’t. Let them come and talk to me. I want very much to be the voice that they have secretly longed to hear, the voice that tells them the truth that they have always known deep down inside. You let me worry about having the right words to reach them, to open their eyes, to convert them. The idea is not to slam a door in their faces; the idea is to open the right door, the Christian door. The only real way to help a couple become committed to each other, is to help them first to become committed to God. They will face temptations, and their emotional commitment to each other will be no substitute for faith in Christ and a conviction that they must live by His word.

Again, the scriptures today remind us of the messenger, John the Baptist. People do not understand John. They see his message only in negative terms. They think it terrible that he was a “hell fire and damnation” preacher (though, I need hardly point out, that the real hell fire preacher in the Bible was the Lord Jesus Christ Himself. The Baptist was mild by comparison). When John the Baptist appears in movies, he often looks and acts like a wild man, and the wardrobe department replaces the Camel’s Hair garment he wore with something that seems to have come off of Fred Flintstone.

But, if we look at the record of what really happened, as it is in each of the Four Gospels, it was John who gave the people hope. The Pharisees had no message of hope for sinners, and the Sadducees had no message of hope at all, believing that there was no life beyond the grave (which is why the Sadducees were sad, you see). Furthermore, the Pharisees seemed to think of sin in terms of social class instead of in terms of one’s relation to God. But, of course, the most important line was that of the Lord Jesus Christ, when He said to the Pharisees that the tax collectors and prostitutes would enter the kingdom of God ahead of them, because they repented at the preaching of John. People came from miles around to confess their sins and to be baptized by him, with his baptism of repentance.

You know, we do not have the most affirming message: that is, we do not have a message that says: “I’m okay, you’re okay” like a certain book from the 1970s. Anyone who leaves these services thinking he has been told how good he is, has not paid any attention to our liturgy. We do not approach God thanking Him that we are not as other men, boasting of being “good people.” Rather, “we bewail our manifold sins and wickedness, which we, from time to time, most grievously have committed.” Frankly, there is no other way to approach God.

I will tell you now, that I could not do what I do here for you if I did not, myself, from time to time, go to one of Christ’s priests, confess my own sins, and hear those words, “I absolve you…” I do not know why so many people think that confession is strictly a Roman Catholic thing- just for them. Anyone who knows the Ordinal of the Church of England must know that the priestly power to absolve, to forgive sins, has always been a very important part of Anglican practice. We never abandoned it.

Furthermore, as King David wrote, “Blessed is he whose unrighteousness is forgiven…” Confession hurts before you do it; but it brings joy to the heart after it is done. It is the most healing experience a person can have. Believe me, I know. As a priest I know what it is to be on both sides. You see, I am a sinner too; and without the ministry of the sacrament of Absolution, I would not know the joy, the freedom and lightness of the life in Christ- not lightness as in silliness, but as in liberation from a heavy weight. “Come unto Me all ye that travail and are heavy laden, and I will refresh you.” It is so.

Be prepared for the appearing of Christ Himself. “Every eye shall see Him.” This is what John was sent to prepare the people for. It is what we teach you, as stewards of the Mysteries of Christ.
Posted by Fr. Robert Hart at Saturday, December 16, 2006