Is There a Fourth Hart Brother? 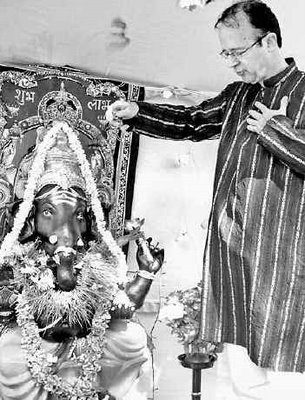 I just couldn't resist this, published in The Hindu:


THIRUVANANTHAPURAM: Meet David Hart, an Anglican priest, who recites Gayatri Mantram with the same devotion with which he celebrates the Eucharist or offers namaaz at Muslim prayer halls.

He is a "religious pluralist." His fascination for Lord Ganesha has prompted him to celebrate Vinayaka Chathurthi by consecrating an idol of Ganesha at a specially-erected podium in front of his rented house at Karumam on the outskirts of Thiruvananthapuram. Rev. Hart is an associate professor in Theology and Religious Studies at the University of Winchester in the U.K. He says his "pilgrimage to the ocean" on September 1 to immerse the idol will mark the culmination of a spiritual journey he had undertaken since his school years.

You can read it all at:

Never heard of this guy. We have no Zeppo.