The Planned Parenthood Video - A Modest Proposal for our Times 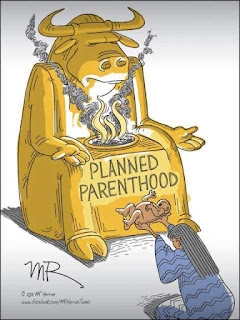 Defining "Personhood" instead of respecting the sanctity of human life, has brought only evil in history. It has provided justification for slavery (with all of the gory details), for the genocide of the American "Indians", for the Holocaust, and now for abortion and everything that goes with it. And, because "personhood" is now defined arbitrarily, a child - even a viable child - is only a person if the mother has not decided to kill it. In ancient Rome it was fathers who decided if a child was accepted or exposed. Today it is the mother. Either way, it is evil

Now we turn a new page, the harvesting of human body parts. Planned Parenthood’s top abortion doctor, Deborah Nucatola MD., was caught on a lengthy video describing how she kills unborn babies with care only for preserving organs that have some monetary value. Coldly, as if discussing something as trivial as how to cook an omelette, she described "crushing" below or above the desired organ. She also discussed in detail the marketing of those selected organs, including the price range ($30. to $100. an organ).

Within a day the defenders of Planned Parenthood, and of the whole abortion industry, accused the makers of the video, who operated undercover as part of the body parts business, of "fraud," and of "lying." They cannot deny what Dr. Nucatola said, so they claimed that the video was "heavily edited" so as to be misleading. The edited version is sufficient to know everything of importance to the story. However, one can view the entire video, all two hours, forty-one minutes and thirty-nine seconds. If you have the time, and the stomach for it, you may judge for yourself.

As for me, I am satisfied that everything is out in the open, and that no fraud has been attempted by the makers of this video. Now that the entire video is available, thanks only to those who made it, the Planned Parenthood defense that "the video is edited" becomes meaningless. The video's makers have nothing to hide. The edited version is simply to highlight the parts that are newsworthy, making it possible for busy people to see.

The ramifications
But I fear that instead of outrage and a call for justice, this noble attempt will result only in further erosion of public conscience in modern western society. Any attempted defense of Planned Parenthood is, with the whole video available, reprehensible. Nonetheless, because we live in a depraved society, it will open a new Pandora's Box, a debate that will, by its nature, give the harvesting of human parts a new status of respectability, bringing advocates of the same to the table as if their point of view is equal to its opposition in a civilized culture. So, it all gets worse. The banality of evil is the thing that progresses into more and more darkness.

Every opportunity to bring evil to light only results in that abominable progress because we live in a post-Christian society - that is, to what degree it might ever have been Christian. At least, at one time, among the public, Judeo-Christian morality had some influence; never as much as it deserved, but at least enough to create a notion, and perhaps semblance, of civilization. Such is no longer the case.

You may be sure that the Religious Left, led by the Episcopal "Church," along with the Presbyterian "Church" of the United States and others, will be on the side of Planned Parenthood. The appeal, as always, will be strictly to the emotions, with such attempts at justification as the religious imagination may cook up. Once again, they will tell us of some Jesus who would approve; no, not the One we know, but the false kind that St. Paul warned of (II Corinthians 11:4). We will be given excuses about the good that this harvesting does for medical research. The end result will be to review the morality, and then legality, of "Partial Birth Abortion," in which a child, all the way up until the moment of birth, may be extracted partially from the womb, and stabbed in the neck to die.

Dr. Nucatola described Partial Birth Abortion while explaining the current practice of Planned Parenthood (incriminating herself specifically). She spoke of turning the baby around in a breech position to come out feet first. At this time Partial Birth Abortion is illegal. This was fought by the most extreme abortion supporters, including the so-called National Organization of Women (NOW - never elected by any majority of women to represent them). They not only argued for Partial Birth Abortion; they even held ceremonies to honor specific doctors who were so "brave" and "humane" as to perform them in states where they were allowed.

That practice raised an obvious question, especially with medical science making viability outside the womb possible at earlier stages than ever before: If ever there were some supposed medical justification for a late term "termination of pregnancy," since the baby is viable outside the womb, what medical purpose does it serve to kill the baby? Simple. The baby's mother wants it dead, and has contracted for the killing, or "hit" as the Mafia calls it.

You see, it was never about medicine. None of it ever has been. It always has been about that allusive quality called "personhood," and to whom we may deny the category this time.
Posted by Fr. Robert Hart at Friday, July 17, 2015

This like all such arguments is about having your cake and eating it too. It is all about enforcing death on demand governed by a cruel double standard.