"Charity...rejoiceth not in iniquity, but rejoiceth in the truth." I Corinthians 13:4,6 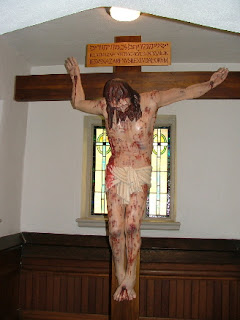 June 26, 2015 will live on in infamy. Within minutes of the Supreme Court issuing the most arbitrary ruling since Roe vs. Wade, namely Obergfell vs. Hodges, by which it created a national "Constitutional Right" to same-sex "marriage," President Obama tweeted the words, "Love Wins." During that time the Episcopal Church held its General Convention in Utah. it included a service described as follows:

Lesbian, Gay, Bisexual and Transgender (LGBT) Episcopalians marked 40 years of advocacy in the Episcopal Church during a Monday night Eucharist characterized by inclusive language, liturgical innovations and prayers for “disordering our boundaries and releasing our desires."  Hundreds of Episcopalians at the denomination’s triennial General Convention in Salt Lake City, Utah participated in a festive Eucharist hosted by Integrity USA, the church’s unofficial LGBT caucus. The event took place the same day that bishops gave approval to a new gender-neutral marriage rite which appears likely to be enacted by the end of the week. (Juicy Ecumenism, June 30, 2015)

Present was Louie Crew, longtime advocate of homosexual and lesbian activism in the Episcopal Church, receiving praise as a "prophet" and, apparently, worship as a god:

“And now a word from the Prophet Louie,” a prayer leader introduced, beginning a video on the life of Crew. Following the video, the congregation was led in singing “Louie, Louie, Louie Hallelujah.”

The Episcopalians are not alone among mainline denominations in the United States, accepting and advocating not only "Gay" activism, but also what they have been calling "Marriage Equality" for several years, namely same-sex "marriage." It has been given the status of a Civil Rights issue by its supporters, which serves only to make a mockery of genuine Civil Rights, for which several people were jailed, beaten, fire-hosed, and murdered during my childhood years, concerning which we saw just about nothing on television news back then. Those issues were about a real need for justice, engaging the opposition of evil violent men, including the Ku Klux Klan. In the twenty-first century, for homosexuals and lesbians to demand some "right" to same-sex "marriage," as if it were on the same level as the true Civil Rights struggle, insults our intelligence. For mainline denominations, such as the Episcopal Church, to be part of the LGBT scene, requires some kind of religious rationale.

That is where the religious Left are on board with President Obama and many people on the secular Left; to try and give the whole idea some spiritual meaning, they use the word "Love." It works in English, but would not work in the Koine' Greek of the original New Testament. By love they mean eros, and nothing more, that word from which we get the English word "erotic." "Love" in that limited carnal sense cannot mean the same thing as Phileo and Agape one meaning brotherly love and the other Divine love. Agape was translated into Latin as Caritas, the root word for the English "Charity."

It is good that the King James Bible, in I Corinthians 13 uses the word "charity," because it means love in a specific, in this case Divine, sense. In English one may say, "I love a big juicy steak." One cannot say, "I have charity for a big juicy steak." Sadly, to people in modern English speaking society, the word "Love" covers any relationship that leads, it would seem, to an orgasm. Indeed, the Episcopalians have stated quite accurately that there has been a "disordering [of] our boundaries, and releasing [of] our desires."

In their blasphemous "Eucharist" in Salt lake City, the Episcopalians also celebrated an attack on the family as the basic unit in society, and as created and ordained by God through nature.

“We got to this place of redefining marriage by redefining two other words: home and family,” ["Bishop" Suffragan Mary] Glasspool declared in her sermon.

Clearly, in the "thinking" of such people, a purely emotional appeal either to guilt or ignorance, or both, takes the place of theology. It cancels out God's revelation as known and understood for millennia, as taught by Christ and His Apostles and known to the Church since the beginning. Their use of the word "love" is empty of anything and everything to do with Christ and His cross. Saint Paul wrote:

"For when we were yet without strength, in due time Christ died for the ungodly. For scarcely for a righteous man will one die: yet peradventure for a good man some would even dare to die. But God commendeth his love toward us, in that, while we were yet sinners, Christ died for us (Romans 5:6-8)."

The Love of God must be spoken of and understood in the context of Christ crucified. On the cross we see something terribly ugly, so much so that "We hid as it were our faces from Him (Isaiah 53:3)." The sight of the man of sorrows broken, bruised, and bleeding is the very sight of God's judgment on our sin. It is also the historical event in which the love of God has been manifested most clearly for all to see. The sight of God's love is not a smiley face, and would never fit into one of those "Precious Moments" Bibles (with pictures so "sweet" that they might cause diabetes and tooth decay). It is not a new approval of human sin, but judgment on sin. It is not acceptance nor affirmation of sin, but it is the forgiveness of all sins for those who repent and believe. It is where the blood was shed for the remission of sins (Hebrews 9:22).

To use the word "love" in a distorted way is to preach a false gospel of a false Jesus, with the empowering of a false spirit (see II Corinthians chapter 11). Such a false Jesus is now the new "Jesus" of former President Jimmy Carter, as he said on July 7:

Why would any believer speak of what Jesus would approve? The Jesus Christ in whom we believe already told us His standards.

Think not that I am come to destroy the law, or the prophets: I am not come to destroy, but to fulfil. For verily I say unto you, Till heaven and earth pass, one jot or one tittle shall in no wise pass from the law, till all be fulfilled (Matthew 5:17,18).

And he said, That which cometh out of the man, that defileth the man. For from within, out of the heart of men, proceed evil thoughts, adulteries, fornications, murders, Thefts, covetousness, wickedness, deceit, lasciviousness, an evil eye, blasphemy, pride, foolishness: All these evil things come from within, and defile the man
(Mark 7:20-23).

A big lie often buzzing around the internet is that "Jesus said nothing about homosexuality." The Jesus we see in the Gospels has nothing good to say about fornication. The English word can be misleading, because it is often understood in a limited way. But the word in the Greek New Testament is porneia (πορνεία), from which we get not only the word "fornication," but also the word "pornography." It does not mean merely heterosexual intercourse before or outside of marriage. It means every kind of sexual immorality, including adultery, homosexual acts, sexual acts with children, sexual acts with animals, etc. This new and different Jesus that former President Carter believes in is a fraud. He is not our Risen lord Jesus Christ Who "came into the world to save sinners (I Timothy 1:15)."

That's right. He came to save sinners, indeed "to save His people from their sins (Matthew 1: 21)." Not in their sins, but from their sins. Jesus Christ came into the world for that, not to make the world safe for porneia. His coming was not to wink at immorality, and give His okay on carnality. Those who are now teaching that He did, or "would" are false prophets, for a Jesus who "would" do this or that, rather than the real Jesus Who did speak very clearly, is a false Jesus indeed, one who can be controlled by sinful imaginations.

What would you say of a doctor who, seeing that you have brought yourself to a fatal condition that will end your life in six months max, failed to tell you his diagnosis, and that you could live a long and healthy life by changing your habits immediately? We would consider him most unprofessional to say the least, unethical to say more, and criminal to say much more. But, what if he failed to tell you how to save your life because, in his words, to deprive you of temporary pleasures just wouldn't be loving? What judgment awaits clergy who fail to preach repentance, because of "love?"

The new liturgical declaration of Episcopalians in the Salt Lake City General Convention is utterly Satanic. A modern pagan religion, "The Law of Thelema," invented by Aleister Crowley, an English magician, in the 1900s, declares, "Do what thou wilt shall be the whole of the Law. Love is the law, love under will." This was taken also by modern Satanism in 1966, and promoted by Anton Szandor LaVey, founder of the "Church of Satan." That is the same mentality that the LGBT supporting Episcopalians were expressing in their new liturgy: "Disordering our boundaries and releasing our desires."

Against that spirit and mind stands the Cross of Christ, demonstrating God's judgment on sin while saving sinners because of Divine love - the real love.