Romans 8:12-17 * Matthew 7:15-21
Beware of false prophets, which come to you in sheep's clothing, but inwardly they are ravening wolves 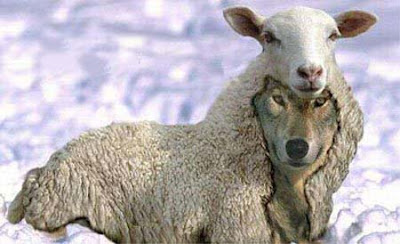 One of the finest images ever presented in a sermon that I was privileged to hear, was the simple image of drinking seawater. If survivors from a sinking ship are together in a lifeboat, no matter how thirsty they may be, the worst thing they can do is to drink seawater. The salt in each drink adds to thirst, rather than quenching it. Eventually they go mad before dying of dehydration. Each drink adding to the thirst, rather than quenching it, is a good image of addiction; but, at the end of the day it is a picture not only of addictions, but of all sins of the flesh. Each time the flesh is indulged it craves more: "Hell and destruction are never full; so the eyes of man are never satisfied." (Prov. 27:20) Do not drink seawater, and do not try to satisfy lust.
"Brethren, we are debtors, not to the flesh, to live after the flesh. For if ye live after the flesh, ye shall die: but if ye through the Spirit do mortify the deeds of the body, ye shall live," says today's Epistle. Looking back at the last two weeks, you may recall that this portion of the Epistle to the Church in began with the reality of your new life given to you in the waters of baptism. And, in sharp contradiction to modern heresy taught by that other denomination (the one that embarrasses even the atheists), Baptism is not a license to sin, but the sacrament whereby you have died to sin and come alive with the Risen Lord Jesus Christ.

To drink of the Spirit of life in Christ is to find satisfaction that the seawater of sin cannot give. To walk in the Spirit rather than the flesh is to know God "whose service is perfect freedom." To let go the weight of sin, to cut yourself loose from the burden, is the great joy of freedom. It may hurt. Repentance may hurt so badly at first that our Lord compares it to plucking out an eye or cutting off a hand. He is not unaware of the pain it may involve to repent of some sins. He is not unaware of the pain some may feel even as they let go of bitterness and decide to forgive. He is not unaware of the agonies of "cold turkey," whether from real addiction, or from lusts of the eyes and of the flesh, or even "cold turkey" from a wrong romance outside of marriage. The Lord knows that some repentance hurts at first; but afterward it brings peace. Beside which, these sober words must be heard and taken to heart: "for it is profitable for thee that one of thy members should perish, and not that thy whole body should be cast into Hell." (Matt. 5:29, 30)
These are things that the false prophets will not say to you. The Lord warns of them, coming in sheep's clothing, looking so very holy and good; but inwardly, he warns us, they are ravening wolves. They court your favor. They do not preach that we should repent and forsake our sins; they aid you only in deadly self-deception, just as enablers help addicts destroy themselves. And, they add to the deceptions and errors of modern society by presenting an image of God who has made no commandments, and who approves of sin, and so needs to forgive nothing.
As the Prophet Jeremiah wrote:
“Thus saith the LORD of hosts, Hearken not unto the words of the prophets that prophesy unto you: they make you vain: they speak a vision of their own heart, and not out of the mouth of the LORD. They say still unto them that despise me, The LORD hath said, Ye shall have peace; and they say unto every one that walketh after the imagination of his own heart, No evil shall come upon you. For who hath stood in the counsel of the LORD, and hath perceived and heard his word? who hath marked his word, and heard it? Behold, a whirlwind of the LORD is gone forth in fury, even a grievous whirlwind: it shall fall grievously upon the head of the wicked. The anger of the LORD shall not return, until he have executed, and till he have performed the thoughts of his heart: in the latter days ye shall consider it perfectly. I have not sent these prophets, yet they ran: I have not spoken to them, yet they prophesied. But if they had stood in my counsel, and had caused my people to hear my words, then they should have turned them from their evil way, and from the evil of their doings (Jer 23:16-22).”

I read of a startling statistic in The Washington Times in 2009: A full 40 percent of all children born in this country are born out of wedlock, up from 25 percent four years before that. Have we really come to a time when people are so unconcerned about their children that they make no effort to provide stable homes and family life? Yes, we have. And, why not? Children are treated as throw-away objects while they are vulnerable and helpless, still growing in the womb, having no protection of law. This is a sin of our whole country. And, marriage is treated as an experiment, and something that may be redefined by the stroke of legislator's pens and the whims of their votes; as if marriage were man-made rather than ordained of God; and, as if human nature can and should be altered. Indeed, for forty years extreme feminists (both male and female feminists, since many men hold that ideology too) have told us that God made some big mistakes in creating human nature the way He did, and it is their crusade to change it, or destroy it trying to change it. Therefore, innocent children are offered in sacrifice to their god of convenience and egalitarianism, and marriage is offered in sacrifice with the innocents. People in our time increasingly display not only ignorance of the moral Laws of God, but increasingly they display their inability to comprehend morality at all. Sadly, churches are simply going along to get along, and often fail to teach their people what they need to know in order to live. They let them drink the seawater, and make little or no effort to guide them to the water that Christ alone gives; that alone satisfies thirst.
Yes, these are the things the false prophets will not tell you. They preach a different gospel, not heeding the warning of :

I marvel that ye are so soon removed from him that called you into the grace of Christ unto another gospel: Which is not another; but there be some that trouble you, and would pervert the gospel of Christ. But though we, or an angel from heaven, preach any other gospel unto you than that which we have preached unto you, let him be accursed. As we said before, so say I now again, If any man preach any other gospel unto you than that ye have received, let him be accursed. For do I now persuade men, or God? or do I seek to please men? for if I yet pleased men, I should not be the servant of Christ. (Gal.1:6-10)

That alarming statistic, that forty percent of American children are born out of wedlock, reveals the failure of the clergy above every other group in modern society. I have come to see that a clergyman may be a false prophet without ever teaching error overtly. All he needs to do, to present another gospel, is to so court your favor that he becomes one who pleases men, and cannot, therefore, be a servant of Christ. In an Anglican context, such a man may enter a pulpit with the intention of watering down the power and the wholesome effect of the Scriptures that are read, and of the Biblical truth that sounds clearly as a trumpet throughout the whole liturgy of Holy Communion. He need merely make it go down, as the song from Mary Poppins says, with "a spoonful of sugar."
I have advised men who study for Holy Orders as follows:

"It is not the duty of the clergy to blunt the sharpness, to soften the hammer, or to quench the fire. Woe to the preacher who protects the people from the word that kills, because he protects them also from being made alive- truly and forever alive. Woe to the preacher who acts as a buffer, deflecting the force of the scriptures to soften the blow, because in protecting from the stroke, he prevents the healing. If his labors in the pulpit amount to a lifetime of standing between the people and the word of God, reducing its effect, taming it and making it polite, presentable and harmless, he will have nothing to show for it in the end but wood, hay and stubble instead of gold, silver and precious stones.
"It far easier to preach if a man (informed by the Tradition of the Church) will ride the scriptures like a wave, letting them make their own point, and arrive at their own destination. If the passages that have been read speak of life and death, then elaborate on life and death. If they speak of repentance then preach that men should repent. When they encourage faith, proclaim faith. When they warn of Hell and the judgment to come, then blow the trumpet as a faithful watchman on the walls. When they comfort, speak as a pastor who feeds the sheep. Let the meaning of the scriptures be expounded to their full effect, proclaiming from them the truth that affects the eternal destiny of the souls in your care."


The reality is this: The message is the same as always. Repent and believe the Gospel. And, the Gospel is the same Gospel that was preached by the Apostles and that has been taught and "believed always, everywhere and by all." Jesus Christ died for our sins, was buried and rose again the third day as the scriptures foretold. After his resurrection he was seen by many witnesses. To be saved from sin and death you must repent of your sins and believe this Gospel. Some churches have a new message. We preach the old one, the one that came from the Living God.
Posted by Fr. Robert Hart at Saturday, August 09, 2014

Good one here. We need to hear this over and over, it seems.

Great post! I tire also of Anglican "homilettes" that have to be 5 minutes and under. The old Divines could preach for an hour (just read their semons!) as well as the Fathers. There is nothing "low church" about preaching the whole counsel of God, or "puritan" even. It's the Shepherd's duty to be a student of sacred scripture. The Eucharist is the summit of worship, but you have to get the sheep ready for that journey. I can't tell you how many times I've heard, "I'm called to celebrate the Mass ..." If you preach a false or muted Gospel, what good is the Mass if you are grooming your audience to be Pelagians or Judaizers?