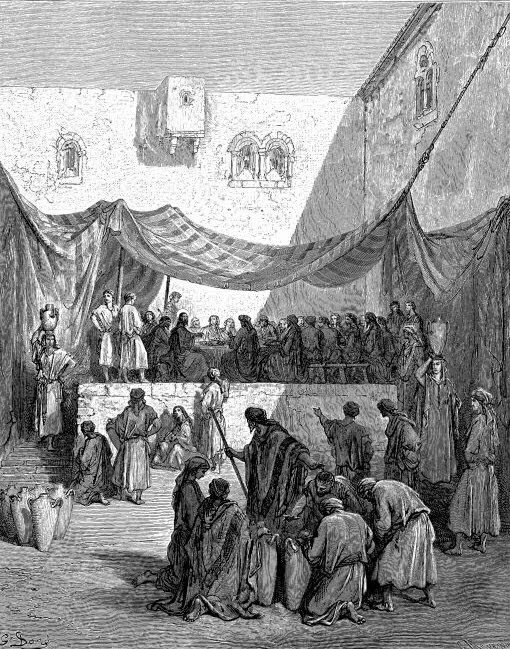 Today we will look at three important things meant to be drawn out, exegeted, from this portion of the Gospel of John. These are:

The mysterion of matrimony
First, let us consider His presence at a wedding. We know that the Lord is present in a very special way whenever a couple performs the sacrament of marrying each other with the blessing of the Church. Saint Paul calls the marriage union the “mystery” of Christ and His Church, and by the use of the word “mystery” (μυστήριον, mystērion) the scriptures tell us that this is a sacrament. We know that a sacrament conveys the grace of God, each according to His plan and purpose, a special and specific grace. The grace of the marital union is specific and has everything to do with our hope for a future and for new life.

We can say, with both scripture and reason on our side, that the Lord is not present in any meaningful way in unions outside of marriage. Certainly, they lack the grace of the sacrament, and even among non-Christians they are not conformable to God's laws. They have instead the nature of sin. But, in our time such non-marital unions are treated as acceptable by society. This is an area where the Church has no right and no authority to take the side of popular “culture.” We must be different. Whatever the world is teaching and doing, Christian parents, remember: You must teach your children to wait until marriage. The problem is, people treat the ultimate human relationship, the kind that alone brings forth new life, as a casual thing, and as something to be subject to experimentation. They experiment by living as if they were married; and when such a couple decides that it is finally safe to get married, they have become accustomed to the idea of the experiment; and that idea never goes away.

No wonder that such couples have a high divorce rate, as, indeed, the statistics show. They failed to learn certain important facts. First of all, marriage is not an experiment, but a commitment. Second, any human relationship that is experimental must fail at some time, because everybody is impossible to live with. If you do not consider yourself impossible to live with, than read the Epistle to the Romans and take note of Saint Paul’s description of what a sinner you are, and wise up. Finally, marriage is not simply a commitment two people make to each other, but a commitment that one man and one woman make to God, with faith that He is making the same commitment to them, and that (in the words from Ecclesiastes) “a threefold cord is not easily broken.” For the occasion of joy, when a couple begins to live in the sacrament of matrimony, the Lord is present.

We must base our understanding of marriage on what God has revealed. It is not between two people of the same sex, but only between one man and one woman. Nothing else is marriage. And, outside of marriage, sexual relations are strictly forbidden. If you disagree because of the spirit of the age, or of the world, then your argument is not with me; it is with God.*

Christ's "Hour"
“Jesus saith unto her, Woman, what have I to do with thee? mine hour is not yet come.”

The way this sounds to modern ears, ‘What have I to do with thee?’ is a bit misleading. The way to understand it is simply, “what is there to be done between you and Me?” That is, what did the two of them have as a matter of mutual concern?

For this second point, I am grateful for a book by one of the genuine lights of the Roman Catholic Church here in America in the 20th Century, Archbishop Fulton J. Sheen. His commentary on this part of the Gospel of John, in his classic book that came out in 1961, Life of Christ, highlights one simple phrase and draws out the meaning with clarity. What did our Lord mean by “Mine hour is not yet come,” that enigmatic line He spoke to His mother? In the other places in the Gospel of John that speak specifically of His hour, the meaning has to do with His cross, the time of His death.

“Then they sought to take him: but no man laid hands on him, because his hour was not yet come.” John 7:30

“These words spake Jesus in the treasury, as he taught in the temple: and no man laid hands on him; for his hour was not yet come.” John 8:20

“And Jesus answered them, saying, The hour is come, that the Son of man should be glorified…Now is my soul troubled; and what shall I say? Father, save me from this hour: but for this cause came I unto this hour.” John 12:23, 27

“Behold, the hour cometh, yea, is now come, that ye shall be scattered, every man to his own, and shall leave me alone: and yet I am not alone, because the Father is with me.”
John 16:32

And with the cross His hour speaks of His resurrection and glorification:

“These words spake Jesus, and lifted up his eyes to heaven, and said, Father, the hour is come; glorify thy Son, that thy Son also may glorify thee.” John 17:1

Here is how Archbishop Sheen put it:

“The ‘Hour,’ therefore, referred to His glorification through His Crucifixion, Resurrection and Ascension…His mother was asking for a miracle; He was implying that a miracle worked as a sign of His Divinity would be the beginning of His Death. The moment He showed Himself before men as the Son of God, He would draw down upon Himself their hatred, for evil can tolerate mediocrity, but not supreme goodness. The miracle she was asking for would be unmistakably related to His Redemption.” P.77

Mary knew full well the prediction that Simeon had made to her years before, as recorded in the Gospel of Luke: “A sword shall pierce thine own soul also.” The pain of the cross awaited her too, for her ordeal was to watch her Son die in shame and agony while His enemies rejoiced and delighted in His sufferings as entertainment, amusement and a kind of victory. Knowing that He was going to begin to take the path that would lead to the cross, she speaks her last line that was recorded in scripture: “Whatsoever he saith unto you, do it.”

Here we see the same willingness on her part that was expressed years earlier at the Annunciation: “Behold the handmaid of the Lord. Be it unto me according to thy word.”
As Archbishop Sheen wrote:

“He was telling His mother that she was virtually pronouncing a sentence of death over Him. Few are the mothers who send their sons to battlefields; but here was one who was actually hastening the hour of her son’s mortal conflict with the forces of evil.” P. 78

Here we see, as well, how the Lord took up the work of His cross willingly. Years later, in the garden of Gethsemane, the most significant words that he spoke to the Father were, “nevertheless, not My will, but Thine be done.”

The seed of the woman
Finally, what of this curious title that he gives to His mother? Here at Cana, as He works that first miracle that would lead to His being “despised and rejected of men, a man of sorrows and acquainted with grief… cut off out of the land of the living” “for the sins of the whole world,” He calls her “Woman.” One more time He would call her that. On the day of His death as she stood by helplessly, with the sword piercing her own soul, He said: “Woman, behold thy Son.”

Perhaps to the modern American ear this has no meaning. But, to the ancient Jews, educated in the scriptures, it was obvious, indeed it was rich in meaning. This comes from the Proto Evangelium, the first announcement of the Gospel. In the third chapter of the Book of Genesis, after the fall of Adam into the sin and death that passed to all mankind, God spoke to the serpent the words of his coming defeat:

“And the LORD God said unto the serpent, Because thou hast done this, thou art cursed above all cattle, and above every beast of the field; upon thy belly shalt thou go, and dust shalt thou eat all the days of thy life: And I will put enmity between thee and the woman, and between thy seed and her seed; it shall bruise thy head, and thou shalt bruise his heel.” Gen. 3:14, 15

The Lord Jesus identified Himself as the “seed of the woman.” His heel was bruised, that is He died, but He could not be held by death; and so He rose on the third day. The serpent’s head was bruised, that is, the prince of this world was cast out in the judgment that was rendered, by the Lord’s cross, on the world’s system of sin. The entire dominion of Satan was destroyed by the cross of Christ, the entire oppressive usurpation of rebellion against the Maker and Ruler of all things, destroyed like the armies of Pharaoh, so that we might be set free from slavery to sin and death. The Lord's heel was bruised for our sake, and the power of Satan was overthrown. Sin was killed by the cross, and death was slain by His resurrection.

The paradoxical use of the word "seed," (זֶרַע, zera`) that is, the woman’s seed, is to express a miracle, that a woman would conceive without a natural father. He, the Son of the virgin mother, is the seed of the woman, spoken of by God in the first promise ever revealed that He would save us from sin and death; for he does not damn Adam and Eve in the third chapter of Genesis; instead He makes this promise. So, in the Gospel, Mary is not simply any woman, but rather she is the Woman, because Jesus Christ is the Savior of the world.