We have two ways to approach today’s Gospel reading, and I believe they are so interrelated that I should talk about both of them. One is the clear revelation of the Trinity when Jesus was baptized, and the other is the meaning of Christ’s baptism as it relates to our salvation. As I said, however, these are interrelated, not separate subjects. They are separate sub-headings at most. 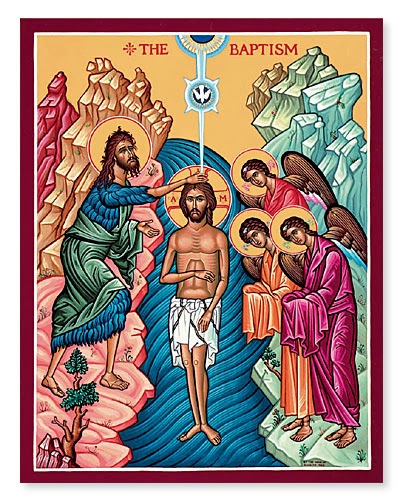 The Son stands in the water, the Spirit appears in form as of a dove and lights upon Him, and the Father’s voice comes from above. This clear revelation of God is why we should think of today as a companion Sunday to Trinity Sunday. It is why the Orthodox Church sees this scene from the Gospels as the most significant Theophany, for which they name this season.


The revelation of the Father and the Son and the Holy Ghost, the Trinity, is a necessary part of our salvation. It is not about abstract and difficult theology, but about how God, who is Love, saves us from sin and death through the cross of His Son, and promises to raise us up in His Son just as He rose from the dead. God has made Himself known in our world- not perfectly understood, but known. What was revealed that day at the River Jordan was a revelation to every human being except Jesus, who alone already knew.
Posted by Fr. Robert Hart at Saturday, January 18, 2014