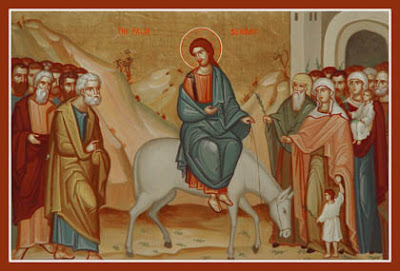 We enter into the drama of the Gospel this week. No more powerful expression of the feeling of this week has ever been produced than the opening chorus of Bach’s St. Matthew Passion. The very sound of it evokes deep emotion, as music paints a picture of something beyond suffering. It is the willingness of love to embrace suffering, to own it, and in so doing to give the great gift of charity. It is our sorrow at Christ’s pain and death, but a sorrow of gratitude producing in us the love we could not have without His sorrow, His gift to us. The heart of the drama, as Bach put it into music, as Grunewold painted it, and as countless poets have hymned it, is not the drama of a tragic figure whose life is wrongly taken in a Kafkaesque trial, a mockery of justice. It is the drama of the One Who loved us unto death, and gave that life which no man could take from Him.

Hear the words Christ had spoken a while before ascending to Jerusalem:


Remember, as we will read on Friday the Gospel of John, that when they came to arrest Him, they all fell backward, and could not stand up until He spoke again and allowed them to do so. And, as St. Matthew tells us, He spoke these words to Peter:

"Put up thy sword into his place...thinkest thou that I cannot now pray to My Father, and He shall presently give Me more than twelve legions of angels? But how then shall the scriptures be fulfilled, that thus it must be (Mat. 26: 53, 54)?"


The One Who prayed in the Garden, "Not as I will, but as Thou wilt" and said "greater love hath no man than this, that a man lay down His life for His friends" would show greater love than is possible for human strength, as He would die for His friends and His enemies. "God commendeth His love toward us, in that, while we were yet sinners, Christ died for us (Rom. 5:8)." He set His face as a flint; His face was set toward Jerusalem. No man could make Him go there; no man could send Him to the cross.

So our consciences are stricken, and our hearts afflicted, by something more profound than guilt; we are brought low, and moved, by this true drama, to gratitude, to give thanks with tears, moved to love, all of which restores to us hope, and faith, and charity for all. Our consciences are cleansed by His death, and made new. They are made active; they stir to holy living. No longer is our life a matter of rules for the sake of rules, laws for the sake of laws. The Law is written on our hearts by the Holy Ghost along with the deepest recognition that we could not give enough thanks to our Redeemer had we a thousand tongues to sing, and that we will never stop giving thanks for eternity, unto ages of ages, or world without end. It is now personal. "We love Him because He first loved us."

We are moved beyond the power of words to tell, not because the cross of Christ makes us guilty in forcing Him to bear our sins; but, rather, because the cross removes our guilt, we are moved to gratitude and to love. It is because He "bore our sins in His own body on the Tree (I Peter 2:24)." "He was numbered with the transgressors, and He bare the sin of the many, and made intercession for the transgressors (Isa. 53: 12)." This was the Divine plan, about which we had no say, in which we had no input. Like life itself, it is the free gift of the Triune God to creatures dependent upon His grace, grace to live, and now grace to be restored to His favor. Think upon the words we have read from that famous passage of St. Paul to the Philippians, that He "was obedient unto death, even the death of the cross."

What can that mean if not that the death of the cross was the Divine plan? This is a profound mystery. We can understand the principle that the death of the One Who was without sin, Who never deserved the wages of sin, reverses death and brings eternal life. That His death is, therefore, the sacrifice offered to God by the Righteous One of Himself for all sinners is plain enough as a theological principle, and is itself demonstration of the love of God for the fallen children of Adam. But, the death of the cross, the death of severe pain and humiliation, involving the worst physical suffering man can feel, coupled with all of the shame and torment of cruel mocking and scourging. Why was this the Divine plan? What does each stripe mean? What means the piercing of thorns and nails, the contempt and anger, the beating over the head with a reed? Why the derision of heartless enemies added to the pain of crucifixion? What is all of this about?


The answer, as is written in the First Epistle of Saint Peter, is that He “bore our sins in His own body on the tree.” We are proud, are we not, of our minds? Can we not out think all creatures on earth? But, how does God view the vain and selfish use of our minds? He crowns our proud intellects with thorns. We are proud, are we not, of the work of our hands? Have we not made things greater than the Tower of Babel itself? But, what thinks the righteous God of the selfishness with which we labor? Our hands deserve the piercing of nails. We are proud, are we not, of how we walk before God and men? We suppose that we are not like other men, and are just humble enough to render proud thanks as we pray thus to ourselves, "God, I thank thee." But, in the eyes of God our own standard of righteousness tends to self-flattery. What says He of our walk, but that nails should be driven through our feet?


But, I think I only scratch the surface of this mystery. Certainly, nothing that happened to the Son of God was an accident. He allowed it all, so it all has meaning, and the mystery is more profound than I can say, of what it means that "He bore our sins in His own body on the tree." The cross shows us the Divine sentence upon our sins, and yet, remember, that we had no power to crucify Him.

On this Palm Sunday, let us look at the determination with which He fulfilled His mission. Nothing could keep Him from the purpose for which He came as a Man, and took upon Himself our nature. In the movie The Passion of the Christ, the "bad" thief, the one who does not fear God even while dying, is filled with anger at the sight of the Lord embracing His cross. "Fool!" he yells, "Why do you embrace your cross?!" Christ entered Jerusalem, unmoved by the praise of the crowds, for He had not come to be their King, not yet. He had come to be priest and sacrifice. The great drama of this coming week, the drama Bach expressed so powerfully through music, the drama we feel this day, and which will break our hearts on Thursday night and Friday, is the drama of His love, which produces our love, our thanks; and that afflicts our hearts with both pain and comfort at once. We, though undeserving, are loved.
Posted by Fr. Robert Hart at Saturday, March 23, 2013