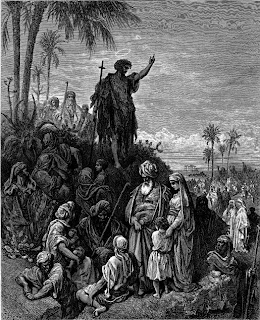 Again we are given that mysterious image of John the Baptist, the burning and shining light who bore witness by his life and death to Jesus Christ. “He must increase, and I must decrease,” said this prophet, this man whose unique vocation was that he bridged the Old Testament and the New. Two weeks ago we saw that all of the scriptures bore witness to Jesus Christ; and now, this last prophet of the Old Covenant bears direct witness to Christ, baptizing Him, and seeing the Spirit of God come upon Him as a dove out of Heaven. This last prophet of the Old Covenant is the first prophet of the New Covenant. The Lord said through the prophet Isaiah, “Behold, I will do a new thing; now it shall spring forth; shall ye not know it? I will even make a way in the wilderness, and rivers in the desert (Isa. 43: 19).” God called this prophet, this unique prophet, to show that the new thing, the New Covenant spoken of by Jeremiah the prophet (Jer. 31:31f) was upon them. John’s father was a priest under the Law of Moses, a descendent of Aaron. Therefore, John was also, by that Law, a priest. Yet, John the son of Zechariah, went into the desert to be the voice of one crying in the wilderness, “prepare the way of the Lord.”

Advent is about the last things, and especially meant to remind us that Christ will come again in glory to judge the quick and the dead, to make the heavens and the earth new, and to rule forever on His throne, surrounded by saints whom He has redeemed from sin and death to rule forever with Him. But, as we have seen, instead of having us read the many passages of scripture that deal very directly with eschatology- the study of the end- the Gospel readings appointed by the Church give us a glimpse of Christ’s second coming by reminding us of events that happened when He came at first. The first week we saw that His kingdom brings judgment on the very House of God in the midst of the holy city, and cleanses it by driving out those who defiled it by their willful sin, cheating the people on holy ground. The picture ought to inspire the healthy fear of God, and to make us repentant and resolute to live in such a way that we will be among those who remain in His house forever, instead of being driven out to spend eternity in outer darkness, where there will be weeping and gnashing of teeth.

And now, thanks to the wisdom of the Church, we are reminded of the Baptist who prepared the way of the Lord by preaching repentance and cleansing. John the Baptist bridged the Testaments and prepared the way for Christ by offering hope, by giving sinful people a chance to start over again. The sinners who came to him were given a new beginning, hope and cleansing- themselves cleansed rather than tossed out as the Lord tossed out the money changers when it was the temple that He cleansed. In other words, the vocation of John the Baptist was to prepare people to see Jesus as the Messiah, and the preparation was repentance, the only way to be prepared to meet the Lord. The Advent message of repentance is necessary. Modern popular religion tells everyone that they need not repent of their sins, but rather that everyone is accepted with all of their ungodly baggage. The truth is, some churches are simply helping people go to Hell, due to the false teaching of Satan’s ministers. The truth is, the real ministry of the Church is the most important and serious thing in the world. Here we deal with things more important than mere life and death. We speak and administer the word and sacraments that have to do with eternal destiny. We give out both a warning and hope: "Repent, for the Kingdom of Heaven is at hand."

Now, about the comings of Jesus Christ, and the life of this mysterious John the Baptist, we should dig a little deeper. The word “Christ” is from the Greek for the Hebrew word Meshiach, or as we pronounce it in English, “Messiah.” We have come to call the Lord by two names more than all others, Jesus and Christ. The one means Salvation- Y’shua. The other means “the anointed” – Meshiach. The implication is the Old Testament expression, “the Lord’s Anointed.” This comes with two pictures, as the word "messiah" is sprinkled generously throughout the pages of the Old Testament. The word speaks of priests and kings, and the anointing comes by the hand of a prophet.

The first men to be called meshiach were the brother of Moses, Aaron the High Priest, and his sons the priests. The King James Bible uses the phrase “the priest that is anointed.” The original Hebrew is h’ kohan h’ meshiach- “the priest the messiah.” The second class of men to be called messiah (meshiach) are the kings. David would not stretch forth his hand against Saul, because he was “the Lord’s anointed.” That is, the Lord’s messiah. Every priest was a messiah, and every king was a messiah. And, yet, the scriptures clearly speak of the one Man who would be both priest and king, and who would be the only hope of the whole world, H’ Meshiach- The Messiah. So, first Messiah is the priest, and then after that He is the King.

Jesus Christ’s two comings are foreshadowed in these pictures. First he came as priest. The Epistle to the Hebrews is the most explicit New Testament book that tells of Christ’s priestly ministry when he came the first time, and does so in light of the hope of those who look for His second appearing. As the priest He offered Himself as the sacrifice. The Book of Leviticus tells us clearly how a priest made kippur, that is atonement, for a repentant sinner who confessed his sin to the priest and brought a sacrifice. The real meaning is that the priest himself is the atonement, and offers the animal because he cannot sacrifice himself. This is a type and shadow of Jesus, who did offer Himself as priest and sacrifice when He came the first time. The importance of the Suffering Servant passage to the clear New Testament proclamation of atonement cannot be overstated. You will find it in the 53rd chapter of the Book of Isaiah. “But he was wounded for our transgressions, he was bruised for our iniquities: the chastisement of our peace was upon him; and with his stripes we are healed. All we like sheep have gone astray; we have turned every one to his own way; and the LORD hath laid on him the iniquity of us all.”

This Suffering servant, after His death in their place, rises and takes up a ministry of intercession for sinners. “When thou shalt make his soul an offering for sin, he shall see his seed, he shall prolong his days, and the will of the LORD shall prosper in his hand.” A dead man cannot prolong his days unless he rises again. In this passage, His death and resurrection are priestly, because he dies as the one true sacrifice, the atonement, and after rising “he ever lives to make intercession for them,” that is, for those who come to God through Him (Hebrews 7:25). The Old Testament sacrifices on those altars foreshadowed His true sacrifice, just as our sacrifice on this altar, in which nothing is killed, proclaims it. In fact, there is only one Eucharist (or Holy Communion or Mass – it’s all the same), and always when it is offered anywhere in the world by the Church, it is joined to the one true sacrifice on Calvary.

When He comes again, the image of Messiah as King will be fulfilled in all of its glory. This is the terror of all that is evil, and it is the hope of the Church. It is a certainty that he will come on the Last Day to judge the living and the dead, to establish Heaven on Earth, to rule and so grant peace forever. Both Testaments speak of His coming as the King Messiah. Daniel saw one coming in the clouds of Heaven as the Son of man to rule with the Ancient of Days; Moses saw that “the Earth shall be filled with the glory of the Lord as the waters cover the sea.” Our eternal hope is not based upon imagination and conjecture, but upon the sure promise given in and by Christ’s resurrection from the dead. We are given the “sure and certain hope of the resurrection on the Last Day.” It is the only such hope, and it is impossible to separate that hope from Jesus Christ, because immortality, the hope of eternal life, is ours only through His resurrection. So writes Saint John about those who, due to this hope, purify themselves: “Beloved, now are we the sons of God, and it doth not yet appear what we shall be: but we know that, when he shall appear, we shall be like him; for we shall see him as he is (I John 3:2).”
John the Baptist prepared the way of the Lord by his message of repentance. Pondering these pictures of the Messiah as priest and King we are both warned and encouraged with both fear and hope. This is the meaning of Advent. It is of eternal consequence that we give heed.
Posted by Fr. Robert Hart at Saturday, December 22, 2012