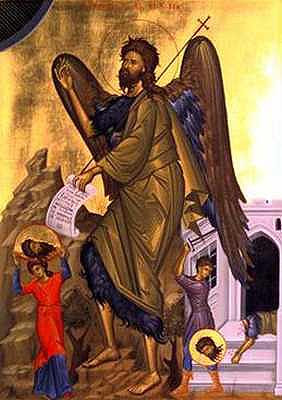 As we ponder the Epistle and Gospel appointed for this day, in light of the Collect, we see that John the Baptist is a model for one of the essential features of ordained ministry in the Church. It is the duty of every bishop, priest and deacon, by the grace of God, to live up to this calling: "The ministers of Christ, and stewards of the mysteries of God." It is essential to the very nature of the ordained ministry that a man "be found faithful," and that his life and teaching present a constant message that is part warning and part comfort. A warning that "we shall all stand before the judgment seat of Christ (Romans 14:10)," and the comfort of imparting strength to persevere by the gifts of the Holy Spirit. The words, "stewards of the mysteries of God" sum up the priestly ministry as expressed in our Ordinal: "And be thou a faithful Dispenser of the Word of God, and of his holy Sacraments."For every Divine mystery (μυστήριον) is both of these, God's word and his sacraments.
In light of the Collect, and of the message of Advent in general, the Church is saying to us, from generations past, that the priestly ministry in the church has as its purpose to prepare each person to meet Jesus Christ face to face when he comes again in glory, and when each of us stands before his holy presence. Who better than John the Baptist can so model this ministry, a man who was both priest and prophet? He was a priest, the son of a priest who was named Zechariah, as we learn from the opening of the Gospel of Luke. The Levitical priesthood was inherited, as we know from the Law of Moses. John's priestly ministry was quite unusual, as his offering was the oblation of baptism for every penitent who came in sincerity to be cleansed in his mikvah, his baptism. And, John was a prophet who proclaimed the word of the Lord. He spoke the word of the Lord by the banks of the waters of Jordan. He was not preaching his message simply to add another idea to the eschatology of Judaism, or to promote an intellectual curiosity. Jesus was about to arrive on the scene, and John's message was to make ready a people to follow him.

John was sent "in the spirit and power of Elijah to turn the hearts of the fathers to to the children, and the disobedient to wisdom of the just (Luke 1:17)." The angel Gabriel combined words from Malachi with words from the Books of the Kings (Malachi 4:5, I Kings 18:37), a truly angelic commentary on scripture. Three years ago, my sermon was a bit lengthy, a Bible Study in which we saw that Elijah "turned the hearts" of the people of Israel back to God through his miraculous victory over the prophets of Baal. "The wisdom of the just" is the wisdom of our fathers. Today there is increasing pressure on clergy to conform to a new standard, and to reject the word of the Lord as it has been revealed, received and taught by all of our fathers, both our Jewish and Christian fathers, and above all Christ the Everlasting Father (Isaiah 9:6,7) or Last Adam (I Corinthians 15:45) of the new and redeemed humanity. But, following the model of John the Baptist, every faithful steward resists the pressure to rewrite God's Law, the pressure to grant permission instead of absolution, the pressure to call evil good, and good evil; for a faithful steward turns the disobedient to the wisdom of the just by teaching right doctrine, and calling for repentance. He remains faithful to what has been declared from the beginning, Quod ubique, quod semper, quod ab omnibus creditum est ("That which is believed everywhere, always and by all").

The faithful steward preaches his message to make ready a people, each member of the Church and those will hear and become members, for the same Christ who was here before, for the day that is coming when each of us will see him as he is, risen and glorified. That day will be the time when unbelievers will be filled with dread to look upon his holy face. To prepare the heirs of salvation and eternal life is what our mysteries are for, and why we must be faithful stewards.

The message from the Gospel reading appointed for today is this: Do not look to be impressed by the standards of this world. Do not look for a man to be "charismatic" in secular terms, but rather see and know that he is charismatic in the truly Biblical sense of that Greek word. That is, look to the gifts of God that come through a faithful steward, and know that each has the grace, or gift (χάρισμα, charisma) of Christ's own ministry. What did you expect to see here? What do you want to see? A king? A potential CEO or President, a man with worldly wisdom? Someone with razzle-dazzle who can charm or mezmorize? A skillful or exciting entertainer? These things may impress the carnally minded. All you see here, with natural eyes, are men. We do not live in king's houses.

Neither can a faithful steward allow himself to be "a reed shaken with the wind." He must not present new and exciting doctrines, or claim to have revelations that set him apart from or above the teaching of the Church in every age. St. Paul warns about the winds of doctrine that blow in the absence of God's apostles, prophets, evangelists, pastors and teachers (Ephesians 4:11f). That is, when instead of listening to faithful stewards, "people heap to themselves teachers, having itching ears," that "they shall turn away their ears from the truth, and shall be turned unto fables (II Tim. 4:3,4)." Such fables plant what he also called "the doctrines of demons (I Tim. 4:1)." If only we would be reeds shaken with the wind, we could invent whatever new and strange doctrine it takes to have a following. Not merely a cult following in the sense that is shunned and rejected by society, but the respectable sort of following that eats up "a new thing" other than the only authentic "new thing," that is, the Covenant established by Christ (cp. Isaiah 43:19 with Jeremiah 31:31-34).

But a faithful steward is not a superstar with the worldly and carnal sort of "charisma," and he is not willing to teach windy doctrinal innovations that blow the people around. The faithful steward reminds everyone that Jesus Christ is coming, and we must all be prepared to meet him. Unbelievers will cry out to the mountains and hills to hide them from his face, while believers will see him as he is, and be transformed after his immortal likeness to become partkers of the Divine nature. The faithful steward reminds everyone that it is and shall be "either-or." Each person will be in one of two camps: Either the coming of Christ will be dreadful and the gloom of darkness, or it is the great joy of eternal life, and the brightness of eternal day. Are you prepared? Which camp will you be in? Which camp are you in right now?

The mysteries that we teach center around the Gospel, and if you understand that Christ died for your sins (I Corinthians 15:3) and was raised again for your justification (Romans 4:25), you know how to repent and be forgiven, free from all sin and every barrier between your soul and God's mercy. You may also receive the mysteries that we administer, and be absolved from your sins, and feed on him as the Bread of life and so live forever. The faithful stewards are here to be instruments of Christ's salvation for all who are in the camp of joy, those who will be glad at the Lord's appearing.
Posted by Fr. Robert Hart at Saturday, December 11, 2010

Thank you Robert for another excellent post. I have been meditatating on 'beholding the glory of God in the face of Christ'and using two old friends to aid me. John Owen's exposition of John 17:24 (The Glory of Christ) and Andrew Murray's treatment of Like Christ. In both the emphasis is on the duty & privilege in this life of beholding Christ's glory by faith and this experiencing His beauty now is a real foretaste of heaven itself. In light of your post and I John 4:16-18, is not this the way we prepare ourselves and our charge to meet God?

It is taught in some Catholic circles that John's baptism replaced the Old Testament law of circumcision. Given that circumcision is a male rite and baptism is for males and females, it seems to me that John the Baptist was ushering in a gender-inclusive, spiritual preparation/cleansing that had not previously existed (other than that women were required to take the ritual mikvah bath following childbirth) ...sort of like the modern-day woman's right to vote alongside men. Speaking from a female perspective, this must have been quite affirming for Israelite women but perhaps threatening for some Israelite men. Culturally it must have been volcanic!