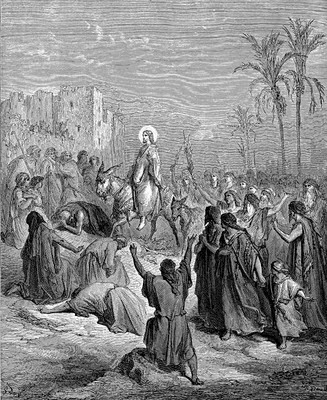 The liturgy for the final Sunday in Lent, when we come to something like a pre-climax just before the real climax on Easter morning, is an embarrassment of riches. We have two moments of real drama today: first, the re-enactment of Our Lord's not-quite-triumphal entry into Jerusalem, and second, the long reading of St Matthew's Passion narrative. Between these two splendid moments, the Prayer Book gives us a brief reading from Philippians as the Epistle appointed for the day.

Bible scholars are almost unanimous in their suspicion that in these verses Paul was quoting a hymn from the early church's worship. These verses read like a hymn of six stanzas, three devoted to our Saviour's humiliation and three more (beginning at “Wherefore God”) proclaiming His exaltation. This passage almost cries out to be sung and is the basis for one of our finest hymns. See The Hymnal 1940, Hymn 356.

Today we must concentrate on the first part of the hymn Paul was quoting. There we meet the contrast between “the form of God” and “the form of a servant.” Those two expressions reveal the amazing chasm of distance the Incarnate God traveled for us. How far is it from heaven to earth? No, the question really is, How far is it from God's throne to Calvary's hill? A distance more vast and exhausting than we can imagine. And this word “form” is not just outward show, but inner reality. He possessed the very nature of God and took the role of a servant in the most realistic sense of the word.

From the moment when God commanded Adam in the garden “to till it and keep it,” and to give names to every beast of the field, God had been seeking a perfectly obedient and cooperative servant, to bear His image in His creation. Beginning with Adam, such a servant had never been found-- until Christ Jesus appeared. His task had been a far greater burden than that of Adam; his garden is not Eden but Gethsemane. His perfect obedience is submission to the Cross itself.

But if Paul is quoting a hymn in this passage, the opening line is his very own. “Have this mind among yourselves, which is yours in Christ Jesus.” The attitude of Christ Jesus, in His self-denial, His perfect obedience, and His willingness to suffer, is to be our attitude as well. Those who are “in Christ Jesus” are called to be like Him, marked with the humility of slaves. Here is the point that Paul was striving to make as he quoted this hymn. Christ was not only our substitute but also, as today's Collect puts it, our example. And as St Peter wrote (I Peter 5:6), “Humble yourselves therefore under the mighty hand of God, that in due time He may exalt you.”

One neglected key-word in the Biblical vocabulary is the word “memorial.” This word appears inconspicuously in the Words of Institution, “Do this in memory of me.” A more precise translation of the Greek would be, “Do this for my memorial.”

To us the word memorial refers to a purely mental exercise, a straining of the mind to think of something far away and long ago. We hold a “memorial service” for someone dead, not for someone alive. This word memorial might refer to the re-enactment of a battle, which everyone knows is not the real thing.

But as the Bible uses the word, a memorial (and here the Eucharist is the example par excellance) is not for someone absent but for Someone Present. A true memorial brings things out of the past and makes them contemporary. The is because the One who does the remembering is none other than God Himself! Think of all the times the Psalter calls upon God to remember His covenant and His promises, or think of how we pray in the Litany, “Remember not, Lord, our offenses, nor the offenses of our forefathers.”

In the Eucharist we are permitted to do something far greater than just sitting around and thinking about the death of our Saviour. Instead, we call upon God to remember that sacrifice, to make it present before our very eyes, to make it effective and powerful here and now. As Hymn 189 expresses it,

And only look on us as found in Him.”

Now we come again to Holy Week. This is emphatically not just a historical commemoration, like Columbus Day or Independence Day, of remote events from another time, whose relevance we must strive to recall. In the Blessing of Palms today, in the Mass of the Lord's Supper on Maundy Thursday, in the Vigil around the Cross during the sacred three hours of Good Friday, we are permitted to re-live the mighty acts of God for our salvation—acts which we treat rather cheaply. The special services of Holy Week are a unique opportunity to encounter Christ and to grow closer to Him.

St John's Gospel emphasizes that Peter did not merely look at the empty tomb, but moreover Peter went into the tomb. That is what this holy season is all about. We make and keep this Memorial of our Saviour that we may climb down into Him and find our resting-place in Him. LKW