On a lighter side 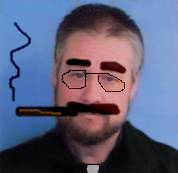 Back in 2000 the Vatican issued the document Dominus Iesus. In it was a statement about itself as the Catholic Church, then a statement about "true particluar churches" and then about something called "ecclesial communities" which do not have a valid Apostolic Succession or Eucharistic Theology. In those days the Archbishop of Canterbury was one Dr. George Carey, the Jimmy Carter of ABCs, known in my circles as "Doc Carey." Instead of keeping quiet, or saying something like, "we have both a valid Apostolic Succession and Eucharistic Theology"- that is, something that an Anglican ought to say, he said this:

"Even though the document is not part of that process, the idea that Anglican and other churches are not 'proper churches' seems to question the considerable ecumenical gains we have made." The document never mentioned Anglican churches. But Doc just had to fill in the blank. At that time I waxed poetic and wrote:

They're saving brains at Lambeth Palace
Good Green Doc Carey is certain t'was malice
Malice that made the Card'nals in Rome
Smirk at his Kirk in a terrible tome!
Says Alice.

They're saving brains at Lambeth Palace
Good Green Doc Carey is certain t'was malice
So he opens his mouth
And fingers his own
In g'neric blank spaces
Provided by Rome,
Says Alice.

They're saving brains at Lambeth Palace
Good Green Doc Carey is certain t'was malice
If we're lucky he's done
With his singin' the Blues
To the guys and the gals
Who create all the news,
says Alice.

Orthodox: Someone who believes in Apophatic Ecclesiology, i.e. he is not Western

Roman Catholic: Someone who believes that the Pope is Infallible, and quite often wrong.

Episcopalian: A Unitarian with Trinitarian liturgy.

Anglo-Catholic: A Roman Catholic without the Pope, who prays like Shakespeare

Unitarian: Someone who rejects the very idea of dogma, and dogmatically rejects the Trinity

Baptist: Once saved always saved, and does not believe in Indulgences

Calvinist: Someone for whom the words of Christ shed light on the teachings of John Calvin.

Lutheran: Someone for whom the words of Christ shed light on the teachings of Martin Luther

There. Now I have offended everybody equally. I have even offended myself. In fact, I have offended me so bad that I will never talk to myself again.
Posted by Fr. Robert Hart at Thursday, April 27, 2006

As a 25yr veteran of the Pentecostal ministry, I appreciate the accuracy of this statement. It is bascially what I'd been saying about myself until I realized that my medieval mysticism needed to come home to the Catholic Tradition where it always belonged.

Ouch, I wish that Lutheran definition weren't so accurate!

A good friend has just introduced me to your splendid blog. At the present time, when the Anglican Way has become a byword to the larger Christian world-thanks to the enormities of apostate revisionists, I have become something of a collector of orthodox Anglcan blogs; its cumulative effect, I have found, is a good tonic for dissipating bewilderment, rage and despair.

Keep up the good work.