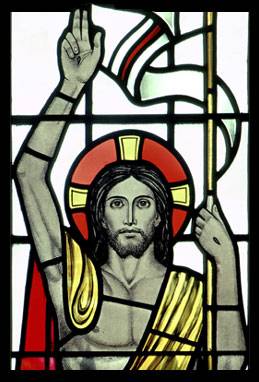 When I met with all of the bishops of the Province, they made a very important point- with one accord: In the Anglican Province of Christ the King, we emphasize the sacramental life. Now, generally speaking, the sacramental life is the way of salvation. This is the Catholic Tradition that the Church has taught from the beginning, from that first day of Pentecost when the appearances of the risen Lord Jesus Christ were a fresh living memory. It is the Faith we have received from our fathers, including those of our Anglican heritage. In the Gospel appointed for today we see the ordination of the Apostles themselves. This is not the Great Commission (for that He spoke on different occasions during His resurrection appearances); but rather this was a special bestowal of gifts to empower them for the day their work, after several days of prayer, would really begin- that day that we shall celebrate in a few weeks on Whitsunday, that is, Pentecost.

What happened when the Risen Lord breathed on them, and when He spoke these words of ordination? It was no mere formality; it was supernatural. When we consider those other words we have heard today from scripture, those of the First Epistle of the same Saint John, it may help us to place them in the context of the opening of that Epistle. In this way they take on their full meaning. In a few minutes we will hear that opening. For now understand, when John tells us about the witness of the Holy Spirit who speaks the truth within the Church, he hearkens back to those early days, those days of Easter and Pentecost, those days when they were seeing the Risen Lord, and the day when the Holy Spirit came in power to create a large body of Christ’s Church in the earth. And, at the center of it all was the ministry of the Apostles.

It was given to them to forgive sins; not simply to preach forgiveness, but to have the power of the keys of the kingdom; to bind and loose- and the power to forgive sins or retain them. Do we understand this? Remember in the Gospel of Matthew when Jesus was about to heal the paralytic man? Listen to these words from the ninth chapter of Matthew, vs. 2-8:

"And, behold, they brought to him a man sick of the palsy, lying on a bed: and Jesus seeing their faith said unto the sick of the palsy; Son, be of good cheer; thy sins be forgiven thee. And, behold, certain of the scribes said within themselves, This man blasphemeth. And Jesus knowing their thoughts said, Wherefore think ye evil in your hearts? For whether is easier, to say, Thy sins be forgiven thee; or to say, Arise, and walk? But that ye may know that the Son of man hath power on earth to forgive sins, (then saith he to the sick of the palsy,) Arise, take up thy bed, and go unto thine house. And he arose, and departed to his house. But when the multitudes saw it, they marvelled, and glorified God, which had given such power unto men."


Look at two things that are here: 1) Many people today say that “only God can forgive sins.” But, they are agreeing not with Christ; they are agreeing with the Pharisees who did not believe in Him. 2) Look at the last line: “But when the multitudes saw it, they marvelled, and glorified God, which had given such power unto men.” Not just to one man- to men plural. And so, Christ, in today’s Gospel tells the Apostles: “Whose soever sins ye remit, they are remitted unto them; and whose soever sins ye retain, they are retained.”

This has special meaning for every priest. I was ordained by a bishop who uses the 1928 Book of Common Prayer; and the Ordinal makes use of the words of Christ from this chapter: This ordinal is all in the Book of Common Prayer that sits in front of you in the pews. It says on page 546:

"When this Prayer is done, the Bishop with the Priests present, shall lay their Hands severally upon the Head of every one that receiveth the Order of Priesthood; the Receivers humbly kneeling, and the Bishop saying,

RECEIVE the Holy Ghost for the Office and Work of a Priest in the Church of God, now committed unto thee by the Imposition of our hands. Whose sins thou dost forgive, they are forgiven; and whose sins thou dost retain, they are retained. And be thou a faithful Dispenser of the Word of God, and of his holy Sacraments; In the Name of the Father, and of the Son, and of the Holy Ghost. Amen."

This power has been handed down from the times of these same Apostles in a real sacrament through the Apostolic Succession of bishops. It is not simply a relay race; it is the supernatural power of the Holy Spirit active in a time space world of matter, a reality that springs from Christ’s Incarnation and that is embodied in history, and is alive here today among us. Furthermore, it is not based upon the success or failure of the men though whom it has come, in terms of whether or not they have been saints or sinners. The work is the work of God. It has pleased God to establish His Church so that the Risen Christ, even after being taken to the throne of God and hidden away from sight until He comes again in glory to judge the living and the dead, remains present in the earth, extending the mystery of His Incarnation and of His Resurrection through the Apostolic ministry of the priesthood. Many churches have no one who believes that he has this power to forgive or to retain sins. Their doctrine is that only God can forgive sins. And, in all humility and charity, I must challenge them to explain what they do with these words of Jesus Christ. If the power to forgive sins is not present, then how can it be the same Church that Christ established? I do not deny that He is present in these churches; I do not deny that through them God gives knowledge of salvation. But, I must insist that the Church does not only proclaim salvation. To the Church, through the Apostolic ministry, is given the power to administer salvation by supernatural gifts that do not depend on the wisdom of men; but on the power of God. “Ye men of Israel, why marvel ye at this? or why look ye so earnestly on us, as though by our own power or holiness we had made this man to walk?” It is not our own power that had made the crippled man to walk, Saint Peter was telling a crowd that had witnessed a miracle; It is through the name of Jesus Christ and through faith in His name. “Neither is there salvation in any other: for there is none other name under heaven given among men, whereby we must be saved,” he would say on another occasion.
So we come now to the opening of Saint John’s Epistle, and to the context of the words that we heard about the witness of the Holy Spirit within the Church:

"That which was from the beginning, which we have heard, which we have seen with our eyes, which we have looked upon, and our hands have handled, of the Word of life; (For the life was manifested, and we have seen it, and bear witness, and shew unto you that eternal life, which was with the Father, and was manifested unto us;) That which we have seen and heard declare we unto you, that ye also may have fellowship with us: and truly our fellowship is with the Father, and with his Son Jesus Christ. And these things write we unto you, that your joy may be full."
The message of John in His Gospel was that “the Word was made flesh and dwelt among us. And we beheld his glory…” Here he speaks of seeing Christ, and of touching Him with his hands. He says that what he and the other Apostles heard and saw is what they have passed on. He says that life in the Church, the life in which we are called to be saved, is to have fellowship with the Apostles and through them, fellowship with the Father and His Son Jesus Christ.

Well, that may make it all sound like an exclusive club- until we remember that this fellowship is to be extended throughout the whole world, and the Gospel is to be preached to all nations. How do we have fellowship with the Apostles after 20 centuries? The simple fact is, through the sacramental life we are given, to use the phrase of Paul Harvey, “the rest of the story.” These days, everyone with a television or radio has heard someone tell them about the need to “come to Jesus and be saved.” And, we say to that, “Amen!” We even may find ourselves pronouncing it with a long “A”- Ae-men! But, we want to proclaim the rest of the story; the sacramental life. We want to extend the fullness of Apostolic fellowship to everyone; We want your joy to be full. Not superficial; not simply a happy feeling. We want your joy to be full- that is, filled with all the fullness of God, established and built upon solid faith, built upon knowledge of the truth of our salvation in Jesus Christ.
And it comes from the Incarnation; it all comes from the manifestation of the Word of Life in the Flesh; it is continued as Christ remains incarnate here in His body the Church. The Risen Christ is known to us in the waters of Baptism, in the Apostolic gift of Confirmation. He is known to us in the priestly ministry of the forgiveness of sins. He is known to us in the Breaking of Bread.
Posted by Fr. Robert Hart at Sunday, April 23, 2006