A Teaching & Proclamation on Abortion

The Bishops of the Anglican Joint Synods Churches released the following statement on the matter of abortion. In 1973 the Supreme Court paved the way for legalized abortion in the United States in a landmark decision known as Roe v. Wade.  Four years later, The Affirmation of Saint Louis laid out the following in response: “every human being, from the time of his conception, is a creature and child of God, made in His image and likeness, an infinitely precious soul; and…the unjustifiable or inexcusable taking of life is always sinful.”  For over forty years the bishops of the Joint Anglican Synods (commonly known as the G-4) have upheld this teaching, and proclaimed that protection of the unborn is a fundamental principle of catholic moral law.  Though we generally refrain from engaging in politics, recent events in New York and Virginia compel us to reaffirm this teaching and to speak out against continued attempts by certain elected leaders to advance what has aptly been termed the “culture of death.”  On January 22nd of this year, the New York State Legislature passed the Reproductive Health Act, a statute that expands the state’s already liberal abortion policies by allowing the termination of pregnancy up until the moment of birth; permitting physician assistants, nurse practitioners, and licensed midwives to perform abortions; and removing penalties for performing an abortion from the state’s penal code.  Not only does this legislation allow for the killing of a viable human child, it runs the risk of exposing women to higher-risk medical procedures and removes protections against domestic abuse.  Already a New York prosecutor has dropped felony abortion charges against a man who murdered his girlfriend and their unborn child.  In Virginia, where similar legislation has been proposed, the current governor has made statements that appear to endorse the notion that babies who survive late-term abortions could be left to die.  Such sentiments reveal how far removed the pro-abortion movement is from the values expressed in a document penned by another governor of Virginia, one which asserts that all humans are “endowed by their Creator with certain unalienable Rights,” and “that among these are Life, Liberty, and the Pursuit of Happiness.” A society founded on these principles cannot support legalized abortion.  If the right to life is unalienable, it belongs to the individual alone, and cannot unjustly be taken away. Moreover, the right to life possesses a logical priority in that all other rights flow from the individual’s status as a living being.  Curtailing the right to life undermines the principles of natural law and threatens the very fabric of our democracy. We, the bishops of the St. Louis Continuum, therefore call upon all Christians and people of goodwill to join us in resisting the expansion of abortion in the United States, and working to roll back the laws that permit it in the first place. Our role, however, is not to craft legislation, but to bring the world to Christ, a process that begins in prayer.  We therefore ask our clergy and laity to pray for those who support the practice of abortion, asking God that their hearts may be changed.  Pray for the women who are struggling with the decision to keep a child, particularly those who are under outside pressure to end a pregnancy.  And, as always, pray for the unborn children at risk, that they might come to know the blessings of this life.  We also call upon our people to support organizations that promote adoption, minister to women in crisis, and assist families in need.  We encourage them to give to these organizations the gifts of talent, treasure, and especially time, that through making personal connections with those involved, we may witness to the goodness and mercy of Christ.  We ask all of this with the fervent prayer that every life may be cherished and every person may be recognized as a child of God. 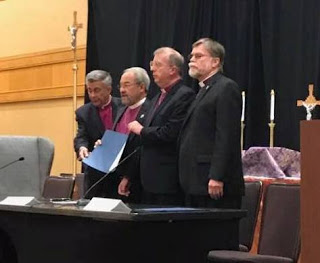