No variableness, neither shadow of turning. 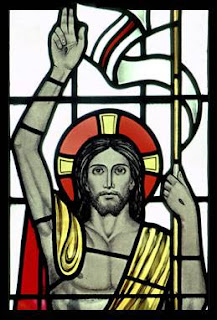 From today's Scripture readings we may learn that God is the author of our salvation, that it was all his plan, and that it is his gracious will that sustains us throughout this life, and guarantees the joy of eternal life in Christ. None of these good things were our idea, nor were they a grudging benefit in answer to our pleading. Our entire inheritance given to us in Christ's Testament, the New Covenant, has been the will of God the Father and the Son and the Holy Spirit from all eternity. In that long discourse after supper, recorded by John, Jesus spoke words beyond the understanding of the disciples, words that demonstrated how fully, how detailed, is the counsel of God's will (Eph.1:11). Jesus said to them just enough, in that discourse, for them to remember later, at the time when the Holy Spirit would be with them as the other Comforter (that is, the other paraklētos), and as the Spirit of Truth.
That time arrived, the Day of Pentecost, when they were baptized with the Holy Spirit (Acts 1:5), and began to be the voice of God in the earth, the messengers by whom the Holy Spirit convicted the world of sin, and of righteousness and of judgment. They knew the truth and were able to teach it and hand it down to all generations that have followed. This plan from eternity, the eternal counsel of God's will, has meaning today for the Church, and for each one of you as a member of the Body of Christ.

To begin with, based on the promise made here by the Lord Jesus Christ, you may believe the teaching that has been handed down throughout the centuries. "Howbeit when he, the Spirit of truth, is come, he will guide you into all truth," is not spoken to any of you as an individual. You cannot decide the truth, in this sense, for yourself.

"The Holy Ghost this signifying, that the way into the holiest of all was not yet made manifest, while as the first tabernacle was yet standing: Which was a figure for the time then present, in which were offered both gifts and sacrifices, that could not make him that did the service perfect, as pertaining to the conscience. But Christ being come an high priest of good things to come, by a greater and more perfect tabernacle, not made with hands, that is to say, not of this building; Neither by the blood of goats and calves, but by his own blood he entered in once into the holy place, having obtained eternal redemption for us. For if the blood of bulls and of goats, and the ashes of an heifer sprinkling the unclean, sanctifieth to the purifying of the flesh: How much more shall the blood of Christ, who through the eternal Spirit offered himself without spot to God, purge your conscience from dead works to serve the living God?"

"For the law having a shadow of good things to come, and not the very image of the things, can never with those sacrifices which they offered year by year continually make the comers thereunto perfect. For then would they not have ceased to be offered? because that the worshippers once purged should have had no more conscience of sins...Having therefore, brethren, boldness to enter into the holiest by the blood of Jesus, By a new and living way, which he hath consecrated for us, through the veil, that is to say, his flesh; And having an high priest over the house of God; Let us draw near with a true heart in full assurance of faith, having our hearts sprinkled from an evil conscience, and our bodies washed with pure water."
(Heb. 9:8-14; 10:1,2,19-22).

What does this mean? Often we think of Christ's atoning death as satisfying the righteousness of God, and so we read in the Suffering Servant passage that He is the true Sin Offering for which the sin offerings of the Law were a mere shadow (Isaiah 53:10). We see also that we would not be able to receive forgiveness without atonement, without the faith that our own sins have been covered. That is a necessary part of the Law of God written on our hearts. In the suffering of Christ on the cross we see not only payment for our sins, but two things that we need. The first is, as I said, that we may truly believe that we are forgiven, we need to see that our sins are paid for, covered, atoned for by Christ. We need also to know that God is just in justifying us, rather than unjust, that He is not every bit as unprincipled as the sinners he forgives ("To declare, I say, at this time his righteousness: that he might be just, and the justifier of him which believeth in Jesus." - Romans 3:26). So, we see in Christ's suffering and atoning death the truth that heals our consciences after first breaking our hearts: that is, what a terribly weighty matter it is indeed that our sins are the very opposite of Divine Love. Without that we could not be changed as we need to be. Without that, how could it be part of the New Covenant that God has now written His law on our hearts (Jeremiah 31:31-34)?
He conquered death also, which is what this season of Easter is all about. His resurrection will be our resurrection when he comes again in glory. And as he cannot die again, ( 6:9) we too will become immortal through him, and live forever. Now, that is the Gospel, and never let anyone tell you another gospel; for there is no other authentic Gospel (Galatians 1:6-9).
So, that phrase, which sounds so grand that we may fail to hear its meaning, ought to comfort us greatly: "The Father of lights, with whom is no variableness, neither shadow of turning." The word for this in academic theology is "Impassibility." In the first Article of Religion it is said this way, that God is "without ...passions."  It means, simply, God does not change. He does not change his mind, he does not change his nature, he does not change his will, he does not change at all. In all eternity God is perfect in three Persons. He has no need of learning, he does not need to gain wisdom (certainly not from puny creatures like us), he does not need to mature, does not “evolve.” Nothing has ever effected a change in God. He is perfect in all eternity. The cross and resurrection did not change God; they changed us.
The impassible God, the God who does not change, will not forget you.

"But  said, The LORD hath forsaken me, and my Lord hath forgotten me. Can a woman forget her sucking child, that she should not have compassion on the son of her womb? yea, they may forget, yet will I not forget thee. Behold, I have graven thee upon the palms of my hands; thy walls are continually before me." (Isaiah 49:14-16)

In some religious circles it is popular to promise that everyone who has faith, that is real deep faith, will be healed of all earthly sickness, will be in perfect health, will be rich, and live in victory over all things all the time. By twisting the Scriptures and wrenching Bible verses violently from their context, they present this burdensome, impossible, and dangerous doctrine, and often extract great sums of money from people looking to escape from desperate poverty by what actually constitutes a practice of attempted magic. But, these "faith and prosperity" preachers will get old themselves, and they will die the death of all men.
Real faith carries with it trust. If God seems to hear your prayers and grant you what you ask of him, it is because of his love and wisdom. But, if he seems not to grant your prayer, and perhaps even seems as if he were far away, that too is because of his love and wisdom. He need not prove his love over and over. He proved his love for you already on the cross, and calls you his friend from the cross. It is the same love and the same Fatherly wisdom from God who does not change. You may have faith enough, for a grain of mustard seed is enough, and yet have a share of suffering that seems impossible to bear. Another may hate God and seem to have all his heart's desire. What matters for you is that God knows what is best for each of his children, and so you may trust his love and wisdom, the love of the one who has the scars in his hands and feet, with the wound of the spear in his side. You may trust him whether you have prosperity and healing, or whether you have a share of suffering for a time.

Only one thing can stand between you and the love of God in Christ Jesus our Lord, and it is not a created thing, that is, it is not a thing that God made (Romans 8: 38,39): That one thing is unrepentant willful sin, or, as James calls it, "superfluity of wickedness." Remove all such barriers, if they are in your life, and you may trust that whatever comes is, ultimately, in the hands of the one you may trust absolutely.

Then we have only one thing left to do, and that is to give thanks. In the words of today's Psalm from Morning Prayer:

What reward shall I give unto the LORD * for all the benefits that he hath done unto me? I will receive the cup of salvation, * and call upon the Name of the LORD.