The scriptures today warn us of two kinds of deception, namely the deception of false religion and the deception of the cares of this world. And, what we see connecting these passages of scripture is summed up perfectly by our Lord when He tells us to seek first the and His righteousness. In that seeking we are not escaping reality, rather we are facing it in its fullest. We can face good news and bad, even the fact of our own mortality, with a brand of courage unknown except by faith.

, in this Epistle to the churches in , saw the need to correct the heresy of self-appointed teachers who proclaimed a new and different “gospel.” In the first chapter (vs. 6-9) he told them:

“I marvel that ye are so soon removed from him that called you into the grace of Christ unto another gospel: Which is not another; but there be some that trouble you, and would pervert the gospel of Christ. But though we, or an angel from heaven, preach any other gospel unto you than that which we have preached unto you, let him be accursed. As we said before, so say I now again, if any man preach any other gospel unto you than that ye have received, let him be accursed.”

These words may sound harsh to people who imagine that all religion is good: But every genuine pastor, every sincere bishop, priest, or deacon, must teach faithfully what has been revealed and handed down. We must not accept what is taught in cults, or even in churches that are turning away from a clear and faithful adherence to "the faith once delivered to the saints (Jude 3)."

The heresy addressed in this Epistle was a new teaching that all of the Gentiles who had converted to Christ could not be saved unless all the males were circumcised and kept the ceremonial rituals of the Torah, that is "the works of the Law," and then only as interpreted by their approved Rabbis. Today we have false teaching of every sort all around us, and it has terrible consequences spiritually, and sometimes physically.

For example, the Jehovah’s Witnesses not only teach the Arian and Pneumatimachian heresies by denying the Trinity, by denying the existence of the Holy Spirit, and denying the bodily resurrection of Christ (who appeared to witnesses). They also cause their people to die, and at times have caused the deaths of their own children, because they forbid something as good and practical as blood transfusions. It is tragic. For many years my father worked side by side with a good friend, a man we all liked very much, who died at the age of sixty from heart disease. A very simple medicine could have kept him alive to this day; but he was a member of Mary Baker Eddy’s so-called “Christian Science Church,” (three misnomers) and so he would not take medicine. As a result of his beliefs he died before he could retire, before he could meet his grandchildren. The picture we are given of God, by these kinds of doctrines, is one of a very unreasonable and harsh taskmaster whose yoke is not at all easy, and whose burden is terribly heavy.

In the Gospel Jesus lifts our eyes heavenward. The Book of Common Prayer (1928, American) does something unusual in this passage. It does not use the exact words of the King James Bible, “give no thought for the morrow.” Instead, this one passage uses the 1888 Revised Version: “Be not anxious for the morrow.” Anxiety can take your mind off of the Lord; it can disturb your peace and ruin your whole life. Anxiety is the opposite of faith. Isaiah the prophet tells us:

“Thou wilt keep him in perfect peace, whose mind is stayed on thee: because he trusteth in thee. Trust ye in the LORD for ever: for in the LORD, the LORD, is everlasting strength (Isa. 26:3,4).”

This strength is real and effective for us here and now in this life, and it is the only strength that lasts forever. No matter what evils come in this life, as people face the death of loved ones, as they face betrayal, economic hardship, illness, their own mortality and the hostility of an unbelieving world, in the Lord is everlasting strength.

“Ye have heard of the patience of Job,” we are told (James 5:11). Let us look as well to the suffering of the Apostles. One of the most moving passages in all of ’s Epistles, at least for me, is a personal plea that he wrote near the end of his life to his son in the Faith, Timothy. It is not a deeply theological passage, at least not in an academic sense. It is not a passage that we can use to illuminate our minds with doctrine- and yet is a very useful passage for theology and doctrine if you reflect upon it. In the last chapter of Second Timothy we find two requests. First he wrote: “The cloak that I left at with Carpus, when thou comest, bring with thee, and the books, but especially the parchments.” Then he wrote, “Do thy diligence to come before winter.”

Think about that. When the Romans locked up a prisoner they did not feed him, or tend to his needs. All of the prisoner's needs had to be arranged by family and friends. At the end of his many years of service, which he once described as involving constant persecutions, and other troubles such as shipwrecks, hunger and cold, he had come to this. The Saint, the former Rabbi who was the father of the Gentile Christians, the man who wrote about charity in words more meaningful than any other passage ever written about love, the man who gave us most of the words of the New Testament, bearing in his body the marks of Christ, glorying only and ever in the cross of Christ, had instead of retirement and a nice pension, a cell in a dungeon and a sentence of death. He was going to face Nero's executioner. To get through his last Winter on this earth he asked Timothy to bring the cloak, and to hurry up and get it to him before the cold winds of Winter could blow through his cell.

Well, that may not seem like a very deep theological passage. But it is. We see the faith of this saint who looked above the things of this world, this last witness of Christ’s resurrection facing death without fear, suffering the loss of all things with joy. His needs were real. He needed the cloak. Also, he wanted his books, probably hand-written copies of the Old Testament scriptures. What good were “the books, especially the parchments,” to a man on death row? The answer is, he wanted to keep his mind fed with the word of God, because he knew, living in prison and facing death, that the truth of the word of God was his anchor.

“Seek ye first the and His righteousness, and all these things shall be added unto you.” Everything you need for this life will be added. You have no cause for anxiety as unbelievers do. But more than that, more than food and drink, clothing and a place to lay your head, in the Lord is everlasting strength, the gift of sharing immortality with the Risen Christ, and the hope of partaking of the Divine nature through grace. You need not fear that the one who died to take away your sins, and who has promised in His resurrection to be with us forever, will change His mind and break His promises. What you need in this life will be provided as you seek first His kingdom and righteousness. But, even more so, “in the Lord is everlasting strength.” The pledge is eternal life through the risen Christ who has overcome death. 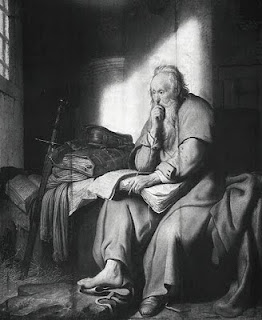 This is the faith that takes you through a life of real struggles and temptations. To feed and strengthen this faith you need to know what to rest your hope upon. For that you need the teaching that God has given by the revelation of His word. Dare I say it? You need the stable anchor of true theology and sound doctrine, because His word revealed in Scripture and known to His Church is where you discover the truth of God’s love.
Posted by Fr. Robert Hart at Thursday, September 10, 2015