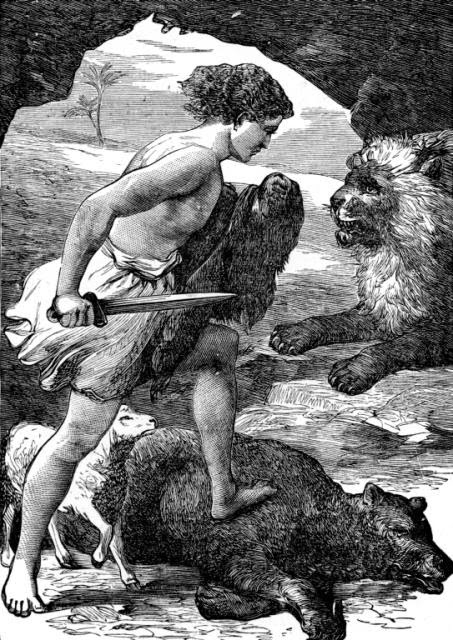 Today's reading from the Gospel of John can be expanded to include the next two verses, giving us a fuller context:

Therefore doth my Father love me, because I lay down my life, that I might take it again. No man taketh it from me, but I lay it down of myself. I have power to lay it down, and I have power to take it again. This commandment have I received of my Father.
The scriptures we have heard today tie together very profound mysteries about Christ’s sacrificial death, His patience and suffering, and about the care for us that the Risen Christ shows even now by continuing to guide His Church. The Shepherd has died for the sheep. He leads the whole flock, having died to redeem that which belonged to Him; having a double claim as our Creator and Redeemer. Christ is the Shepherd Who even now cares for the Sheep, and leads them, Who protects His flock in folds.
“All we like sheep have gone astray; we have turned everyone to his own way; and the Lord hath laid on Him the iniquity of us all.” So wrote Isaiah in his famous Suffering Servant passage, the passage from which Saint Peter draws in today's Epistle. I have said before that the Suffering Servant passage goes beyond Christ’s atoning death, predicting as well his resurrection by telling us that he would, after death, “prolong his days” as the agent of God’s will.
It predicts the day of Pentecost by telling us that Christ would “divide the spoil with the strong.” This echoes words from Psalm 68:18: “Thou hast ascended on high, thou hast led captivity captive: thou hast received gifts for men.” In this way the Holy Spirit reminds us, through the prophetic oracle, that all of the grace, and, indeed every gift, that God gives to us has come by way of the cross of Christ.
St. Anselm taught that Christ did all the work, and after earning a great reward for his labor, gives all of the benefits of his work away. He gives all of the earning, profit and reward to us. For, He is God the Son, and has need of nothing. St. Peter puts it to us with great force: “Who his own self bare our sins in his own body on the tree.” That’s the first message. Christ offered himself as the Lover of mankind, in fact, as the one who loves you. He is the sacrifice not just for the whole world, but for you; dying as much for each as for all. This is why I tell you so often; when you look up at the crucifix where he pours out his soul unto death, and you see his love there, take it personally.
After His resurrection, Jesus walked the earth for forty days before His ascension (Acts 1:3). In the Gospel According to St. Luke, we read this:

“And he said unto them, These are the words which I spake unto you, while I was yet with you, that all things must be fulfilled, which were written in the law of Moses, and in the prophets, and in the psalms, concerning me. Then opened he their understanding, that they might understand the scriptures, And said unto them, Thus it is written, and thus it behoved Christ to suffer, and to rise from the dead the third day: And that repentance and remission of sins should be preached in his name among all nations, beginning at Jerusalem (Luke 24:44-47).”

Both in the Book of Acts and in the various Epistles that follow, we are given a great deal of teaching. It would make sense to attribute that doctrine to what Jesus taught, that is, how He opened their minds to understand the Scriptures. One thing that is very apparent, from the whole New Testament, is that the Suffering Servant passage (Isaiah 52:13-53:12) was a prophetic foretelling of Christ’s death and sacrifice, and of His resurrection.
The New Testament gives us a theological understanding of that ancient prophetic passage. From the way the passage is quoted in the Gospels of Sts. Matthew (8:17) and John (12:38-41), from how Phillip used it to preach Jesus to the Ethiopian Eunuch (Acts 8:27-39), from the in-depth explanation in the Epistle to the Hebrews of Christ’s atoning sacrifice on the cross and His post resurrection priestly ministry of intercession, and from the many allusions in the reading today from the First Epistle of St. Peter, one thing becomes undeniable: A very early Apostolic doctrine of the Church is that the Suffering Servant passage in Isaiah is all about Jesus Christ and Him alone. It foretells His death, and explains the purpose of His death, “An offering for sin (Isaiah 53:10).” To deny that this understanding of the passage is one of the earliest of Apostolic teachings, is to argue with the writers of the New Testament. In the portion quoted above, from the Gospel of Luke, I believe we may attribute that understanding of the Suffering Servant passage directly to the Risen Lord Himself (and, no doubt, other passages).
We see in our Collect that we are to look upon Christ’s death and suffering as both an example of godly life and as the sacrifice for our sins. Unless we know that 53rd chapter of Isaiah, we cannot understand what Saint Peter is saying, nor can we fully grasp the meaning of today’s Gospel, or those other words of Isaiah from the 40th chapter:

He shall feed his flock like a shepherd: he shall gather the lambs with his arm, and carry them in his bosom, and shall gently lead those that are with young.

All that gentle care and goodness involved His death; and the Shepherd is the Risen Christ who cares for His Church until the Day when He comes again in glory. It is not enough to picture the Good Shepherd gently carrying a lamb in His arms, unless we see the print of the nails in His hands. As Fr. Wells has reminded us in one of his Bulletin Inserts:

"John 10 is the great 'Good Shepherd' chapter of the New Testament. The chapter in its entirety (we read only a few verses taken from a larger context) will lift us above the shallow and sentimental notion of what a good shepherd is, as so frequently depicted in religious pictures. What we find in John 10 is rather a picture full of danger and violence."

Indeed, better than the warm happy picture of Jesus carrying a lamb in His arms, in a peaceful meadow that suggests the second movement of Beethoven’s Pastoral Symphony (no. 6) to our mind’s ear, is another picture altogether. I prefer a Bible illustration I have seen of David, as a shepherd keeping his father’s sheep in the wilderness, having slain a bear, and now facing a lion, sword in hand. So David described speaking to King Saul, just before facing Goliath. The picture involves battle and danger, and in that way fits the Good Shepherd Passage, in the Gospel of John, far better than the peaceful image on many a stained-glass window.
The Good Shepherd’s goodness and love are demonstrated by His death. He has nothing else to prove. If His ways seem hard to learn, or His commandments seem burdensome, we must remember that He already has shown His love; therefore, we ought to trust that what He requires of us is due to His love- it is all for our good.
As the Shepherd He cares for us and commits the cure of souls to earthly pastors who represent Him. The true ministry of bishops, priests and deacons is to aid the salvation of your souls. Easy church membership is a disservice. We must not make everything too easy, because if we do that we frustrate the working of God’s grace in your lives. This is why even in Easter we may need to be reminded that we do not stop carrying the cross in this life. We cannot set our affection on things above (Col. 3:2) without the aid of the cross, that is, the cross we must carry as His disciples.
“Behold, what manner of love the Father hath bestowed upon us, that we should be called the sons of God: therefore the world knoweth us not, because it knew him not. Beloved, now are we the sons of God, and it doth not yet appear what we shall be: but we know that, when he shall appear, we shall be like him; for we shall see him as he is. And every man that hath this hope in him purifieth himself, even as He is pure. (I John 3:1-3)”

Only as the Risen Christ, scars and all, He still leads us. With the marks of His death yet in His hands, His feet and His side, the living risen Christ, our Shepherd, leads us. So, we follow not only the example of patience and holiness; we follow His direction and hear His voice. Herein is a great danger: We can be religious without hearing His voice; we can build churches without hearing His voice. Remember, the Hebrew word sh’mai means both to hear and to obey. If we obey Him, then we will know Him as He knows the Father. “And this is life eternal, that they might know thee the only true God, and Jesus Christ, whom thou hast sent ( John 17:3).”
In The Lion, the Witch and the Wardrobe, Peter, Susan and Lucy, upon hearing that Aslan is a lion, ask, “Is he safe?” Mr. Beaver answers: “Lord love ya’ child. ‘Course he’s not safe. But, he is good.” As we all know, Aslan represents Jesus Christ. And so C.S. Lewis provides a true insight for us: The Lord is not safe, but He is good. Goodness means that he does not deal with us as we deserve, but for our well-being. To save your soul from eternal death He endured the cross; and to give you the full benefit of His cross He provides the cross for you to carry as His disciple, so that you may purify yourself as He is pure. That is, to live with the purpose of being made holy. This is goodness, not safety. Christianity is not a safe religion; it is, in fact, the stuff of which martyrs are made. There is no Gospel without the cross. There is no Gospel without the Risen Christ. To follow the Good Shepherd we must go through the valley of the shadow of death, and fear no evil. We have this hope in ourselves, because we know that when we shall see Him we shall be like Him, for we shall see Him as He is.


Christ also suffered for us, leaving us an example, that ye should follow in his steps.