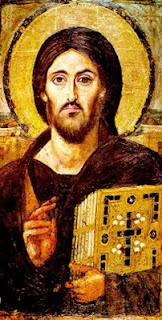 “Wherefore I give you to understand, that no man speaking by the Spirit of God calleth Jesus accursed: and that no man can say that Jesus is the Lord, but by the Holy Ghost.”

We must consider two venues when we think of this basic confession of Christian Faith (Jesus is the Lord): the Church and the World.

We make this very confession in this specific portion of the Creed: “…Begotten of his Father before all worlds, God of God, Light of Light, Very God of very God; Begotten, not made; Being of one substance with the Father; By whom all things were made: Who for us men and for our salvation came down from heaven, And was incarnate by the Holy Ghost of the Virgin Mary, And was made man…”

The Jewish people had once known the ineffable Name of God which is represented by four Hebrew letters that correspond to our Latin alphabet with the letters YHVH (יהוה). This is the Name that is in the original Hebrew text every time that you find the word LORD rendered with every letter in the higher case, that is, in the KJV and other English translations that follow ancient Jewish and Christian tradition. The prophet Jeremiah had said that, upon their return from Babylon, this Name would no longer be pronounced by any man of Judah. The tradition of the Jewish people was to use the word Adonai whenever reading aloud from Scripture the Holy Name of God, that name YHVH. The Hebrew word Adonai, which means “the Lord,” would be substituted by a Jewish reader; and this still is Jewish practice to this very day. The First century Christians who relied on the Greek translation called the Septuagint (generally rendered LXX for the seventy rabbis who translated it) were accustomed to finding this Name of God translated as Kyrios (Κύριος), the Greek word for “Lord.”

So, when we say that Jesus is the Lord, we are saying that this man who walked the earth, lived, died and rose again is Himself to be identified with the God of Israel who made heaven and earth. We are saying that “the Word was made flesh and dwelt among us.” We are confessing the Incarnation. On that day when the apostle Peter said to Jesus, “thou art the Christ, the Son of the Living God,” the Lord answered him, “Flesh and blood hath not revealed this unto thee, but my Father in heaven” If you know, and can say with all your heart, that Jesus is the Lord, you are saying that He is one with the Father. You are saying, therefore, that “the Word was made flesh and dwelt among us.” You are saying that God the Son has taken human nature into His Divine Person, our created nature into not-created Person. You are saying that He has taken what is alien to Him, our human nature, yet all the while remaining wholly other from every created thing as the Word (λόγος) and only begotten Son.

This He has done to save us from sin and death and to forever sanctify and transform human nature, giving us by grace what we cannot by nature have, and so make us partakers of the Divine Nature, as is written by the apostle Peter.1 This is why you cannot say that Jesus is the Lord but by the Holy Ghost. Yes, someone can say the words, perhaps, without conviction. But, to speak of the Incarnation with faith, you must have the Holy Spirit within you making Christ known to you.

This is more difficult. When the ancient persecution of Christians became the law of the empire, to the ears of a Roman Magistrate such a confession, that Jesus is the Lord, became a crime punishable by death. The empire had one lord, and that was Caesar. Furthermore, Christians were taught to obey and honor all earthly authorities, including Caesar; but (and here is the rub) only as far as the informed Christian conscience allows. The Church was taught to obey and honor Caesar’s title as emperor, but not his ultimate title, his claim to total authority over the human conscience. For that must be formed by the word of God, not by culture, custom or politics.
Caesar was believed to be the lord and god of his empire. Eventually, for a Christian to save his life if charged with the crime of Christianity, he had to renounce Jesus. The words in this section of the Epistle show that persecuted Christians had been pressed to renounce Jesus by calling Him accursed in the region around Corinth, like a preview of the persecution that would soon be standard throughout the empire. Once the empire began to enforce the law that made Christianity a capital crime, one had to renounce Jesus as Lord, and then make an offering of incense to the image of Caesar, thus recognizing him as the lord and god of the whole world.

An early form of official persecution had taken place already in and around Corinth. Certain lapsed believers sought to be allowed back quickly into the fellowship of the Church by claiming that the Holy Spirit had guided them to renounce Jesus, even to call Him accursed, in order to be spared. Saint Paul addresses this by teaching that such a notion is impossible. Paul, in this passage, did not set aside the possibility of forgiveness and restoration of those believers into the fellowship of the Church (for God does forgive sins, and so must we); but nonetheless he firmly corrected their unacceptable excuse and wrong idea.
Here in the modern Western world we cannot identify easily with the ancient Christians, who could at any moment face denunciation to the authorities, who might even have their services raided. However, in other lands Christians in our own time are faced with the power of the state, that Beast that has suffered a mortal wound and yet lingers before that wound brings about its inevitable death,2 the power of the state demanding to be acknowledged as lord and god by trampling the human conscience. The Twentieth century saw more martyrs than all previous centuries combined, and we see no change in the world even now except for the fall of one state, the Soviet Union. How poor an excuse it is, therefore, if under a threat no more serious than social pressure, we fail to live up to the dictates of an informed conscience and so declare by word and deed that Jesus is the Lord.
Of course, it is also true that human pride is given no room by the courageous examples of the martyrs; for Saint Paul tells us that if we are faced with death it is only by the Holy Spirit that we have the power to confess Jesus as the Lord. C.S. Lewis once wrote: “Courage is not simply one of the virtues, but the form of every virtue at the testing point.” And, this virtue requires the Holy Spirit giving us grace to say “Jesus is the Lord.”

The confession that Jesus is the Lord means that He is equal to God. It acknowledges, by using His human name, Jesus, that the Word was made flesh. It carries within it the truth that “Christ Jesus came into the world to save sinners.”3 It proclaims in its present tense form that Jesus Christ is risen from the dead, and is alive today. This confession is a manifestation that the Holy Spirit is in us. Jesus is the Lord of life and death, of heaven and earth, and of all things; He is One with the Father. This confession, Jesus is the Lord, foretells that Jesus Christ will come again to judge the quick and the dead, and that His Kingdom shall have no end.
********************
1.*  “Whereby are given unto us exceeding great and precious promises: that by these ye might be partakers of the divine nature, having escaped the corruption that is in the world through lust.  (II Pet. 1:4)”

2. Rev. 13:3 seems to predict a mortal wound to the empire, but survival of its basic evil.