Luke 5: 1-11
When Simon Peter saw it, he fell down at Jesus’ knees, saying, Depart from me; for I am a sinful man... and Jesus said unto Simon, Fear not; from henceforth thou shalt catch men. 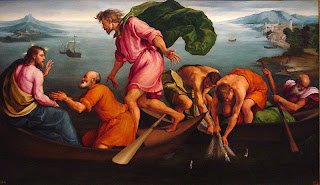 This sermon is a masterpiece and a gourmet banquet. Thank you.

The comparison of the publican and the pharisee also came to mind. Conviction and repentance truly are His work and gifts.