THE SECOND PART OF THE SERMON OF FAITH

Following Part I, here are more of those dangerous Protestant ideas you were warned about--dangerous indeed, to the Devil & his angels.

We have heard in the first par 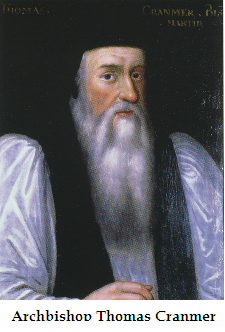 t of this Sermon, that there be two kinds of faith; a dead and an unfruitful faith, and a faith lively, that worketh by charity: the first to be unprofitable; the second, necessary for the obtaining of our salvation: the which faith hath charity always joined unto it, and is fruitful, bringing forth all good works. Now as concerning the same matter, you shall hear what followeth.

The Wise Man saith, He that believeth in God, will hearken unto his commandments. For if we do not shew ourselves faithful in our conversation, the faith which we pretend to have is but a feigned faith: because the true Christian faith is manifestly shewed by good living, and not by words only; as Saint Augustine saith, "Good living cannot be separated from true faith, which worketh by love". And Saint Chrysostom saith, "Faith of itself is full of good works: as soon as a man doth believe, he shall be garnished with them".

How plentiful this faith is of good works, and how it maketh the work of one man more acceptable to God than of another, Saint Paul teacheth at large in the eleventh chapter to the Hebrews, saying that faith made the oblation of Abel better than the oblation of Cain. This made Noah to build the ark. This made Abraham to forsake his country and all his friends, and go into a far country, there to dwell among strangers. So did also Isaac and Jacob, depending, or hanging, only on the help and trust that they had in God. And when the came to the country, which God promised them, they would build no dties, towns, or houses; but lived like strangers in tents, that might every day be removed. Their trust was so much in God, that they set but little by any worldly thing; for that God had prepared for them better dwelling-places in heaven, of his own foundation and building. This faith made Abraham ready at God's commandment to offer his own son and heir Isaac - whom he loved so well, and by whom he was promised to have innumerable issue; among the which, One should be born, in whom all nations should be blessed - trusting so much in God, that though he were slain, yet that Cod was able by his omnipotent power to raise him from death, and perform his promise. He mistrusted not the promise of Cod, although unto his reason every thing seemed contrary. He believed verily that God would not forsake him in dearth and famine, that was in the country. And in all other dangers that he was brought unto, he trusted ever that God would be his God, and his Protector and Defender, whatsoever he saw to the contrary.

This faith wrought so in the heart of Moses, that he refused to be taken for King Pharaoh's daughter's son, and to have great inheritance in Egypt; thinking it better, with the people of God to have affliction and sorrow, than with naughty men in sin to live pleasantly for a time. By faith he cared not for the threatening of King Pharaoh: for his trust was so in God, that he passed not of the felicity of this world, but looked for the reward to come in heaven; setting his heart upon the invisible God, as if he had seen him ever present before his eyes. By faith the children of Israel passed through the Red Sea. By faith, the walls of Jericho fell down without stroke, and many other wonderful miracles have been wrought. In all good men that heretofore have been, faith hath brought forth their good works, and obtained the promises of God.

Faith hath stopped the lion's mouth: faith hath quenched the force of fire: faith hath escaped the sword's edge: faith hath given weak men strength, victory in battle; overthrown the armies of infidels; raised the dead to life. Faith hath made good men to take adversity in good part: some have been mocked and whipped, bound and cast in prison; some have lost all their goods, and lived in great poverty; some have wandered in mountains, hills, and wildernesses; some have been racked, some slain, some stoned, some sawn, some rent in pieces, some beheaded, some burnt without mercy, and would not be delivered because they looked to rise again to a better state.

All these Fathers, Martyrs, and other holy men, of whom Saint Paul spake of, had their faith surely fixed in God, when all the world was against them. They did not only know God to be the Lord, Maker, and Governor of all men in the world; but also they had a special confidence and trust that he was and would be their God, their comforter, aider, helper, maintainer, and defender. This is the Christian faith; which these holy men had, and we also ought to have. And although they were not named Christian men, yet was it a Christian faith that they had: for they looked for all benefits of God the Father, through the merits of his Son jesus Christ, as we now do.

This difference is between them and us, that they looked when Christ should come, and we be in the time when he is come. Therefore, saith Saint Augustine, the time is altered and changed, but not the faith. For we had both one faith in one Christ. The same Holy Ghost also that we have, had they, saith Saint Paul. For as the Holy Ghost doth teach us to trust in God, and to call upon him as our Father, so did he teach them to say, as it is written, Thou, Lord art our Father and Redeemer; and thy Name is without beginning, and everlasting. God gave them then grace to be his children, as he doth us now.

But now, by the coming of our Saviour Christ, we have received more abundantly the Spirit of God in our hearts; whereby we may conceive a greater faith, and a surer trust, than many of them had. But in effect they and we be all one: we have the same faith that they had in God, and they the same that we have. And Saint Paul so much extolleth their faith, because we should not less but rather more give ourselves wholly unto Christ, both in profession and living, now when Christ is come, than the old fathers did before his coming. And by all the declaration of Saint Paul it is evident, that the true, lively, and Christian faith is no dead, vain, or unfruitful thing; but a thing of perfect virtue, of wonderful operation or working, and strength, bringing forth all good motions and good works.

All Holy Scripture agreeably beareth witness, that a true lively faith in Christ doth bring forth good works; and therefore every man must examine and try himself diligently, to know whether he have the same true lively faith in his heart unfeignedly, or not: which he shall know by the fruits thereof. Many that professed the faith of Christ were in this error, that they thought they knew God, and believed in him, when in their life they declared the contrary. Which error Saint John in his First Epistle confuting, writeth in this wise: Hereby we are certified that we know God, if we observe his commandments. He that saith he knoweth God and observeth not his commandments, is a liar, and the truth is not in him. And again he saith, Whosoever sinneth doth not see God, nor know him: Let no man deceive you, well-beloved children. And moreover he saith, Hereby we know that we be of the truth, and so we shall persuade our hearts before him. For if our own hearts reprove us, God is above our hearts, and knoweth all things. Well- beloved, if our hearts reprove us not, then have we confidence in God, and shall have of him whatsoever we ask, because we keep his commandments, and do those things that please him.

And yet further he saith, Every man that believeth that Jesus is Christ, is born of God; and we know that whosoever is born of God doth not sin: But he that is begotten of God purgeth himself, and the Devil doth not touch him. And finally he concludeth, and sheweth the cause why he wrote this Epistle, saying, For this cause have I thus written unto you, that you may know that you have everlasting life, which do believe in the Son of God. And in his Third Epistle he confirmeth the whole matter of faith and works in few words, saying, He that doth well is of God, and he that doth evil knoweth not God. And as Saint John saith, that the lively knowledge and faith of God bringeth forth good works; so saith he likewise of hope and charity, that they cannot stand with evil living. Of hope he writeth thus: We know that when God shall appear, we shall be like unto him, for we shall see him even as he is: And whosoever hath this hope in him doth purify himself, like as God is pure. And of charity he saith these words: He that doth keep God's word and commandment, in him is truly the perfect love of God. And again he saith, This is the love of God, that we should keep his commandments.

And Saint John wrote not this as a subtile saying, devised of his own fantasy: but as a most certain and necessary truth,taught unto him by Christ himself, the eternal and infallible Verity; who in many places doth most clearly affirm, that faith, hope, and charity cannot consist, or stand, without good and godly works. Of faith he saith, He that believeth in the Son hath everlasting life; but he that believeth not in the Son shall not see that life, but the wrath of God remaineth upon him. And the same he confirmeth with a double oath, saying, Verily, verily, I say unto you, He that believeth in me hath everlasting life. Now forasmuch as he that believeth in Christ hath everlasting life, it must needs consequently follow, that he that hath this faith must have also good works, and be studious to observe God's commandments obediently. For to them that have evil works, and lead their life in disobedience and transgression, or breaking of God's commandments, without repentance, pertaineth not everlasting life, but everlasting death, as Christ himself saith: They that do well shall go into life eternal; but they that do evil shall go into everlasting fire. And again he saith, I am the first letter and the last, the beginning and the ending: To him that is athirst, I will give of the well of the water of life freely; He that hath the victory shall have all things, and I will be his God, and he shall be my son; but they that be fearful, mistrusting God, and lacking faith, they that be cursed people, and murderers, and fornicators, and sorcerers, and idolaters, and all liars, shall have their portion in the lake that burneth with fire and brimstone, which is the second death.