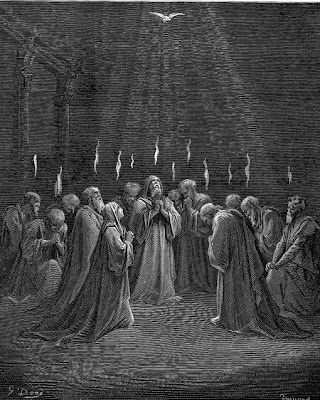 This is the day in which that small band grew very suddenly from five hundred eyewitnesses of the resurrection, to thirty five hundred people, only to continue growing. Men who, just a few weeks earlier, had argued over who would be the greatest, who had hidden in fear, who briefly had doubted Christ’s resurrection until seeing Him face to face, stood tall and unafraid as leaders and as fishers of men. St. Peter, who only a few weeks before had denied the Lord for fear of his life, now rose up as fearless as any hero in battle. Through these men the very same miracles that Christ had wrought, and greater in number than He had done, gave proof of His Gospel; the lame walked, the blind saw, the dead were restored to life, demons were driven out of the afflicted and possessed. What gave such power and courage to these same men who, in the four Gospels, had never come across as impressive?

The answer is simple, but it is so hidden to the eyes of those who cannot believe that it may as well be very complicated. The simple answer is, they were filled with the Holy Ghost.

The very first thing that becomes evident is the sound of them preaching the truth of Christ in foreign languages that they had not learned. We would expect them to speak Aramaic, and to speak and read Hebrew. We would expect that they could address these same people in the Lingua Franca of their day, that international language, Greek. But, they spoke directly to men’s hearts in the local languages of their various homelands, the apparent mastery of the tongues themselves serving as a sign, a miraculous sign that the Logos, the Word made flesh, is the Master, as in the Lord, of all communication. His word is for all people, for every kindred and tongue, people and nation. As man, in his sinfulness, was divided by the sentence of God at Babel, so the scattered peoples of the earth are gathered as one in Christ, who speaks to all in their own tongues.

When we look at today's reading from the Gospel of John, we learn that the Church was not designed to function without the Holy Ghost. He is the Comforter, which is Paracletos (παράκλητος) in Greek; that is He comes to our side, pleads for us and gives us aid. “Comfort,” in the mind of the readers of the King James Bible when it was translated, did not speak of a cushion that helps us to relax and go to sleep. The meaning of the word is found, really, in the second syllable, in fort, as in fortify- to strengthen. We see that fortification in St. Peter, who, knowing the sentence of death that only weeks earlier had been passed on Christ, nonetheless had the courage to rise to his feet and preach. We hear, in his sermon, wisdom from God, as he opened and explained the meaning of the Scriptures, unraveling the mysteries of the ancient prophecies with ease and conviction. This simple fisherman had the power to persuade men’s hearts, suddenly transformed into a master orator. Just as he had, years before, thrown out his dragnet and hauled in large catches of fish, so now he is a fisher of men, converting three thousand people by preaching the Gospel with power and authority.

In St. Peter’s sermon we see, as in every other utterance of the Holy Ghost through the apostles, the clear and straightforward doctrine of Christ exactly as we know it to this day, as we say it in our creeds, as we pray it in the whole of our liturgy, as it is found on every page of scripture, and as it is especially clear, with perfect focus, in the New Testament. This, that we believe today, is the same Gospel that was preached on that day.

Right here, we need to understand what tool the Holy Spirit used to draw in three thousand people in one day. Peter did not erect an altar and celebrate a Mass. He preached the Gospel. Why am I saying this? I am saying it because we need to see what a powerful and effective tool true preaching is. Like Archbishop Thomas Cranmer who gave us our Book of Common Prayer, I believe that it is necessary to have Holy Communion every Sunday and good for the Church to have it every day so that people may have frequent Communion. I would like to see us achieve that ideal some day. But, somehow over the last century, some Anglo-Catholics have decided to embrace the fallacy that the Word and the Sacrament are in opposition, or tension, and that the truly "Catholic" thing is to place an underemphasis on preaching in order to highlight the sacrament. They have accepted a romantic notion in which the Christian priesthood is only about celebrating at the altar. I have news for anyone who believes that: It is not, and never was, the Catholic Tradition of the Church. Read the sermons of the Church Fathers in Antiquity, such as St. John Chrysostom. Good, sound diligent preaching is the Catholic Tradition, not light little seven minute homilies.

And, beginning with St. Peter's Pentecost message, the stuff of proper sermons is the story of who Jesus is, and what He did when he died for our sins and rose again, and that he is Lord and Christ, and will come again. We see, also, beginning with Peter's sermon, that the meat and substance of effective and powerful preaching is Holy Scripture. He showed that the Scriptures of the Old Testament were about Christ. He unraveled from Scripture the meaning of the events he had witnessed, opening the mysteries formerly hidden, of Christ's betrayal, passion and death, and of his having risen again. He showed that the Scriptures are about Christ, and that by them we know the Gospel. Good preaching is not drawn from personal anecdotes, and it is not designed to impress people with worldly wisdom from academe. It is aimed at the mind and at the heart, calling all men everywhere to repent, and it is the means by which faith comes, for it is the proclamation of the Word of God.

Peter had changed. He had been a natural man (ψυχικός psychikos-soulish) unable earlier in his life to understand why the Christ, the Son of the Living God, was ready and willing to take up the cross; later he was afraid and denied the Lord three times. But, now he stands on his feet boldly, not afraid of death, having his mind focused on the truth, able to understand and know from Scripture everything that had unfolded and was unfolding. He had been a disciple for more than three years, but now was closer to Christ than at any time when he beheld him with the eyes; for he was now part of the Body of which Christ is the Head. Many a time Peter had stumbled and tripped over his own tongue, and had failed to speak the right words on the night in which his Lord was betrayed. But, now he spoke with more clarity, more power and more authority than any prophet of the Old Covenant. He delivered the first Christian sermon, as he was now the fisher of men Christ had foreseen; for his dragnet of words brought in about three thousand souls.

None of this was man-made. The best efforts of organization could not have produced it; the most detailed planning could not have pulled it off. No human effort could have brought it forth in a day, because the New Covenant people, the Church, manifested on the Day of Pentecost, was chapter two of the Word made flesh. The Body of Christ now came into the world.

Frankly, in light of the foolishness of sinful men, it is very obvious that God's power and grace have never depended on anyone less than God himself. Never think that we, as the Church, have succeeded in anything simply by our own human cleverness, or our best laid plans, or our own strength. We have an organized structure, but the permanent shape of that structure was revealed and enacted by the Holy Spirit. The whole life of the Church is charismatic (χάρισμα); from the receiving of Scripture to the Sacraments, from the Apostolic Succession to the faithful service of each member.

Indeed, St. Paul, speaking in the context of spiritual gifts, even goes as far as to call the Church by the name of Christ himself: "For as the body is one, and hath many members, and all the members of that one body, being many, are one body: so also is Christ...Now ye are the body of Christ, and members in particular." (I Cor, 12:12, 27) So, I have not spoken carelessly in saying that the Church is part two of the Incarnation. The Jesus who goes about now doing good and healing is none other than the Body of Christ and members in particular. He does his work through you, through his Body the Church, by the Holy Spirit, the other Comforter who is with us and in us.