A matter of emphasis 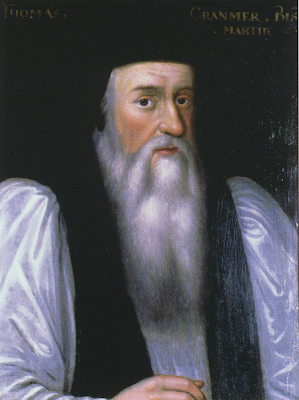 "Even so doth the substance of bread and wine remain in the Lord's Supper, and be naturally received and digested into the body, notwithstanding the sacramental mutation of the same into the body and blood of Christ. Which sacramental mutation declareth the supernatural, spiritual and inexplicable eating and drinking, feeding and digesting, of the same body and blood of Christ, in all them that godly and according to their duty, do receive the said sacramental bread and wine...And [St. Ambrose] concludeth the whole matter in these few words: 'If there be so much strength in the words of the Lord Jesu, that things had their beginning that never were before, how much more be they able to work, that those things that were before should remain, and also be changed into other things!' Which words do show manifestly, that notwithstanding this wonderful sacramental and spiritual changing of the bread into the body of Christ, yet the substance of the bread remaineth the same that it was before." Archbishop Thomas Cranmer, A Defence of the True and Catholick Doctrine of the Sacrament of the Body and Blood of our Saviour Christ, Book II chapter XIII

In a comment on my recent essay about Cranmer's sacramental theology and that of Pope Benedict XVI, Archbishop Haverland wrote: "The Body and Blood are present even if not perceived or received by faith. Those who reject this objective Presence part company with both Saint Paul and with the great tradition of the East and West." In his book, Archbishop Cranmer never quoted the contemporary Reformers on the continent, but only the Bible and the Church Fathers, holding to the Catholic Tradition, declaring in his title that his purpose was to defend the Catholic doctrine. Therefore, he had no interest in quoting his contemporaries, for his intention was to declare the ancient teaching of the Church, and so he drew only on ancient and universally recognized authority. As we see, in the above quotations Cranmer does affirm the "sacramental mutation " and "wonderful sacramental and spiritual changing" of bread and wine into the body and blood of Christ. His only contention in doing so, defending the Catholic doctrine against the teaching of the Church of Rome in his day, was to make clear the nature of the change, that it makes possible the "supernatural, spiritual and inexplicable" receiving of Christ's body and blood.

In this, ending his point as he does by emphasizing the sacrament as received by the faithful Christian, we may see a harmony in what follows later in the book:

The first of these two lines seems to contradict both the above quotations and the quotation that follows it. He declares that the bread and wine are changed into the body and blood of Christ, and that he is there, meaning present, in them. His only difference with the Roman doctrine, as generally taught and understood in his day, seems to be that Christ's presence is not due to a physical change in the elements, a replacement of the bread and wine with his flesh and blood though disguised in order that people may eat and drink them; but that His presence is in bread and wine as a spiritual rather than physical reality, truly supernatural and inexplicable, but genuine and real.

Yet, the line, "but we say, according to the truth, that he is in them that worthily eat and drink the bread and wine," is the line that gets all the attention from those who seek to accuse him of Zwinglianism, of Real Absence concerning Christ's presence, or of Receptionism. It is the very frankness of his apparent self-contradiction that drives home the real point: His was a matter of emphasis, (since he would not have contradicted himself) and this emphasis would mark the writing of early Anglicans right up until the time of Archbishop Laud.

What we find is not a rejection of Christ's presence, and not a rejection of change. He affirms "sacramental mutation" as a reality, "this wonderful sacramental and spiritual changing of the bread into the body of Christ." But, the weight of Anglican emphasis taught the common people that the service was not merely the Mass; it was also Holy Communion, after centuries in which priests ate and drank the sacrament supposedly on behalf of the laity, who lived most of their lives in the presence of the sacrament only to see it lifted up, to gaze upon it while it was carried about (see Article XXV), rather than receiving it. Now, in restoration of the true and Catholic doctrine, they were all both invited and commanded to partake of Christ by faithful eating and drinking of the same. Again, to quote from Archbishop Haverland's comment, "Neither should we forgot that the Reformation was correct in saying that the Eucharist is primarily about faithful Communion rather than uncommunicating spectacle (though He didn’t say we could not have both at times)." In other words, it was a matter of emphasis.

It is bad enough that our enemies use the words of our fathers out of context, trying to make our own people lose faith in their heritage, even in the orders of their priests. It is worse when Anglicans themselves aid the effort by repeating the slander, even if beating their own breasts all the while. Indeed, the emphasis of the English Reformation was correct. Once we see that, we can grow in our understanding without feeling the need to question or doubt the validity of our patrimony, or to reject it for the waters of the Tiber.
Posted by Fr. Robert Hart at Wednesday, April 21, 2010

I had to quote your whole statement, for you said it so well. A hardy 'Amen' Canon Tallis.

Fr. Hart, thank you for more unpacking of the theology of the sacrament of the Lord's Supper via Cranmer. I have been very helped by his writings on this topic and also very much by yours.