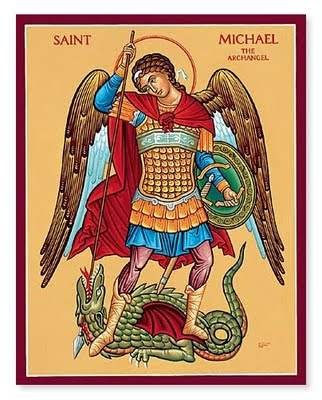 On the subject of Saints (with a capital "S"): I would be most grateful for a discussion by Frs. Hart and Kirby and Ed on the classical Anglican position on invocation of Saints and veneration of relics.

I don't have too much difficulty with Article XXII, as I read that as a repudiation of medieval excesses, but I do feel some uneasiness about actual, traditional Anglican practice in these areas in comparison to the practice of our RC and Orthodox brethren - and indeed of Christians in the undivided Church going right back to its early days. It seems to me that the Book of Common Prayer countenances not much more than remembering Saints as historical heroes of the faith, not as still active and accessible, specially gifted, agents of God's grace. None of the prayers in the BCP relating to the saints allows us even to ask for their prayers (so I am always careful to tack on, e.g., "St. Michael and All Angels, pray for us"). And, unlike the other Catholic churches, Anglicanism has no official, or for that matter unofficial, way of recognizing new Saints (i.e. with a capital "S"); the closest I’ve heard anyone come to it is to attach the pious appellation “blessed” (with a small “b”) to some virtuous Anglican of the past – e.g. C.S. Lewis. It's true that we still call the past great heroes of the faith "Saint" this and "Saint" that, but, in fact, hasn't Anglicanism largely denuded the word "Saint" (with a capital “S”) of its traditional Catholic meaning and devotion so that, for example, the "Anglican Church of St. Peter" doesn't mean, in practice, much more than the "Dr. Elmer P. McGillicuddy-Olé-Biscuit-Barrel Anglican Church,” or the “Anglican Church on the corner of 38th Street and 45th Avenue (3 blocks west of Henry’s Chocolate Shoppe and Hamburger Emporium)"? And is it not true that, officially at least, traditional Anglicanism abandoned the devotions associated with pilgrimages and shrines? Is there not really a danger for us that the "communion of saints" can become nothing more than a redundant abstraction?

And as for relics, I know one has to be very careful not to fall into idolatry and superstition here – but surely, for all the fakes, there have also been genuine relics that have transmitted God’s grace, a phenomenon for which there is biblical warrant – e.g. in the story of the woman who was healed of her haemorrhage by touching Jesus’s robe, and in the reference in Acts 19: 11-12 to St. Paul’s healing cloths. It’s been at least two decades since I read Bicknell, and I no longer have him to hand, but in his commentary on Article XXII I think I remember him rejecting the idea of venerating relics as instruments of grace and simply dismissing the Acts 19 passage as having any probative value.

As for Biblical support for relics, remember the bones of Elisha restoring a dead man to life in II Kings.