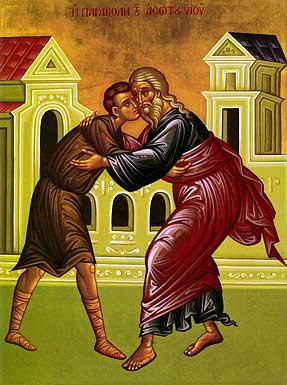 The Parable of the Prodigal Son could as well be called The Waiting Father, and it could also be called The Elder Brother. Each of the main characters is necessary to the story. This was the third parable in this chapter, and each tells the same story. One is the shepherd who leaves the ninety-nine sheep and searches for the lost sheep until he finds it, and the other is the woman who searches until she finds the lost silver coin. Then this longer and more compelling story of the father who loses his son, and then receives him back. Make no mistake, these are all really one story. The loss of one person to sin and death is revealed to be God’s own loss; hence there is joy in the presence of the angels of God when the sinner repents, that is, the joy of God beheld by the angels (spoken in our terms to reveal the great mystery of God’s love for fallen mankind, and of that particular love for each one who is lost).

Does anyone anywhere fail to understand the prodigal son himself? Can any of us look at the warnings that St. Paul draws from the Old Testament (in today's Epistle) without a conviction of sin? Does anyone really fail to understand the people of Israel in the wilderness? I know that complaining or murmuring, idolatry and lusts can all be frightening subject matter, and that in one sense the promise that we will never be tempted to sin without a divinely appointed escape, can be just as troubling as it comforting. It is comforting to us to realize we can face the temptations of the future because God provides the escape; but, it also means that our past failure to take that escape makes each of us all the more culpable- doesn’t it? I did not need to study sin as a theological subject in order to understand it. I have to study holiness in order to understand it, and faith and everything to do with the virtues that only grow in us when we give in to the Holy Ghost. But, sin I understood only too well, and the only thing study could offer for that subject was to clarify the facts, all of which came easily. Have any of us lived without the realization that we have wasted the goodness of God on very unworthy and temporal things? I wish I could identify with the saints who love God, and with the angels in glory who behold His face in all good conscience. But, it is only in and after Confession that I have ever come to understand even a glimpse of them. I wish I Corinthians chapter thirteen, the chapter on charity, described my own character; but, it doesn’t.

“But if we walk in the light, as he is in the light, we have fellowship one with another, and the blood of Jesus Christ his Son cleanseth us from all sin. If we say that we have no sin, we deceive ourselves, and the truth is not in us. If we confess our sins, he is faithful and just to forgive us our sins, and to cleanse us from all unrighteousness. If we say that we have not sinned, we make him a liar, and his word is not in us.” I John 1:7-10

Yes, all of us, especially the most devout and believing, should identify readily with the prodigal son who came to himself, and returned home. Then we come to another character, the elder brother. I have no doubt that Jesus had the Pharisees in mind, those who believed they were righteous and despised others, and who were critical of the Lord’s willingness to go into the home of a sinner as the physician goes to the sick- that is, to restore them to health. The elder brother has his own priorities, none of which are in harmony with the love his father has for the lost brother, that is, his lost son. Furthermore, the elder brother does not realize that by this very attitude he is every bit as far away from his father’s heart as his brother is from his father’s house. He too is estranged from his father, but deceives himself by thinking that it is enough that he is at home. And, simply by living at home he believes he does enough, though never standing with his father who watches and waits for the lost son, and never sharing in his father’s pain and tears, and finally, not rejoicing when his father rejoices. What is enough for us? Is it enough to be involved with the business and activities of the Church? Is it enough to be active in its plans? How important is it for us to seek out lost souls and help them return home to the father’s house? When people come in faith and are welcomed back by the Father, are we full of joy? Do any of us dare to judge whether these people who come are the “right sort” of people, that is, “people like us?” Is it more important that the Church make us happy, even if that means that it does not grow?

I have seen plenty of elder brothers, individuals who don’t want to mix with the wrong sort of people in Church, and who would not want to be in Heaven with such people. Remember the man in The Great Divorce by C.S. Lewis, who would not enter Heaven because he saw there a notorious sinner, in fact a murderer. His objection was that he didn’t need the “bleeding mercy.” But, the repentant man, who had been a murderer and was now redeemed and among the saints in light, pleaded with him that the bleeding mercy was exactly what he needed. But, the man returned to the gray city, that is Hell, rather than associate with the kind of rabble who had been welcomed into the Father’s House. First John the Baptist, and then the Lord Himself, called upon the most notorious sinners to repent. Jesus spoke often of such notorious people as tax collectors and prostitutes who had repented at the preaching of John, and at His own preaching, and were now following Him. Boldly, He goes to the home of Matthew the tax collector, and later to the home of Zacchaeus, always bringing sinners to repentance. He allows the sinful woman to wash His feet with her tears and dry them with her hair, over the unspoken but real objection of his Pharisee host. The people He did have real conflict with, however, were the Pharisees, the religious hypocrites who disapproved of the Lord’s mercy on repentant sinners. For some people it is more important to feel superior to others than to become acquainted with the Father’s heart.

The elder brother cannot follow the simple instruction of St. Paul: "Do the work of an evangelist."

Finally, here is the father in the story. When we think of the Trinity it helps to remember how St. Paul speaks of the main attribute we know in our relationship with each Divine Person; each an attribute that is Divine, but each revealed more clearly in identification with what we are taught about each of the Persons. “The grace of the Lord Jesus Christ, and the love of God, and the communion of the Holy Ghost, be with you all. Amen.” (II Cor. 13:14) We cannot understand the Father as He is revealed unless we identify Him primarily with love, that is agape or charity. It is this love that is revealed in and by His Son, most powerfully and manifestly on the cross. Throughout eternity it is the scars of His Passion, still visible in the resurrected Christ, that will always remind us of the love of God, whereby He gave His only begotten Son for us. It is that love manifested by the Son of God as he took away sin and conquered death. The prodigal son does not ask for his due as a son, and would settle for being only a mere hired servant. Such is true repentance. The Father restores the lost son, slays the fatted calf to celebrate, and has his own joy, the joy of receiving back a son who was lost and is found, was dead and is alive again. The grace of God meets us on better terms than we can ask, extends forgiveness that is, itself, prodigal but never exhausted. This parable teaches us that by the grace of God in Jesus Christ and the love of God shed abroad within us by the Holy Ghost, we must remain in the Father’s house, and also come close to the Father’s heart for the lost.
Posted by Fr. Robert Hart at Saturday, August 08, 2009