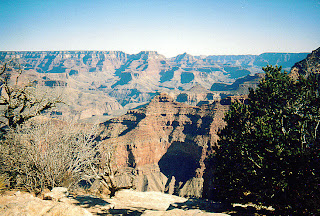 (The following is not theological, neither is it particularly relevant to the issues. I wrote it last year and stored it away on my computer. Since it does not address the issues it would not be right for Touchstone. But, for those who want to know, our move back to Maryland is not due to a lack of appreciation for Arizona. Having lived here, I am a Westerner for life.)

In March 2006, after one hundred and forty five days of drought, rain fell on the Arizona desert valley of Phoenix, and Scottsdale. When the clouds had lifted, the far away mountains, visible from the town of Fountain Hills, were covered with snow. Stretching eastward beyond the Indian Reservation, past thousands of tall Saguaro cactuses, the frozen white Four Peaks Mountain reflected the western glow with shining ocean blue amid traces of pink. The eastern sky was soft purple, while to the west, bright orange burned the horizon. With magnificent colors that rival the work of any painter, the setting sun makes light shows here.

The beauty of Arizona captivated me in my first minutes upon arrival, driving from Sky Harbor airport into Phoenix the previous June. Never before had I seen terrain of this kind. Mountains sprung up around every turn, covered with short thin bushes, sitting back behind the cactus plants that nature spaces with the care of a gardener, making perfect order for the pleasure of the eye. Even the buildings seemed as if they must have grown from the desert floor, having been constructed according to strict codes that preserve a continuity of nature and architecture.

Why should it be otherwise? Why should any town be ugly, sitting as an intruder that looks alien to the landscape? Man is a part of nature, no less than beavers in their dams, birds in their nests and bees in their hives. And, he possesses reason as the living image of God. The great cathedrals testify that we are better architects and carpenters than the beavers, the birds and the honey-bees. Bach’s The Art of Fugue, Mozart’s Requiem, and the simple hymns and songs of the countryside put the best songbirds to shame. Ugly towns, dirty and noisy, come as well from human genius. Yet, they must express more the original sin that has distorted us. Why should not houses and shops, churches and schools, fit the environment no less than the hills and the plants, and the tan pebbled desert floor?

Two months after I saw this place for the first time, my youngest son (in his teen years) was awakened to the beauty here when we crossed the state line on Route Forty from New Mexico. Right away mountains appeared that were made entirely of stone, and that seemed to have been carved by a sculptor who decorated them with straight lines like many shelves containing knick-knacks. The order of it makes a pattern that pleases the eye, because it seems right to the soul. The weariness of a long drive from Maryland wore off, when we all – my wife, two of our sons, and our dog- deviated from our journey in order to see the Painted Desert, and within that wonder another wonder yet, the Petrified Forest.

In that desert the wood turned to stone. The place seems like an alien setting on a different world, a far away planet not familiar. Little round hills are everywhere, spiraling up to a point, each painted with lines of color, contrived, harmonious and wondrous. The lines appear composed to be aesthetic. Man made plaques sit here and there at the opening along the road to each expanse into an ancient canyon, looking down at millions of years of artistic composition. The plaques explain the process, the millions of years of water levels and drainage.

And, the plaques describe, as well, the process by which the many pieces of wood have been petrified; how they came to be wood to the eyes but stone to the touch. Still, we must wonder. Must not the trees have seen the face of the Medusa, with the snakes as her hair? But, it cannot be so, for this is no curse. It is a work of beauty, a miraculous preservation that favored specific trunks and branches to be Incorruptibles, while the rest of the trees die to waste away.

Further to the west, another day’s journey, the Grand Canyon also contains the written plaques describing the process, never using expressions that speak of art, such as “methods” and “techniques”. Somehow, the description of water erosion over epochs and millennia, is taken by the blind as an explanation. But, those whose eyes are open to see the Grand Canyon, its order and harmony, its lines and compositions, know the difference between a description of a process and an explanation.

In my worst nightmares I can see such plaques in a very different setting. “Over a period of several months, the eggs of various birds were combined with natural oils and ground materials from vegetation known as flower peddles. These were applied to the surface of canvas resulting in a chemical reaction preserving the materials in a composite form.” And, such a plaque, in the nightmare, sits directly under the Mona Lisa. The plaque explains with precision what did in fact occur, but never speaks of technique or creativity, of planning and composition.

To the blind this impressive plaque is an explanation, such a powerful explanation that necessity requires no thought of an artist. The plaque writers are very learned, and yet their plaques could not give places such names as the Painted Desert or the Grand Canyon. Descriptions of process are not sufficient to the task of measuring inspiration. How can they speak of painting a desert, and of the grandeur of a canyon?

What is this process that made the wonders of Arizona? The process tells a very intriguing story, indeed a true story. But, it pales in comparison to the simplicity of the explanation. That explanation was all the more wise than every plaque and description, as penned by G.K. Chesterton, when he told us “the tree bears fruit because it is a magic tree.” The colors of the sunset in the Arizona desert where I live are produced by natural processes, all of which scientists describe quite well. But the explanation is much wiser and simpler. God has been painting again, as He does every day at this time.
Posted by Fr. Robert Hart at Wednesday, May 09, 2007

Unless I've missed it, you still haven't told us about what is taking you back to Maryland.

Thanks for that post. I think it would work for Touchstone.

Many thanks for posting that. 35+ years ago, I spent a few months in Tucson. While events have never taken me back to Arizona except for a rare visit, I have never been able to forget the magical beauty of the desert. A subscription to Arizona Highways is helpful as a "maintenance dose" for the addiction.

Details will follow, but, for now, it is clear to me that my ministry must pick up in the place where it started, and in the church where I was ordained. I have done all that I can with this mission out here.