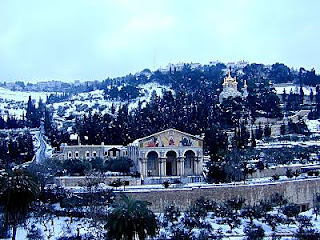 Early Christian pilgrims located the Garden of Gethsemane at the bottom of the slope of the Mount of Olives opposite the Temple Mount. A Byzantine church, and later a Crusader and a modern one were built successively on the site where it is believed that Jesus prayed to the Father hours before his crucifixion. The modern Church of All Nations has a beautiful mosaic on its facade. Inside, in the sanctuary before the altar, a large section of rock has been left exposed, where tradition holds that Jesus prayed. Photo: BiblePlaces.com

Tonight I leave for Jerusalem on assignment for three weeks, my second time working in the Holy City in less than a year.

The last time I went, the Palestinian people had just shocked themselves and the world by electing a parliament with a massive majority for the Islamist movement Hamas, a choice that has brought even more grief to them in the form of a financial embargo and aid boycott by the West. At the same time, Israel was preparing to elect its own parliament, which resulted a short time after I returned home by Ehud Olmert becoming prime minister.

The situation has deteriorated ever since. The Palestinians, divided between supporters of Hamas and those of the relatively moderate president and his Fatah party, Mahmud Abbas, are on the verge of open civil war.

For now, I would like to focus on the peaceful winter scene on the Mount of Olives and the Garden of Gesthemane. I don't know if any snow will await me on my arrival, or fall while I am there, but I expect that my three weeks will be filled with news of yet more discord and killing.

I don't know how much time I will have to post while I am away, but hope to share the occasional thoughts on my experiences -- the things I see, and the people I meet.

Please pray for me and for the people among whom I will be living and working -- Israelis and Palestinians -- that somehow they might eventually choose to live in peace with each other.
Posted by Albion Land at Monday, January 08, 2007