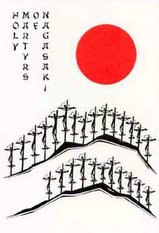 February 6 is the commemoration of the Martyrs of Nagasaki.

Twenty-six Francisan and Jesuit missionaries and Japanese converts were crucified together by order of Toyotomi Hideyoshi.

Following their arrests, they were taken to the public square of Meako to the city's principal temple. They each had a piece of their left ear cut off, and were then paraded from city to city for weeks with a man shouting their crimes and encouraging their abuse.

The priests and brothers were accused of preaching the outlawed faith of Christianity, the laity of supporting and aiding them. They were each repeatedly offered freedom if they would renounce Christianity. They each declined.

The story of one of them, Louis Ibaraki, is particularly touching, as he was a year younger than my own son is now when he was martyred. He was the nephew of Saint Paul Ibarak and Saint Leo Karasumaru and an altar boy for the Franciscan missionaries. He was noted for maintaining his high spirits and encouraging all around him during the torture and forced march to Nagasaki.

The Japanese style of crucifixion was to put iron clamps around the wrists, ankles and throat, a straddle piece placed between the legs for weight support, and the person pierced with a lance up through the left and right ribs toward the opposite shoulder

May I suggest a reading on this. Even though as you know I follow not your path Albion, this book could leave no one unmoved.

The Samurai by Shusaku Endo, set in the 17th Century, tells the tale of a Samurai sent as an emissary along with a Franciscan missionary to Spain.

In his trip he finds himself struggling hard to hold onto his pagan beliefs.

To say any more might spoil it, but the story itself is based on true facts.

Do you have a copy?

Absolutely, you may borrow as long as you are the kind that returns books :)

I'll drop it off for you at Finbarrs next chance I get.

This certainly won't help my prospects of getting the book, but I am reminded of an old saying:

"There are two kinds of fool in this world: those who lend books and those who return them."

I guess I am doubly a fool then!

In case that went over your head, tomorrow lunchtime: earliest I can do under current obligations. I will be there whether you are or not, so make sure to come by when you can to pick it up.